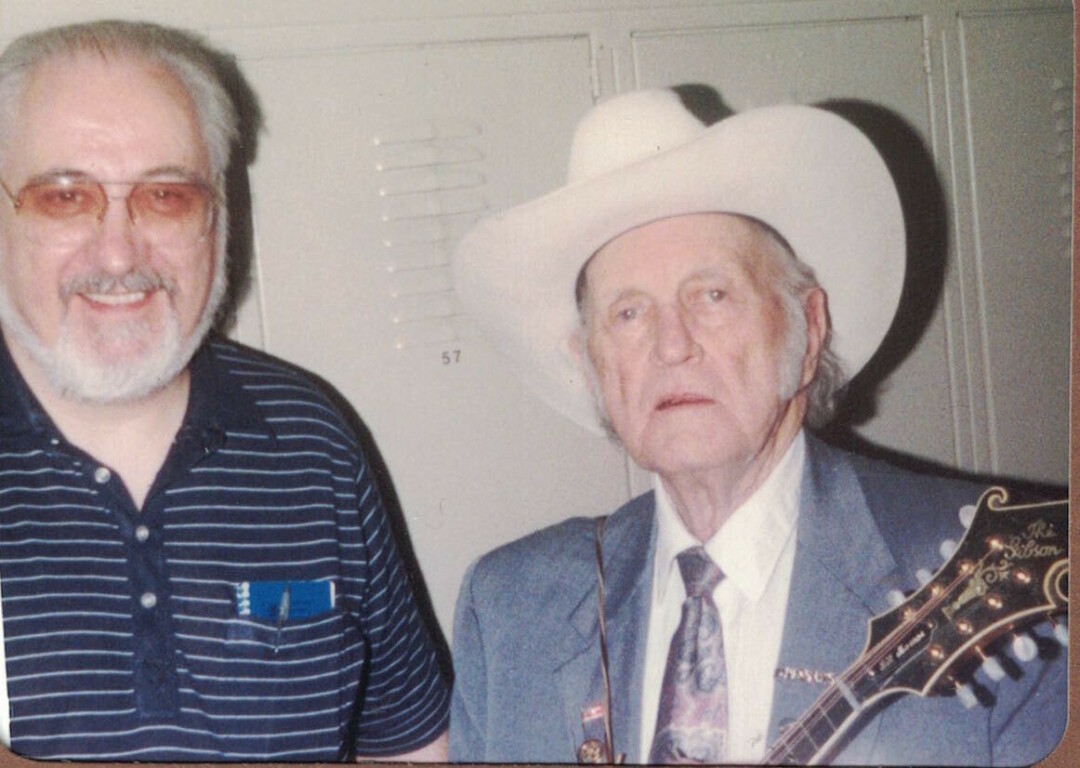 Ken Johnson with Bill Monroe, the father of bluegrass.

I feel like a newscaster who needs to explain why he’s here: “I’m Mike Lassiter, filling in for Dan Koski, whom I just shot and killed for sleeping with my wife.”

I’m Kenneth Johnson’s youngest son, and if you’re a reader of his “Johnson’s Porch” column, you’ll be disappointed to learn that, with his passing and his reverse mortgage, the porch now belongs to Wells Fargo.

My father’s “Porch” columns often fell into two categories: (1) Stories and rants I’ve heard for years, and (2) stories that, much like human physical contact, were shockingly new to me.

See, my father could talk relentlessly about some distant second-cousin he briefly met in 1956. But when I asked him about, say, his time in the National Guard, it was always, “Oh, that was too long ago. I don’t remember.”

So here’s what I know: Dad was born in 1935 in a house that was originally built to house chickens. Then stuff happened, and he became a bartender at Someplace Bar before becoming a chemist for Potlatch (now Sappi) in 19-something-or-other until Whenever It Was.

He married Mom in the Long Ago, and raised five kids. “None of which,” he liked to brag, “are currently in prison.”

He made a name for himself playing in local bands, doing 1950s-era rock standards and a lot of country music, thus cursing his youngest son with the plague of knowing “Elvira” by heart.

Following the passing of my mother in 2017, Dad gratefully kept himself occupied by writing for the Reader, supplying an occasional column that would make him the talk of the town, or at least among the local nursing homes.

So, yeah, you can see why I wasn’t asked to write his obituary.

I’ll leave you with this memory: Sometime in the mid-1970s, my father went on a business trip to Rochester, NY. When told of my father’s imminent departure, I began to scream and cry, which I continued to do the entire trip to airport.

As he left for his flight, I pressed against the glass and wailed, “Don’t leave us, Daddy! We love you! Don’t leave us!” He smiled and waved, secure in the knowledge that I was now Mom’s problem.

I finally stopped crying halfway back home, and the trip was otherwise somber and silent.

Here’s the part of the story that no one believes, but I swear it’s true: At no point during this trauma did anyone turn to me and say, “You do know he’s coming back, right?”

Seriously. I mean, they must have mentioned it at some point beforehand, but I suspect it went something like:

In any case, Dad felt a twinge of remorse at my abandonment, so he called us as soon as he touched down in NY – and I was too busy playing with toys to come to the phone. “Daddy who?” I asked.

But now he’s left me again, and for sanity’s sake, I’ll try to imagine that the trip is temporary, and that my best friend and #1 fan (well, #2, after myself) will someday return from his extended business trip. I admit it would scare the crap out of me if he calls. But I’d accept the charges anyway.