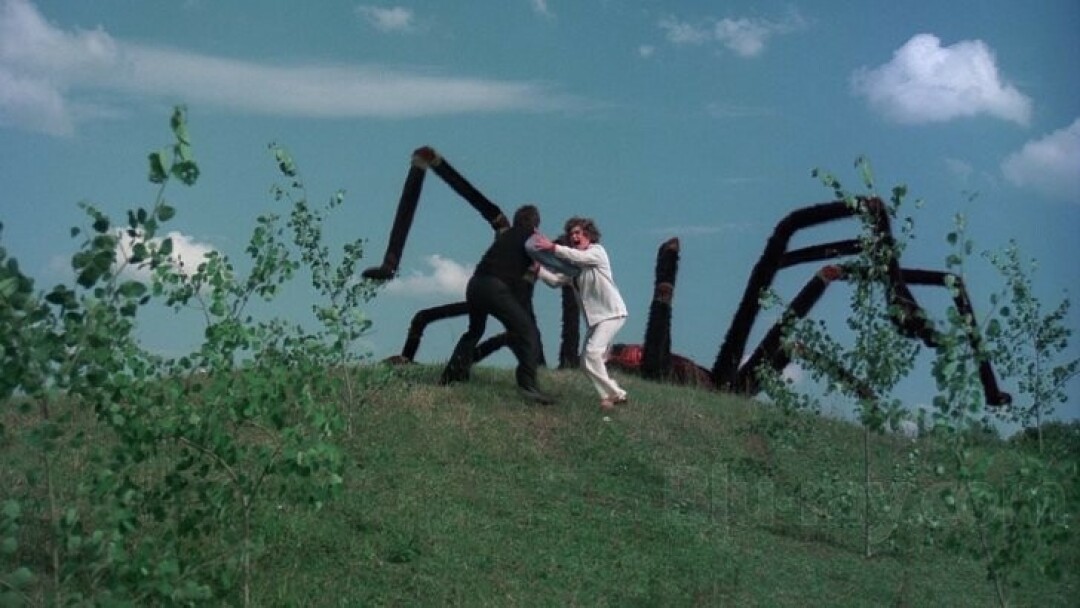 Ever since I first saw Bill Rebane’s 1975 The Giant Spider Invasion years ago, I hoped that actors Barbara Hale and Steve Brodie had stunt doubles for the scene where they first see a giant spider, and in their desperation to escape, clumsily tumble down a hill, and the much larger Brodie rolls right over the former Della Street (yes, I grew up watching late-night re-runs of Perry Mason).

I have to admit that was the most horrifying moment in the whole movie for me, and, finally, I have had it confirmed by director Rebane that everyone did their own stunts, which means Brodie actually did role over Barbara Hale.

“Yes, they did their own stunts,” Rebane said recently by telephone from his home in Saxon, Wis. “Thank God nobody got hurt.”

Well, he explained there was one minor injury near the end of the filming when the spider was blown up and a young photographer grip injured his right arm.

On top of that, for the past two years Brandon Johnson of the Merrill Historical Society has been collecting items and information for an exhibit that has a grand opening on Oct. 22 – Bill Rebane’s Hollywood Midwest, with details on Rebane’s The Shooting Ranch sudio in Gleason, Wis., where he made The Giant Spider Invasion and others such as The Demons of Ludlow and Blood Harvest, starring Tiny Tim as a bizarre clown.

Rebane will be on hand for the exhibit opening the morning of Oct. 22, which is followed by a 1 p.m. screening of The Giant Spider Invasion, followed by his 1988 feature Twister’s Revenge at 3p.m.

Rebane said he was contacted about two years ago by Brandon Johnson, curator at the Merrill Historical Society about doing something on Rebane’s feature movie studio.

“And they went ahead and started collecting archival materials, some from myself and some from third-party sources,” Rebane said. “I am absolutely amazed the last time I was down there by the imagery they’ve collected, and movie posters of The Giant Spider Invasion from almost every country in the world. They are all framed and very presentable. I was really impressed with the work.”

Rebane also expects to be reunited with folks from the area who were involved in the making of the movie.

“We put the word out when we were making it, and in those days, it was exciting having a picture with some Hollywood names in it,” Rebane said. “I asked community members to take part in it and be involved. So I have to really appreciate that the community came out and they made it happen. Brandon Johnson has contacted many, many people that were involved in production.”

But Rebane said he never knows when he might sun into someone who was involved. It happened recently when he held a garage sale.

“This was just on Sunday,” Rebane said. “A couple of walks in and the guy says, ‘I know you. I was one of the kids that ran through the ballpark from the spider.’ Oh, wow! That was awesome.”

Rebane is proud that The Giant Spider Invasion has achieved cult status and stands as the most memorable of the films from The Shooting Ranch, and he begrudgingly credits Mystery Science Theater 3000 for its 1997 riff on his movie.

“Actually, because of their global exposure, their riffing made the movie even more famous, I think,”he said. “Not that I liked everything that happened.”

Rebane certainly never thought he was making a film for the ages. In fact, when he saw the giant spider eyes on the single giant spider, he told himself, “This will never play.”

“I think we were lucky if we had $10,000 for the manufacturer and the making of the spider,” Rebane said. “There were no digital effects available or computerization. I think that’s another reason it took off on its own,” he said. “It was great to see in those days, to make something like that without a big bunch of special effects.

Rebane credits actor and Hollywood dialogue coach Robert Easton for introducing the campiness that seems to have propelled the film to cult status.

Rebane said Easton read the original dramatic script and said, “This will be the biggest flop ever.” Easton agreed to rewrite the screenplay.

“Every day when we got two pages of a screenplay, if we were lucky, he would come and say, ‘What do you think we should do with this theme? What if we do this or this and that?’”

So there was a good deal of improvising on the set. For example, when Alan Hale Jr. (The Skipper), who spends much of his time in this film on the telephone, sees the spider for the first time and says the spider is much bigger than Jaws, that’s improvisation.

The second line of the movie always brings a cringe from me– it’s Alan Hale uttering his “Little buddy” line from Gilligan’s Island.

Rebane said there is so much about the movie that makes him cringe, he wishes he could issue a better director’s cut.

“But I can’t. The footage isn’t there,” he said. “We didn’t have the budget to shoot more.”

Rebane revealed that he has been in touch with some Los Angeles contacts about a remake or sequel to The Giant Spider Invasion.

Would he be involved in the production, or does he just want to see it happen?

“Well, I have two choices. I think I’m a little too old to start producing a major picture, which I wouldn’t even consider as low-budget,” he said. “I mean, if it’s done right, the proper effects could be dynamic and it’s already got a proven track record worldwide. Maybe a company like Netflix could do it. I don’t know yet. I hate the thought of even trying to raise money for something like that. But it raises a lot of interesting prospects.”

He also mentions that his youngest son, Randy, who lives in Florida, is the only one of his four children who continued working in the film industry after working for their dad on The Shooting Ranch.

“I hope he has the balls and guts to tackle something like this, and I will give him all the help I can,” he said.

Here’s the press release on the event:

Thirty years of Wisconsin movie history will be remembered by the Merrill Historical Society on Saturday, Oct. 22, 9 am to 1 pm, with the grand opening of the exhibit, Bill Rebane’s Hollywood Midwest.

Archival materials and memorabilia cover the now-cult films from the 1960s through ‘80s, including Monster A-Go-Go, Rana: The Legend of Shadow Lake, Blood Harvest starring Tiny Tim, and one of the top-grossing films of 1975, The Giant Spider Invasion.

One of the original giant spiders, recently saved from destruction, will be on display, rejuvenated to its original state to show how difficult it was before the digital age to create special effects for creature features.

Rebane’s The Shooting Ranch studios of Gleason, Wis., flourished for more than a quarter of a century as the only full-time feature film studio in the Midwest.

Curator Brandon Johnson has been researching this new exhibit for more than two years. Listen to the fascinating stories about Bill and the people he worked with to make many feature films, several in Lincoln County with local citizens as extras.

The Giant Spider Invasion will screen at 1 pm at the Northwoods Veterans Post banquet facility, 601 Johnson St. in Merrill. This will be followed by Rebane’s 1988 feature Twister’s Revenge at 3 pm.
The Merrill Historical Society is located at 100 E. 3rd St., Merrill, Wisconsin.