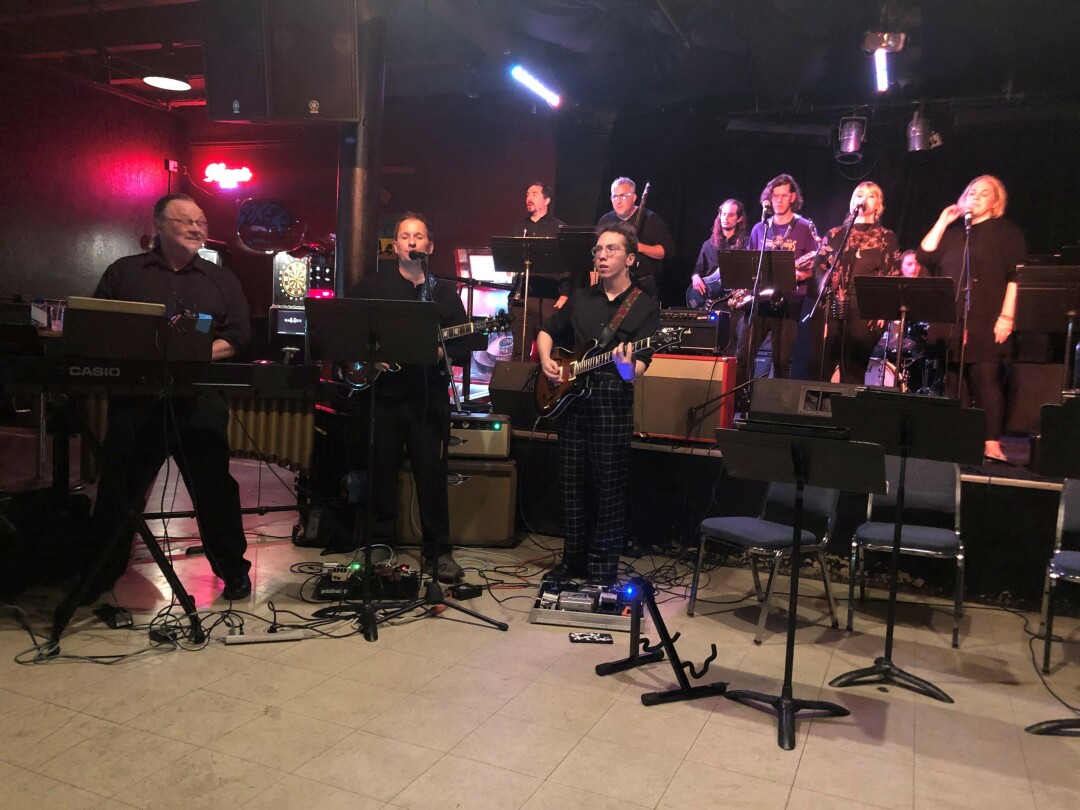 The UW-Superior Jazz Ensemble playing at The Rex. Photo by Jill Fisher.

The duo Chris Hollister (AKA Prank Williams) and Tony Petersen (AKA Ditchbird), both currently based in Minneapolis, began its Wednesday evening residency at Cedar Lounge in Superior on Oct. 5 with a rambunctious performance I was happy to witness.

Tony Petersen (guitar, banjo, harmonica and vocals) is a Cloquet native who performs as Ditchbird. Chris Hollister (guitar, banjo, bass drum and vocals) also plays in the band Social Animals. The two teamed up for this gig with keyboardist Ben Cosgrove.

Cosgrove travels around the U.S. fusing his interest in wild and urban landscapes with music and will join them for just a handful of gigs before heading south to Kansas and Tennessee, and then back to his old stomping grounds in the Northeast.

This trio was an appropriate follow up to Woodblind’s September residency. Both groups provide high energy entertainment, playing both covers and originals.

With Hollister and Petersen, the vibe comes close to speed bluegrass, such as in their rendition of the Irish tune, “Wild Rover.” Other covers approach that as well, for example Paul Simon’s “Sounds of Silence” and John Denver’s “Country Roads.” Hollister kept the beat going with his bass drum, which at times came on a bit too strong.

The range of songs was expansive. They paired “Sex Is On Fire” by Kings of Leon with “I’m on Fire” by Bruce Springsteen. Other covers included oldies like Marshall Tucker Band’s 1973 “Can’t You See” and The Who’s 1971 “Baba O’Reily.” Then there were more recent tunes like the 1999 “All Star” by Smash Mouth.

But covers weren’t the only tunes presented; the group also performed several original songs – “Hurricane, Utah” written by Hollister, “You Freak Me Out Sometimes” and “New Routine” by Petersen and “Stairs Lead Down,” on which the two collaborated.

As Prank Williams’ online information warns, one may become a part of the show, which was the case this evening when they insisted a bartender come up on stage to sing and play the tambourine during one number. The tambourine was then passed onto another lady who really got into it. What a hoot!

I found it interesting that no Hank Williams songs were performed that evening, since I assumed Hollister’s moniker suggested he covers that artist. Just one of his pranks.

Both Petersen and Hollister have released CDs of their original songs in the last year. I already owned the 2021 Real Enough For You Now by Ditchbird/Peterson (on which Ben Cosgrove played several tracks), and so gave it another listen. These songs are mostly ballads of personal longings.

By contrast, a second 5-track CD, Some Dreams, was released the same year and was in line with his Wednesday performance. The song “Heads Up” starts out as a slow ballad, then breaks into a fast-rockin’ number suggesting where Petersen is headed musically.

Namaste, Cowboy is the title of Prank Williams’ CD released on May 26 of this year. The sound is very similar to his live performance. Two of his original tunes were quite memorable: “High Water” and “The Heart’s a Hard Habit to Break.” I will enjoy listening to this one again.

Look for Prank Williams and Ditchbird, sans Cosgrove, to be back at Cedar on Oct. 19 and 26 and get ready for a wild and fun time.

I want to note the remarkable performance by the UWS Jazz Ensemble at the Rex in Fitger’s on Thursday evening, Oct. 6.

The gig, “Jazz Meets Rock,” was a mashup of the Jazz Ensemble with the Duluth Transit Authority and Show Biz Kids, all under the direction of Dr. Greg Kehl Moore. They were really swinging, very danceable.
I must give a shout out to Ian Hopp, who wailed on the drums in the two latter groups.

According to Moore, this show has been an annual gig that was on a forced COVID hiatus the past two years. I intend to keep this event on my radar for next year!