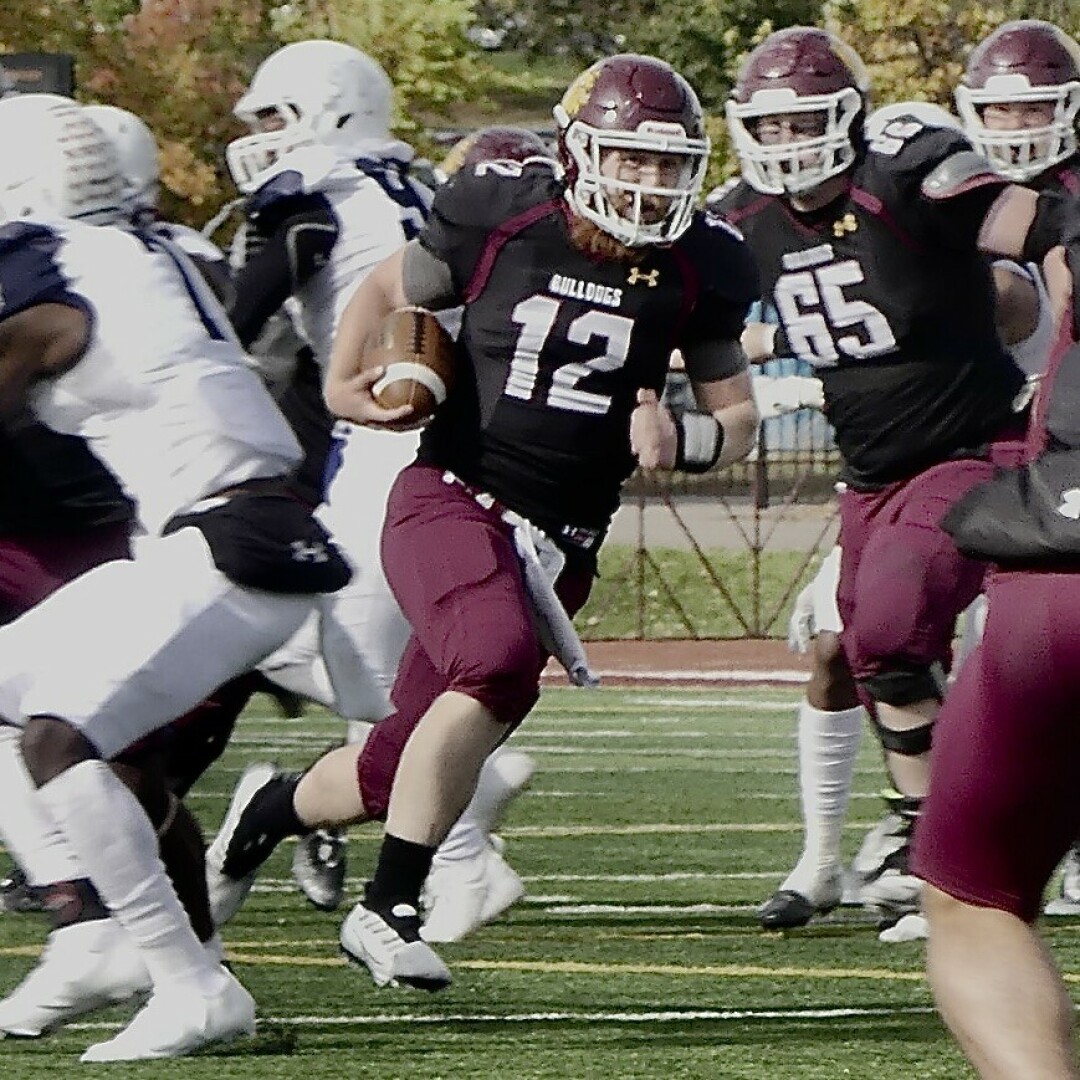 Freshman Kyle Walljasper proved he’s a “run first” quarterback, cutting back through traffic for a 51-yard dash to his fourth touchdown in the 49-14 romp over Mary. Photo by John Gilbert.

This is the week when hockey takes a serious six-month hold on Minnesota sports fans, when we get to enjoy the start of the Minnesota Wild’s NHL season, and the state’s outstanding college hockey programs shift into high gear.

For the UMD men and women, both ranked No. 4 in their respective national polls, the season already is old enough for bye weeks. In fact, the hockey, football and volleyball teams are all on the road this week.
The men just had their bye week and this week will head for Minnesota State Mankato for a series with serious post-season Pairwise overtones. The Mavericks lost 5-1 at Minnesota last weekend, but then beat the Gophers in the rematch at Mankato when Ryan Sandelin scored the winning in a 3-2 game.
That split could cost the Gophers when playoff seeding takes place, although the Twin Cities publicity machine already is having an impact: After splitting, the Gophers rose to No. 2 in the USCHO ratings, behind only Denver.

Another split or two and Minnesota might become No. 1.

Without question, the Gophers have a strong array of high-profile talent, just like every year, but they have had a terrible time exerting anything near dominance within their home state.

Not only does Mankato give them grief, eliminating them from the last two NCAA tournaments. In addition, ever since the Big Ten schools broke away to start their own hockey conference, both St. Cloud State and UMD have beaten Minnesota consistently. So consistently, it seems, that it may have led to a coincidence, that for the first time in UMD’s Division 1 hockey history, the Bulldogs will not face Minnesota.

“Don’t blame me,” said UMD coach Scott Sandelin, noting that all of his suggested dates were turned down by previous commitments at the other end.

In the Twin Cities, the totally prejudiced media continues to boast that the Big Ten is the strongest hockey conference, a claim that facts, of course, don’t support.

Minnesota and Michigan have been strong, but no Big Ten team has won an NCAA title since they formed, and they continue to reside deeply in the shadows of the NCHC. That has led to the phrase that the Gophers are “first in the Big Ten, first in publicity and fighting for third in the state of Minnesota.”

The UMD women have a bye this week before getting into the challenging part of their season. Beating MSU-Mankato last weekend was a show of territorial dominance, but heavily outshooting the Mavericks both nights was rewarded only when superstar defenseman Ashton Bell broke down the ice with the overtime faceoff, outflanked one defenseman in the 3-on-3 sudden-death session, then cut back inside a second defenders before getting to the goal unchecked and crossing in front to score at 0:14.

That 2-1 nail-biter was followed by a second close battle that UMD won 2-0.
After the bye, the Bulldogs will face, in order, Ohio State, Wisconsin and Minnesota – the three teams rated ahead of UMD in the WCHA.

As it is, UMD is a solid fourth behind those three, but is impatient to move up into title contention with them.

In both football and volleyball, UMD’s teams are strongly in title contention.

In volleyball, UMD swept both Winona State and Upper Iowa last weekend at Romano Gym, and this week they hit the road for a big match at MSU Mankato Friday, and an enormous challenge at Concordia of St. Paul on Saturday. That 5 pm game makes for an enticing doubleheader for any UMD fans heading for the Twin Cities this weekend, because the UMD football team, which hit high gear against the Mary Marauders last Saturday, play at Concordia in an NSIC game at noon.

They pride themselves on team balance, and it was never more evident than when middle blockers Samantha Paulsen and Grace Daak took turns using their 6-foot-3 size to not only block effectively but deliver some key kills to the offense.

No Bulldog got to double figures in kills against Upper Iowa, but everybody contributed, and Paulsen was named player of the game.

In football, coach Curt Wiese has stressed to his team that just because they get a lead doesn’t mean they can let up, a tendency that has allowed opponents to make late runs at the Bulldogs.
Finally, against the University of Mary, everybody was healthy and the Bulldogs did both – build an early lead and keep their foot on the gas.

On offense, Wiese likes to send in 230-pound freshman Kyle Walljasper for spot use at quarterback when a running play is called for.

Garrett Olson made his return at quarterback from an injury, as did wide receiver Armani Carmickle. Olson played well, even catching a trick-play touchdown pass from Noah Skifton, but Walljasper stole the show.

The rugged Walljasper came off the bench to score four touchdowns, and the fourth one was one for the highlight video. He started off as if on a right end sweep, then cut in to cross the line of scrimmage, then he cut left, right toward the midfield congestion, but he dashed through defenders and veered left, getting through and around the last Marauders, charging up the left sideline for a 51-yard scoring run that ended when he was tackled at the goal line and went down, possibly from exhaustion.

Olson was 16-23 for 250 yards, and while he might have been forcing passes to help Carmickle find his rhythm, the dangerous wide receiver caught four of the eight passes that came his way for 77 yards.
Just as important as the offensive show was the Bulldogs’ defense, which sacked starting quarterback three times and backup Logan Nelson four times, while Tim Pokornowski, Rayshion Brumfield and

Dayvia Gbor all grabbed interceptions as the Bulldogs dominated from start to finish.

Wade Sullivan’s touchdown was the only score of the first quarter, but then the Bulldogs added 14 in the second, 7 in the third and 21 points in the fourth quarter.

“We never let up today,” said Gbor, a senior from Brooklyn Center. “I think this team was almost identical to Moorhead, which we let come back on us at the end last game. So today, we decided to show these guys a full four quarters of Bulldog Football.”