Expedition is a great way to go on expedition 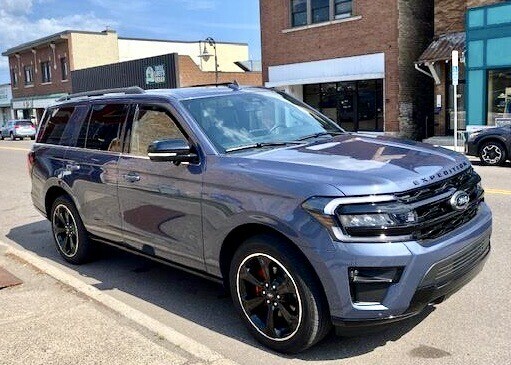 Bill and Lorraine are the kind of people you’d love to have as neighbors. They moved in with their three young kids across the street from where Joan and I were raising two young boys, several decades ago, when we lived in Shoreview, Minn., and I wrote for the Minneapolis Tribune.

We hit it off immediately, and so did our kids, playing all sorts of sports in the yard and intertwining our lives almost totally.

We got so comfortable with each other that when I would drive home and park in our driveway, I was never sure I should go into our house or theirs, and it was virtually certain the whole gang would be in one place or the other.

Bill changed jobs and they move to Montevideo, and then to Missouri, and Joan and I moved to Duluth. Made it hard to keep getting together, and we pretty much lost contact.

But we reconnected a month ago, and Bill and Lorraine were driving to Minnesota for a visit and planned to come to Duluth to see the sights and reconnect. When you have good friends that are THAT good, you may lose touch but you don’t lose the relationship.

We intended to drive them around, up the North Shore and all over, and we had the perfect test-drive vehicle in which to do it – a 2022 Ford Expedition Limited 4x4, which may not be the biggest SUV in creation, but it’s among ‘em. It will hold seven occupants somewhere among its three rows of seats, and the only reason it won’t hold eight is that the second row is two buckets just like the first row, and if you got a bench or split-back second row you could add a passenger.

Not that there’s many good reasons to have a full house on a road trip, but with kids and soccer or hockey player shuttles, you never know.

Our first mini-trip was to the Rustic Inn, up the North Shore to Castle Danger, so we could share with them the benefits of our favorite restaurant, and its spectacular array of fruit pies and carrot cake.
It was a dark, grey afternoon, so when we ventured farther north we only went as far as Iona’s Beach, a unique stretch along a cove where instead of sand the “beach” is all small to middle-sized stones. Even in the gathering darkness, that was a spectacle for all of us.

On a second venture, we made it to Grand Marais to show off one of our favorite North Shore destinations, an arts small town sitting calmly on One Particular Harbor, as Jimmy Buffett might say.
Of course, that time we took the North Shore Drive route to Two Harbors so we could hit the Great! Lakes Candy Kitchen in Knife River and obtain several varied homemade treats, including my favorite stash material, the dark chocolate almond clusters with tiny bits of toffee mixed in.

We also pulled off Hwy. 61 to use the Expedition’s mountain-goat capabilities and climb the narrow one-lane entryway to Palisade Head, the remarkable bluff that sits high above Lake Superior on what is an enormous cliff that could be treacherous rock country to climb on, unless you’re both careful and agile.

As we made our way on to Grand Marais, we played some tunes off my iPhone through the MPR function and the superb audio system, when we ventured away from the satellite radio.

But mostly we caught up on conversation, which was easily done because the Expedition is vault-quiet and solid on the road, and also in being secure from road noises.

On the way back, we tuned in a Twins broadcast on satellite, and we pulled off the road a couple times to shoot photos of the sunset we were driving into, and its effects on the cloud formations over the big lake.
There is a trend these days to paint cars and SUVs a flat grey color, but this Expedition was different – an almost-flat blue, called, with amazing understatement, “blue-tinted clearcoat.” It was a unique color, and it perfectly set off the Limited model’s black trim items, such as the grille, the alloy wheels, and the black lettering that says “Expedition” stretching full width on the tailgate.

Inside, the stitching is perfectly done on the dashboard and the smooth-leather bucket seats, and the dashboard outlines an enormous 15.5-inch information screen that is bigger than your basic iPad.
In fact, it might be too big, because when you can put all sorts of information on a screen, then you might as well add a few more items.

Some of the switch work is similar to what’s inside the new Lincoln Navigator, which I recently reviewed.

On the console, there is a rotating round knob for engaging and shifting gears, and that is easy to get used to, while leaving a lot of space for other controls. A mode switch lets you switch from eco to normal to sport.

One item made me nervous, however. The push-button starter is on the lower dash, down ahead of your right knee, but right next to it – too close, in my opinion – there is another round push-button thingie that allows you to control your trailer when you’re hauling a trailer.

Why you would need a trailer is another topic. With all that interior room, you still get a decent sized storage area behind the third-row seats, and if you need trailer-sized space, it is almost immediately gained by folding the second and third seats down into a vast flat surface. To do that, you push another button and another electric motor lowers or raises the seatback.

Naturally, all the contemporary safety gadgets are in place, such as forward collision alert, and various features to keep you going straight ahead.

An enormous sunroof covers almost the entire roof, complete with sunshade, and acoustic glass with active noise control, and the vehicle is a 4G hotspot.

Those items all add to the sticker price, and a reasonable base price of $67,345 can quickly rise to the $81,305 as-tested price for our vehicle.

Standard is the 3.5-liter EcoBoost V6 engine, a turbocharged unit that runs through a 10-speed automatic. That’s the same drivetrain used in the loaded F150 pickup.

In the Expedition, it delivers 440 horsepower and a whopping 510 foot-pounds of torque.
In our driving all over the Duluth area, we averaged 18.3 miles per gallon.

We had a couple of other vehicles we might have used to take Bill and Lorraine on the numerous sightseeing places we had in mind. But with the new Expedition parked in our driveway for the week, why would we consider any alternative?