Stories buzzing in a wasp’s nest 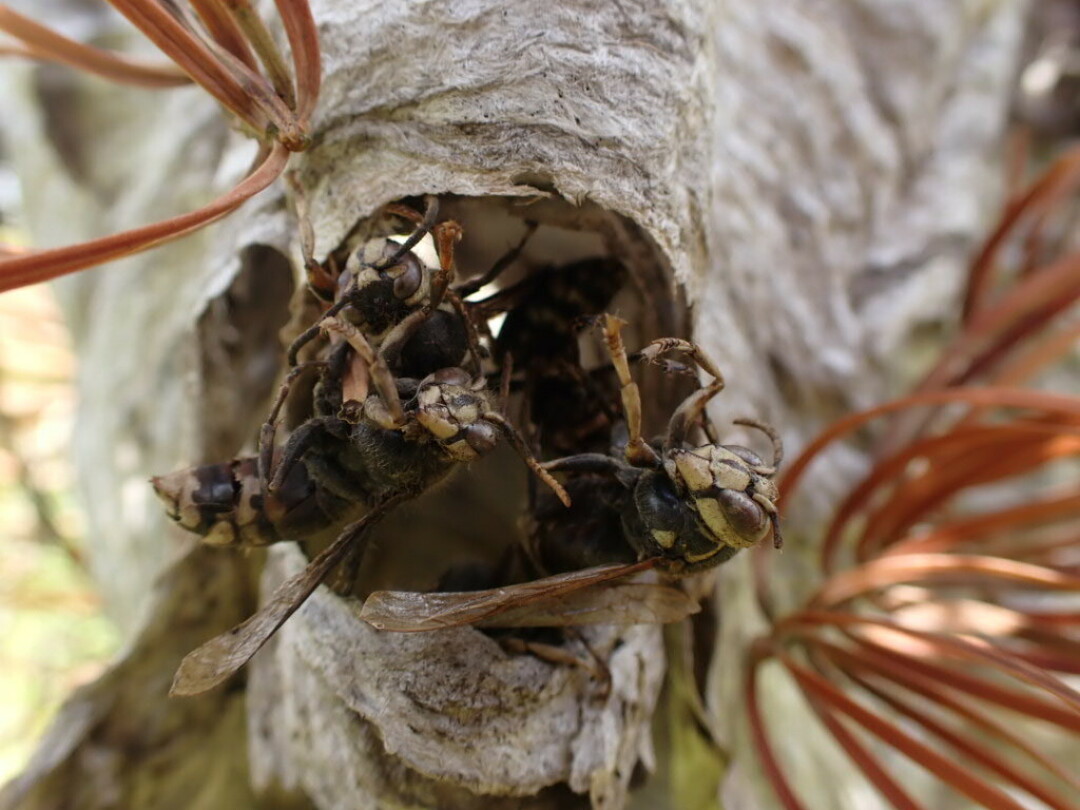 A colorful crew of Master Naturalists in my “Finding the Stories in Nature” workshop trickled out of the picnic shelter at Fox River Park near Waukesha, Wis., and regathered next to a spruce tree on the lawn.
“Here’s your first challenge,” I told them. “What stories do you see?”

A few students came closer and poked at the papery gray remains of a bald-faced hornet nest in the tree. They observed the torn bottom of the once-oval shell, and the way the spruce needles poked up through the paper where the nest encompassed the twig.

Someone pointed a tentative toe at the circle of dead brown grass directly below the nest, and reached out as if to touch the paper disc of honeycomb that had come to rest on a lower branch.

“Well,” one student began tentatively, “someone sprayed it.”

I nodded encouragingly, watching their gears turn, and then jumped in to share the ideas that had been churning in my own head.

Someone noticed the nest – too close to the picnic shelter – or maybe a visitor complained about a wasp attracted to their sugary drink. (Bald-faced hornets are technically wasps, not true hornets.)
Worried about severe allergies, or even just some painful stings, someone decided that the risk was too great, and the nest couldn’t stay.

A park maintenance person took a can of insecticide off the shelf and drove over in their truck to take care of the problem. It looks like they sprayed, and then tore open the bottom of the nest, and then sprayed some more. The surrounding spruce needles turned brown. The grass turned brown.

And all that remains of the dozens of bald-faced hornets in the colony are two mummified bodies caught in the act of crawling toward the exit.

“I also see a story of life,” I continued.

Last fall, at about this time, a new queen emerged from her colony, found a drone from another colony, and mated. The male drone died, while the new queen burrowed into the soft wood of a rotten log and hunkered down for the winter.

Glycerol in her cells kept the sharp crystals of ice at bay.

Last spring, the queen emerged and began to build her colony. With strong jaws, she scraped up soft fibers of rotting wood, mixed them with her own saliva, and formed them into a small disk of honeycomb-shaped cells and an outer shell of paper. (This outer shell makes it easy to tell her nest from that of a paper wasp. Their nests leave the hexagonal cells exposed.)

Our bald-faced hornet queen laid her first set of eggs (fertilized with the help of that short-lived drone last fall), then fed her larvae chewed up caterpillars until they were ready to pupate.
Twenty-five days after the eggs were laid, the queen finally had subjects to command. She retired to the nest to continue laying eggs while her daughters ventured out to hunt caterpillars and gather paper-making supplies.

As the colony grew, they enlarged the nest by transferring material from the inside to the outside.
“I also see a story about risk and reward,” I add.

Autumn is when wasps become gamblers. If the queen is too quick in laying the unfertilized eggs that will become male drones, and initiates the formation of new queens too soon, the colony may not reproduce to its fullest capacity. Maybe the colony could have gotten just a little bigger and made just a few more new queens to carry on their genes.

On the other hand, if the queen waits too long, hard frost may kill the whole colony before the new queens can mate and burrow safely into a hibernaculum. The new queens are their hope for the future – the old queen, the drones and the rest of the colony – are doomed to frost no matter what.

“What other stories do you see?” I posed again to the group, and we returned to talking about fear.
One after another, members of the group shared their personal stories of being stung, being chased and being scared.

Aggression is part of the insect’s story. At any given time, bald-faced hornets have dozens of tender, energy-rich eggs, larvae and pupae squirreled away in their nest.

The colony also contains a significant number of workers whose job goes beyond providing food and shelter to protecting the nest from hungry bears, foraging skunks and scared humans.

More than 99% of wasp species are solitary, with a single female laying eggs and provisioning the larvae all by herself. Those species are rarely aggressive.
Finally, an artist in the group peered closer and admired the shades of gray layered in subtle stripes and swirls.

Red-eyed vireos like this material, too, and often incorporate scraps of wasp paper into their own nests, a type of tricky camouflage meant to deter potential nest predators.
From death, to life, to other lives, this nest had tales to tell.

“Good work,” I told the Master Naturalists as I motioned toward the woods. “Now let’s go find some more stories!”