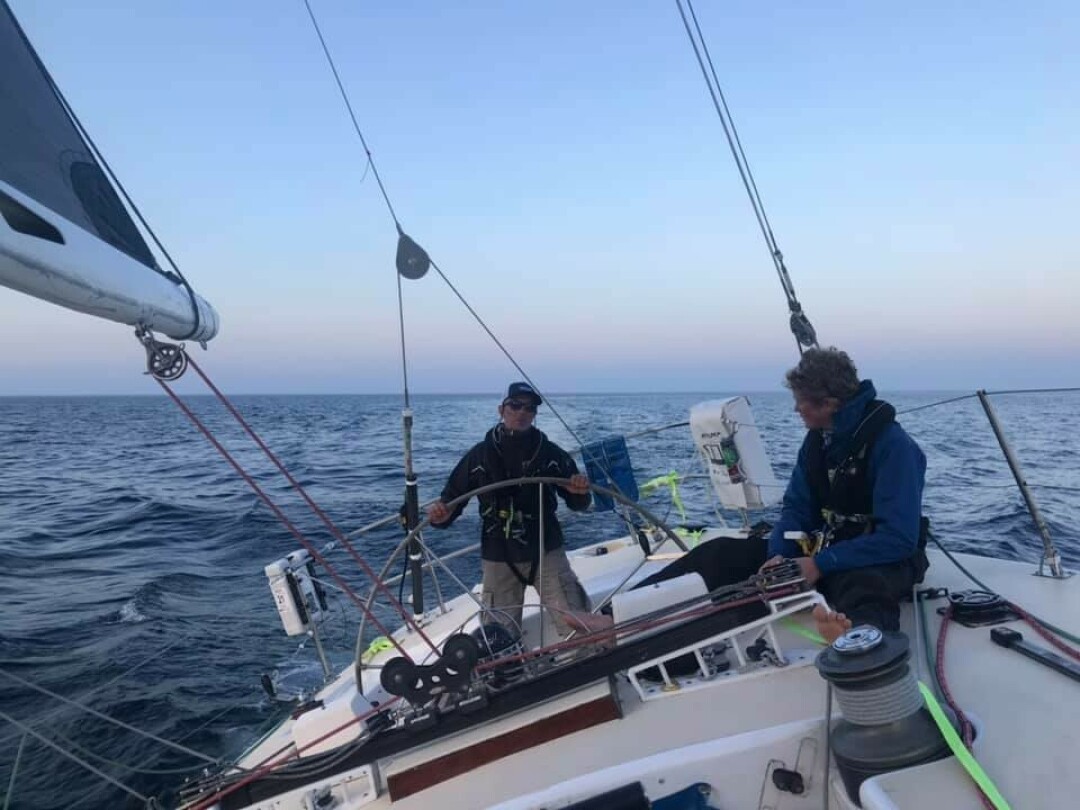 Sailing Chef Robert Giuliani steers during one of his adventures.

Whether it be waves near the treacherous Cape Horn, light waves or sound waves from a fog horn, colliding waves can interfere constructively or destructively. This means different sets of waves can cancel each other or add together to form some super wave striking fear into the heart of the most seasoned sailor.

In life, however, it is nice when our various endeavors add together in a positive way to further our larger goals instead of our projects just pulling us in a hundred different directions.

Robert Giuliani has found a way to successfully use his chef training, sailing, extensive travels, international connections and social media activities to create a tidal wave of support for his soon-to-open authentically-Mexican “Tacos Tacos Tacos” restaurants.

Though the Duluth location’s opening on Superior Street has been delayed, he has been operating the business through a food truck and has many openings planned.

He believes his St. Paul location will be opening in a couple of weeks, though he has learned not to commit to a specific timeline.

With social media and the food truck he has already generated a big fan club for the new taquerias. He even won a Star Tribune award for #1 taco in the state.

“I get so many calls or emails everyday asking when we are going to open,” Robert said.

Robert’s first step toward Tacos Tacos Tacos was to learn a great skill that is in great demand. About 20 years ago he was trained at the Culinary Institute of America. A trained and experienced chef is kind of like a magician to us mere mortals and probably has no problem getting a job, even if the person could end up switching companies a lot.

Social media was a big part of Robert popularizing his new restaurant. His main presence is at _Travelingwithachef_ on Instagram. While anybody can start a blog or vlog, your chances of internet success increase if you have something interesting to blog or vlog about.

While being a chef is great even without social media, social media can act as a kind of force multiplier and build constructively on previous efforts.

An example of an existing business working well with social media might be a real estate agent doing YouTube videos about their local area, including its conditions and the history. Even if the YouTube channel doesn’t really bring new business, it might be a fun way for the agent to add some excitement while researching some useful information.

While recent adventures have helped Robert’s internet presence grow and create his taco following, he had been going on adventures a long time. Many times in the past Robert has been hired to be the chef during sailing cruises and competitions, including Atlantic crossings.

During most if not all these journeys Robert still helps man the sails and so forth in addition to his cooking duties. He is usually paid well and gets to combine two great interests/talents and make the cruises more enjoyable for everyone.

They say that behind every great taco is a great adventure. Well, OK, nobody actually says this, but Robert recently went on what we can call “the Great Taco Trek” in Mexico. Being half Italian and half Mexican, he is fortunate to have lots of family in Mexico.

Having family in Mexico makes it easier to visit for extended periods of time. Around the time of the height of COVID he was in Mexico visiting hundreds of taco stands, researching for his upcoming restaurant.

“It was a good fit down there because there was social distancing outside,” Robert said. “They were fast. You should never have to wait more than four minutes for your tacos.”

After spending lots of time learning from Mexican taquerias and eating about 1,000 tacos, he came back, inspired to begin his taco operations.

Besides making the food authentic he is also paying attention to the atmosphere at his taqueria.

“I really want to make it authentic, so I am bringing in artwork from an artist in Mexico. The lighting is coming from San Miguel,” said Robert.