The NHL season has arrived! 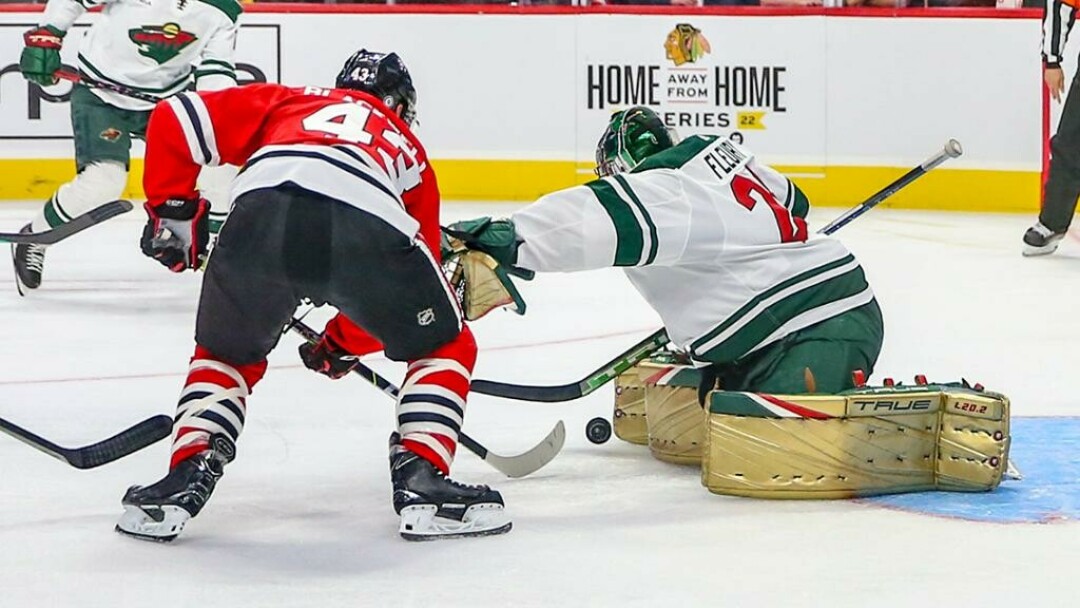 Marc Andre' Fleury makes one of 12 saves for a 3-0 shutout against CHI.

ESKO – When this edition of the World Wide Duluth Reader hits the newsstands across the northland, we will be a few short days away from another NHL regular season opener.

On Tuesday the 11th there will be an East-West coast doubleheader when the NY Rangers meet the Tampa Bay Lightning, and then for the nightcap, the Vegas Golden Knights will meet up with the LA Kings.

The following night there will be six tilts, with the biggest one of these being the annual season-opening game between the Toronto Maple Leafs and the Montreal Canadiens. This season that game will be at the Bell Centre in Montreal. I like that, but have to admit that when this particular game is played in Toronto, it is a wonder to behold.

The reason for that is when the Leafs host the league opener, the game is always preceded by the 48th Highlanders of Canada Pipe and Drums Corps. You may like bagpipes and drums, or you may not, but make no mistake, when they come into an arena or auditorium and begin to play, the hair on your arms and the back of your neck will stand up. Their playing can be that powerful.

If you have an appreciation for some of the beautiful things in this world, you would be amazed by this group. Their music can evoke deep emotion.

Hockey can be quite emotional too. Even being nine days out, I can already feel that something big is right around the corner, something that many fans have waited the entire off-season for. It is a time for renewal and every club starts at 0-0. It’s a fresh start for all.

Having said that, what does the brand new 2022-23 season have in store for the Minnesota WILD?

That is a big question, and not all of the answers are very clear at this time. While the coaching staff returns intact, the roster does not. And therein lies the challenges this team will face at the start of the season.

The club is well into the preseason and has gone 4-0 playing against their opposition’s rookies and prospects. The WILD is in the same boat and is giving several players a strong look to decide who the 20 players will be on opening night, and who the other three will be to fill out their 23-man roster.

The two key roster losses the team has had to deal with are the losses of forward Kevin Fiala and goaltender Cam Talbot.

With Fiala’s departure, the team has to replace 85 points. (33G/52A) With the netminding pair of Talbot and Marc Andre’ Fleury, the club had one of the better tandems in the entire league.

But when Fleury resigned with the WILD, Talbot decided he wanted out. He had already appointed himself the #1 at the position and wouldn’t accept sharing the net with the Flower. Now, an aging Fleury and the young Filip Gustavsson are the likely pair and honestly, they won’t match up with what a Talbot-Fleury pairing could have given the team.

That’s hockey life I guess. If that pairing could have been a 50-50 split in games played, or close to it,

I’m guessing that it will be more like an 80-20% or 75-25% split depending on how Fleury holds up at the age of 37 and considering how the Goose looks in the games he plays in to spell Fleury. This could turn out to be an intricate challenge in goaltender management.

If it’s any consolation, in seeing Fleury’s first presser upon returning to St. Paul he looked quite fit and strong besides. He did his work in the offseason and then some. But 82 regular season games is a total monster. I have a feeling we will find out if Gustavsson has “game” or not in a hurry.

How do you replace what Fiala brought to the table? The true answer is that you don’t. He was that good last year. He was a big reason the team notched 53 wins last season.

The team is putting a big responsibility on rookie Marco Rossi, and he might have as much talent as Fiala, but lacks his experience. Replacing Fiala might fall on the shoulders of a couple of players, with others stepping it up beyond last season’s performances.

The team finished 53-22-7 last year for 113 points. That was good for second place in the Central Division, 2nd place in the Western Conference and 5th overall in the league. Can this edition of the WILD duplicate or better that?

My jury is out on this. The team was 5th in scoring last year, (305G) 16th in goals against, (249) 18th on the PP, (20.5%) 25th on the PK, (76.1%), and took the 3rd most penalties at 882 PIMs. The three items that could help them maintain last year’s status as one of the top teams – PP, PK and PIMs – are in their control. They have the talent to score more PP goals and kill penalties. And if taking fewer penalties is a cerebral matter, they possess that ability too.

Greenway-Merrill start the season on the IR

Goligoski will be in the 7-spot on D.

Brandon Baddock will go between Iowa and the WILD roster when some “muscle and toughness” are needed.

The team will play in 11 “back-to-back” situations. The club’s bye-week will take place from Jan. 29 through Feb. 4, which is also the date of the NHL All-Star Game to be held in Sunrise, Fla.

The team will not appear in any outdoor games this season, which might be a good thing.

So, what happens with this edition of the WILD? I feel the team will take a minor step back in the standings, but I feel they are still a good choice to make the Stanley Cup playoffs. If they do, can they emerge from the first round without being eliminated? That is a great question.

As far as last season’s first-round exit goes, the STL Blues may have been a poor first-round matchup for the team. I also feel that Coach Dean Evason mismanaged his goalie situation in last year’s tourney.

The WILD were spanked in G1 4-0. But they rebounded for two strong wins in G2 & G3. For G4 in STL, Evason stuck with Fleury, putting him in the unenvious position of playing his 4th game in 7 nights.

Hindsight is always 20-20, but that would have been the optimum time to get Talbot in for a game.

Deano stuck with MAF for G4 & G5, the Wild lost both, and badly at that, and by the time he made the change for G6, the die was cast and the WILD couldn’t recover.

Does this roster have that much juice and can they keep the franchise moving upward? We are about to find out! PEACE