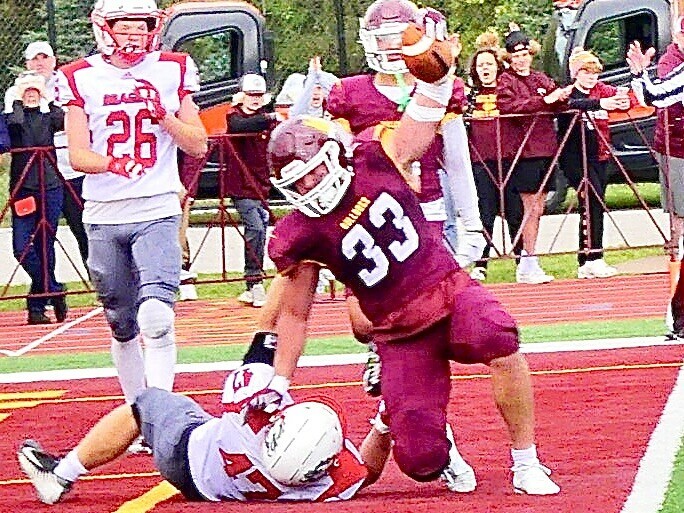 Zach Ojile scores one of his three touchdowns for the Bulldogs. Photo by John Gilbert.

Even the most optimistic Bulldog hockey fans had to wonder how this season might come together, and whether, with nine or 10 new players in the lineup, they deserved their No. 5 preseason ranking.

After one non-conference series, against a strong and aggressive Arizona State outfit, those boosters can relax. The new, young guys looked really good and, in fact, led the Bulldogs to a 3-2 victory in overtime on Friday night, and a more secure 4-1 victory Saturday for the sweep.

Homecoming is a big event in college athletics, and it generally focuses on football. UMD celebrated homecoming by having to hang on against freshman-dominated Minnesota State-Moorhead, who had a career day bringing the Dragons back from a 29-7 deficit in the fourth quarter.

Jack Strand, a 6-foot-5, 220-pound freshman from Bloomer, Wis., was 30-for-40 passing for 340 yards and three touchdowns. He stepped back and threw low-trajectory missiles to four different receivers, including Gage Florence, a freshman from Sawyer, N.D., who caught 16 of those passes for 173 yards, including a 61-yard touchdown pass.

But tradition notwithstanding, homecoming weekend was also when the UMD men’s hockey team opened its season, and if the season opener and homecoming don’t mesh, Bulldogs hockey is still the biggest show in town.

We also have learned to believe coach Scott Sandelin when he says he really likes the skill and character of this group, and is excited to work with them.

Sandelin isn’t equipped to be a slick showman, like P.J. Fleck, the hyper-salesman currently coaching Gophers football. What you see is what you get with Sandelin, who leaves the hyperbole on the shelf and simply molds his players into a contender, year after year.

Zach Stejskal is back for his junior year of eligibility in goal and played the first game, in which the Sun Devils led 1-0 after one period on a power-play goal by former Eden Prairie standout Jack Jensen, and 2-1 in the third when Lucas Dillinger scored at 1:03.

Stejskal made several big saves among his 26 stops, including a couple of breakaways, while the Bulldogs countered with a goal by Dominic James, who one-timed a rink-wide feed from Quinn Olson in the second period for a 1-1 tie, and the first collegiate goal by Isaac Howard at 3:44 of the third to make it 2-2 on the power play.

In 3-on-3 overtime, UMD gained its only lead of the night. Derek Daschke, the former Miami of Ohio defensive stalwart who chose to transfer to UMD for his fifth year, rushed up the ice and fed Tanner Laderoute in the left circle, then, instead of hustling to the goal-mouth, Daschke stopped in the slot and cranked up for a slap shot. Laderoute sent him a perfect return feed, and Daschke’s one-timer beat Sun Devils goalie T.J. Semptimphelter at 1:50.

Sandelin adjusted some of his personnel for Sunday’s Game 2, including sending in senior goaltender Matthew Thiessen, who transferred to UMD after three years at Maine.

Once again, the Bulldogs yielded the game’s first goal, by Demetrios Koumontzis. to open the second period. The Sun Devils goal seemed to snap the Bulldogs into focus, and they responded with three consecutive goals in a 17-shot barrage.

Luke Mylymok ignited the Bulldogs with a goal at 6:08 of the second after Cole Spicer rushed up the middle and dropped the puck to Tanner Laderoute, who relayed it back to Spicer, near the right edge of the goal.

But instead of trying to jam in a shot, Spicer quickly passed across the goal-mouth to Mylymok, who one-timed it from the left circle. Then Ben Steeves, a freshman from Bedford, N.H., took over. On a power play, Steeves raced in, pulled up, and fired a screened shot in from the top of the right circle at 14:23.

Just 57 seconds later, Steeves found himself open behind the Sun Devil defense for a pass from Carter Loney. Showing great poise, Steeves pulled the puck from right to left across the crease, meaning instead of a good scoring chance he had a gimme, tucking in an easy goal for a sudden 3-1 lead.

Defenseman Owen Gallatin secured the final score on a power play, hammering in another slick pass from Loney, who was behind the net at 11:29 of the third.

Steeves said he’s already learned some things about adjusting to college hockey as a 5-foot-8, 165 freshman. “I think being around the net is going to be important to scoring goals,” he said. “And the players are all bigger and stronger than in junior. When you have the puck, other people want it, too.”

UMD’s football victory in their North Division opening match with Moorhead was filled with big plays and surprises – most of them supplied by Dragons quarterback Strand and receiver Florence.

UMD had the game under control at 29-7 in the fourth quarter, but Strand hit Florence for a 61-yard scoring strike, then also passed for two points to trim the deficit to 29-15. Then he connected with Ryan Bieberdorf for a 17-yard touchdown pass, Strand’s third of the game, for two stunning touchdowns in just 53 seconds to cut UMD’s lead to 29-22.

It took a later touchdown pass from Garrett Olson to Zach Ojile to secure the 36-22 victory, which included more oddities. Workhorse Wade Sullivan carried 17 times for 106 yards, but no touchdowns. That became the specialty of Ojile, who ran for two short touchdowns and caught the clinching TD pass to account for three of the Bulldogs five TDs.

MSU Moorhead almost spoiled the party, however, as the speedy Gage Florence raced into the clear for 16 receptions as Strand recorded his astounding 30-40 passing for 340 yards.

When it came down to crunch time, however, UMD’s defense rose up to sack Strand on an unprecedented three consecutive plays near midfield, ending the Dragons final hope to catch up.

This weekend, while the UMD football team stays home to take on Mary at noon, the UMD women’s hockey team comes home after a 4-0 start, to face Minnesota State-Mankato on Friday and Saturday, which conflicts with the return to Romano Gym of the volleyball team, which puts its 15-1 record on the line against Winona State at 6 pm Friday and Upper Iowa at 4 pm Saturday.