Mini Cooper offers refreshing visit to the past 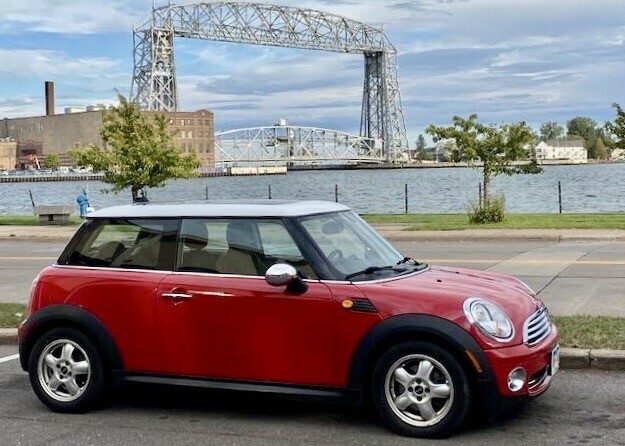 I had the chance to do both for the past couple of weeks, because a thinning supply of available test vehicles out of Chicago has had a temporary interruption, so we were left with our own two cars.
Our trusty Kona gets the heavy work between my wife, Joan, and me, while our faithful 2007 Mini Cooper gets mostly left in our garage.

The Mini had to have some complex work done to locate and fix a short in the wiring, but when we got it, I drove it, and then I insisted on driving it every day because it was flat-out fun to drive.

The car has an identity, a character, that you bond with when you drive it. It’s small, but built around four seated adults. It’s quick, and it delivers 38 miles per gallon around town.

But my main enjoyment in driving it is the CD player. It had a surprisingly great audio system, and the realization hit me that while I love the dozens of CDs I’ve made in years past, almost no new cars have CD players, so those custom-selection CDs have mostly sat idle while I engage the satellite radio in the new test cars.

But climbing aboard, starting it up, and sliding in a disc with Trampled by Turtles, Guy Clark, Trisha Yearwood and on back to  isolated favorites from Ian and Sylvia and early Gordon Lightfoot and Leonard Cohen was nothing short of exhilarating.

A lot of things happened to me in the past week. One week ago, having written my auto review and a sports column, I went to send it by my usual means – dragging and dropping it into an e-mail and sending it in to Jim at the Reader. But this time, my screen wouldn’t give me the proper venue to transmit. In fact, it informed me that my “14-day trial period” had run out for some new deal called Google Workplace, and I would not be able to do anything until I agreed to pay the bill.

Now, I like to keep things simple, and I never subscribed to Google Workplace. It may have popped up in such an annoying manner when I was on deadline a couple weeks earlier that I inadvertently agreed to something I didn’t agree with, and now they were coming after me.

The situation called for crisis mode, but I didn’t panic. I hustled over to TechStars, my favorite and proven computer repair shop on Woodland Avenue, right across from the Mount Royal shops. Anthony popped out like a magician from behind the curtain, and I quickly explained my dilemma. He was in the middle of something else, but he was intrigued enough – and sensed my urgency – to get into my MacBook Pro and start searching with his expert hunches.

The only screens I could summon up lacked any simple and clickable options to send any emails.
He got it figured out to the point I was shown various options for business workspace, and all I wanted was to go back to “consumer primitive” settings so I could send my articles and photos. After several more drop-down screens, he found one that was basic, and free to use, and with a couple astute clicks I was back to my basic settings.

“Try it now,” he said. I grabbed the MacBook Pro and tried it by sending the auto review, my sports item, and attached the photos. They all went right through.

It was with tremendous relief that I left TechStars, and I wondered how and why so many inferior computer-repair shops advertise with such boasts, while this little shop stays understandably busy without any phony ad campaigns.

My other venture came a couple weeks before I reconnected with the Mini. My wife, Joan, drove it to work while I drove the Kona, and she called with the news that the car’s yellow warning light indicated it had a problem, and if it turned red, it was a critical problem.

She parked and shut off the car, and called me. I went up and read the owner’s manual, which gave extensive information about how this little module controls the car’s ignition, transmission and steering, and possibly more.

We had the Mini hauled to Foreign Affairs, on 7th Avenue East and 9th Street in Duluth, my most trusted repair shop, where owner Jeff Hofslund also owns a Mini. His mechanics repaired it and reset everything, but the problem flared up again on the way home, and we took it right back.

Sending to Germany for the entire module took a couple weeks, but after being installed, the Mini worked fine. But after several test-runs, it faltered yet again. One intrepid mechanic tried every hunch he could think of, and found the culprit.

A tiny, thin wire connects all those electronic parts, and after removing the dashboard he traced this slim little white wire throughout its journey and under the hood. He found about a one-inch piece of the wire had spent 15 years rubbing against the antilock-brake housing and had worn through and corroded enough to short-circuit itself irregularly.

I told Jeff that Joan had said we should give the car to them because it probably wasn’t worth as much as the bill. “But,” I added, “then she drove it home.”

He smiled, understanding how the Mini has soul and character, and becomes a lovable member of you family. This time, I drove it home and it happened to me, too.

The car ran so well, with its little BMW-built 1.6-liter 16-valve engine revving up quickly and forcefully, that it rekindled the love affair I had placed on hold a few years ago.

On my next foray, I brought my little case full of personally made CDs, and the little car’s interior brought a renewed level of enjoyment immediately.

As I zipped around to a soccer game here, a high school football game there, the UMD Homecoming football game followed by two season-opening UMD men’s hockey games, the Mini delivered 38.2 miles per gallon.

And hearing so many great songs I had singled out a decade or so ago and never forgot even though I had been neglecting them, just added to the pleasure of driving the Mini.

When I got home, as I shut it off and started to climb out, I noticed the odometer reading was exactly 10,000. It took us 15 years of limited driving to reach 10,000 miles, so the car is still like new, and with Nokian all-season tires still showing considerable tread depth, we’re ready for another winter.

I love all the safety tricks of our Kona, from the all-wheel drive, to the lane-departure warning to lane-centering, and all the other high-tech gadgetry that makes the best modern cars so special.

But it also can be refreshing to go back 15 years and drive a real driver’s car with its soul and character spilling out over the top, and a riveting song playing too loud on the CD player.