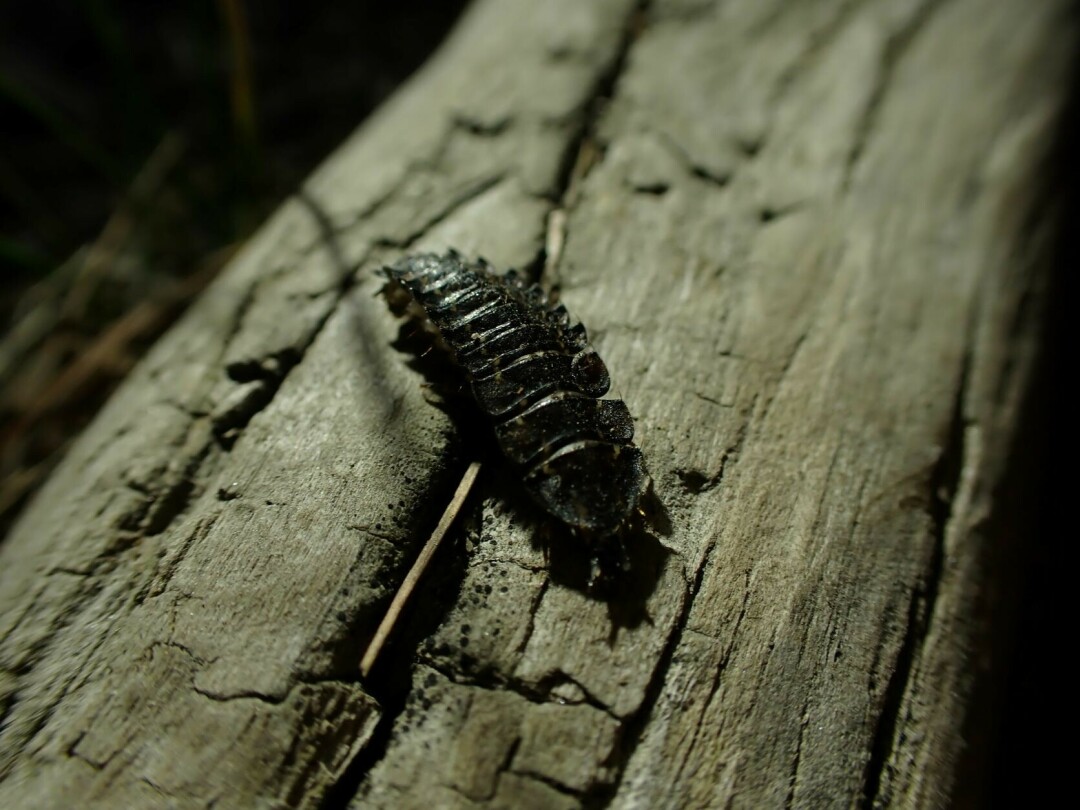 Firefly larvae are fierce predators – and they glow! Photo by Emily Stone

Signs of fall were abundant during my recent trip to the Boundary Waters. As I wrote last week, my cousin and I saw flickers, warblers, loons and geese on migration; and swans eating wild rice.
Another sign of the season was that we had a campfire every night.

Maybe some of you would have nightly campfires during a muggy July trip when the mosquitoes swarm at dusk, it hardly cools off at all and the sun barely dips below the horizon long enough to get some sleep. That’s not me, though. And even when the sun sets earlier and the bugs die down, sometimes I’d prefer to spend a rare, bug-free, warm evening with the far-off fire of the stars.

On this trip, evenings were long enough – and chilly enough – that we had time for both fire gazing and star gazing, and perfectly gooey s’mores every night.

I’d just settled into a comfy spot on a log near the fire, zipped up my down vest and was staring thoughtfully into the shadows when a light outside the fire grate, below the stars and not near the water caught my eye. It was pale and dim, and seemed to be coming from the network of white pine roots that lay exposed in the thin soil across this rocky point.

Suddenly, the fire wasn’t the most exciting light in camp!

I memorized the location of the glow, then dug through my dry bag for my macro camera, and fished a headlamp out of my vest pocket.

The glow pulsed again helpfully, and when I swept the flashlight across the roots, it illuminated a one-inch-long armored vehicle crawling on weathered wood.

The long, oval body was covered by a dozen dark segments of exoskeleton that allowed for limited flexibility when crawling over the curved root, bridging between root and ground, and navigating clusters of pine needles.

When I rolled the critter over, the belly segments were pale, and the six tell-tale legs of an insect poked out from the front half. No wings, though.

Turning off my light, I waited until the soft glow kindled and faded one more time.
The larvae of all fireflies are bioluminescent, and I was eager to see if the iNaturalist database would confirm my hunch. Sure enough, Photuris genus was the only ID suggestion that popped up.

Most of us are lucky enough to be familiar with the twinkling summer lights of adult fireflies – a type of beetle. In a firefly’s light organ, oxygen reacts with luciferin to produce light.

Males blink a species-specific pattern to attract females. If they’re lucky, she responds by flashing back, allowing him to find her hiding spot in the grass. He flies down and they mate.

Many species of fireflies only live for a few weeks as an adult and are so focused on mating they don’t even bother to eat.

Female Photuris fireflies are not so selfless. They have learned to flash the patterns of other firefly species, tricking the unrelated males into thinking they’re going to get lucky. Instead, they get eaten.

This habit has earned Photuris fireflies the nickname “femme fatales.”

Their victims contain toxins in an effort to dissuade predators. In a clever move, female Photuris simply incorporate those toxins into their own bodies, making themselves taste bad to their arch enemies, the jumping spiders.

The children of lightning bugs aren’t any less ferocious. In fact, fireflies who aren’t femme fatales must do ALL their eating in the larval stage – just like the caterpillars of some moth species, but protein instead of plants. Slugs, worms and other insects are all on the menu.

And then, they must find a safe place to escape the clutches of Old Man Winter.

Rotting logs, fallen leaves and damp soil all provide protection from the most bitter cold, enabling firefly larvae to survive the season. Sometimes they must endure more than one winter before growing big enough to pupate in the spring and emerge as an adult.

Mild winters are a boon to the population, as fireflies may persist in greater numbers and emerge earlier in spring, giving them more time to grow and reproduce.

You can help fireflies survive by creating wild corners of your yard filled with rotting wood and leaves. They will be winter habitat for many beneficial native insects and critters.

Being judicious with your outdoor lighting is considerate of many nocturnal neighbors. Using native plants in your landscaping, and NOT using herbicides or pesticides will all increase habitat.

As nights sparkle with frost instead of fireflies, it’s a good time to make sure our yards provide just as good habitat as wilderness campsites for these fanciful and ferocious critters.