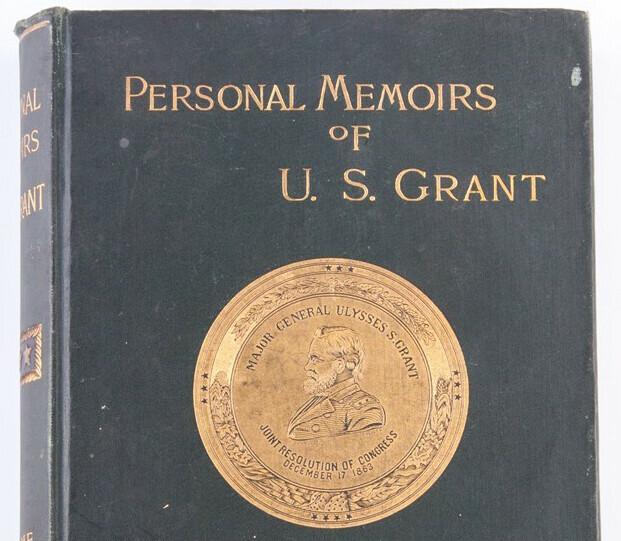 This morning as I struggled to reduce Brazil’s Trump-clone, President Jair Bolsonaro’s annihilation of the Amazon and democracy to 800 words, I rediscovered Ulysses S. Grant.

War hero Grant’s dusty two-volume autobiography was just where it should have been, next to a dozen books dedicated to Abe Lincoln. My Mother gave it to my son Robb 20 years ago.

I was a little jealous then and since Robb was a college student who turned up his nose at my speciality, social studies, I was happy to hold onto the books for “safekeeping.” They were so safe I forgot I had them even though I was desperate to make a copy of the letter my mother had slipped into her gift. It would answer a question about the Robb family’s arrival to America. I have just photocopied it.

Now that my son is almost 40 I think he’s old enough for me to entrust him with the family legacy.

For that legacy I was able to do what my mother couldn’t do for me, bestow the first name “Robb” on my son. Poor Mom had to endure a lot of teasing in Republican Kansas for having named her baby Harry during President Harry Truman’s administration. He was a favorite GOP pin cushion.

That wasn’t the case. I was named after my paternal grandfather.

Here’s most of my Mother’s letter:
“Dear Robb,
“As you are the last Robb in our connection and also a big reader I think you should have the Grant Memoirs. In them you will find the name Thomas Robb. He was your great-great grandfather.
“He was the youngest son of a Scotch Irish family that arrived in the U.S. at the beginning of the Civil War. As their ship was coming into New York Harbor they saw and hailed an outgoing ship for the news. The news was that Fort Sumter had been fired upon.
“…the Robbs were VERY POOR.
However they brought with them from Ireland a tradition of reading out loud when ever a book was at hand. They all loved history. Thomas of course grew up in the civil war.
“When US Grant was dying penniless with nothing to leave for his family. He was approached by Mark Twain who had become something of a publisher. He asked Grant to write his memoirs of the Civil War. In the time he had left Grant did so. They sold massively and Grant left his family well fixed at his death. Many other men wrote memoirs but Grant’s are considered by far the best…

“My Grandfather, poor as he was, sent off for the books so now they are yours…..
“Your grandmother, Georganne Robb Welty”
Having never started the books myself, I thought I should let my eyes pass over a few of the same pages my Great grandfather read to his family. Grant’s prose was every bit as clear as I’d heard.
I tackled his being sent to West Point against his druthers. It was a charming chapter by a humble man with a sense of humor about himself. No wonder he got on so famously with Lincoln.
He wrote that he was close to the worst student of French which, by the way, is an excellent second language for the militarily inclined.
I thought of the letter my Grandfather wrote to his older brother explaining that he got a master’s degree in History because no second language was required. (That might have been a commentary on what American colleges considered real history.) My Grandfather’s confession that didn’t have a head for languages is part of the reason I began studying French five years ago. I’m still at it.

And two related tidbits.
My favorite elementary school teacher, Mrs. Criss, told my fifth grade class that the South’s General Robert E. Lee took care of his soldiers while Grant “butchered” his. Of course, I asked my Grandfather what he thought.
George Seanor Robb was a serious Civil War historian and he was appalled. He told me Grant saved the Union an opinion he shared with Abraham Lincoln. In later years I learned a famous Lee quote that offers a coda to his contest with Grant. “It is well that war is so terrible otherwise we should grow too fond of it.”

And there is this. I took our family on a trip down the Mississippi River to St. Louis twice. Both times we passed through Grant’s old home in Galena, Illinois.
On the second trip our kids were old enough that I wanted to take them through Grant’s home. It was given to General Grant by the grateful citizens of his hometown at the successful conclusion of the war.
As I parked the car across the street Robb announced that he would stay in the car. He didn’t “want to see another dead president’s house.”
I got over that. The book will be better.

Welty also shoots his mouth off at lincolndemocrat.com