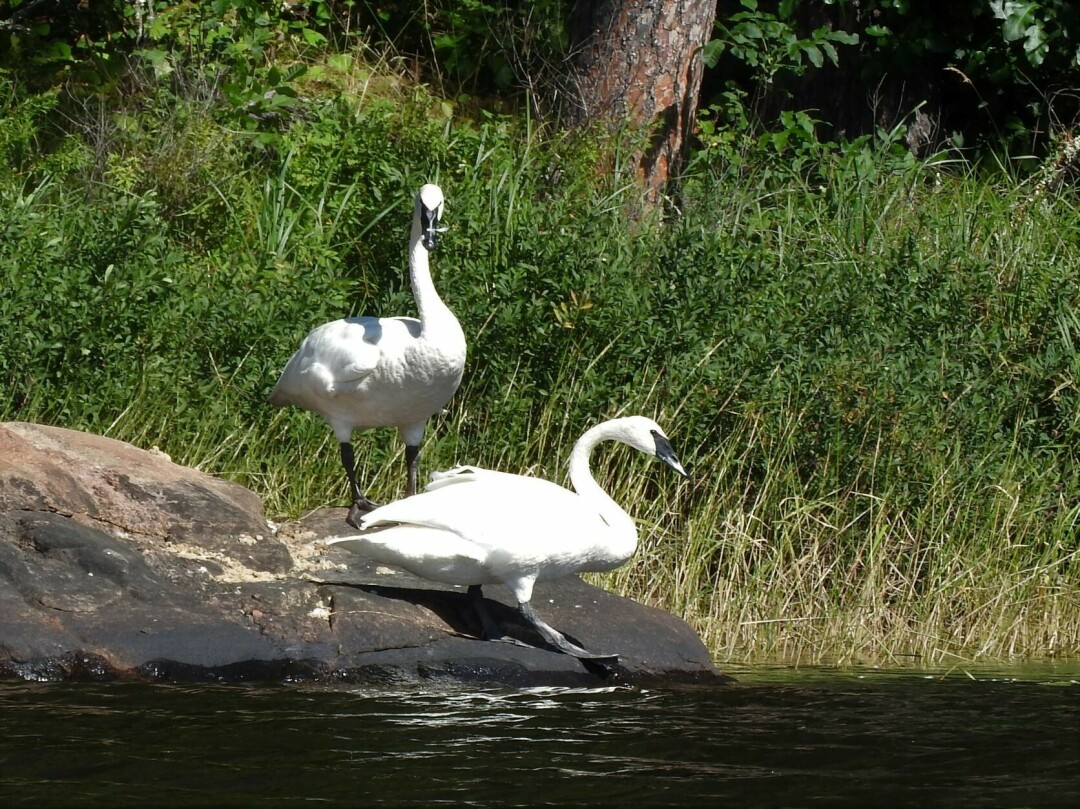 Every year, when the air turns crisp, the dogbane leaves glow lemony from the ditches, and the ash leaves fade to mustard in the swamps, I feel the urge to travel.
I’m not the only one.

Speeding along the highway with a yellow canoe strapped to my car, more shades of gold swirled upward from the roadsides. Yellow-shafted northern flickers are one of our only migratory woodpeckers, and right now they’re heading from Canada to the southern U.S.

While on the ground, flickers’ smooth brown back with black bars and dots blends in well with soil and leaf litter. As they startle, handsome yellow feathers are visible under their wings and tails, and yellow feather shafts show through from above and below. Their white rump patches flash brightly during short, undulating flights.

Flickers catch ants and other insects with their long, sticky tongues, which means they’d better head south before frost kills their food and snow covers their buffet.

My cousin Heather and I flushed up flickers for an hour as we drove west of Ely, Minn., on the Echo Trail. Then we launched my canoe into the Little Indian Sioux River. The channel meandered back and forth in a wide valley, and we meandered with it.

The stream showed almost no sign of flow, except at the portages where we carried our packs on narrow paths beside beautiful, tumbling streams.

As we emerged into Upper Pauness Lake, the water widened but the channel narrowed – cradled by tawny thickets of wild rice. When I daydreamed in the stern and the canoe got off course, our paddles caught the stems and an audible shower of rice grains pattered into the boat.

Finally reaching open water in the main part of the lake, we sized up a pale granite knob that seemed a likely campsite, and puzzled at two smaller white shapes along the shore. The shapes rose, arched graceful necks, and became swans.

Trumpeter swans are traveling now, too. Pairs who nested farther north, as well as the locals, will all feast on the wild rice and prepare to head farther south – to where the lakes don’t freeze.
These – the largest of our native waterfowl – form pair bonds that can last for life, and unlike many smaller birds, they stay together all year long.

Later that evening, as we watched sunset from the granite knob (it was a campsite – the best one on the lake!), the sounds of a trumpeting conflict erupted from the lake next door as two pairs disputed some territory. Splashing came next – the sound of huge, webbed feet down a 100-yard runway, and finally the rush of air through feathers as the displaced pair appeared over the tops of the trees.

Having cleared that obstacle, the swans stopped flapping, arched their wings and glided down toward the dark lake before sending up a line of glittering spray. Silence descended as the moon rose.
The next morning, we portaged past bur oak trees and paddled north in the wide channel of the Little Indian Sioux. The raucous calls of blue jays cut through the calm.

While only 20 percent of blue jays migrate in any given year, that still means as many as 6,000 of them pass through a migration hot spot like Hawk Ridge in Duluth on a busy day.

As we emerged into Loon Lake, the appropriate silhouette was there to greet us. The loon dove and hunted while we paddled by, and white whiskers on their face foretold of more seasonal change. Loons have started their migration toward the Gulf of Mexico, but some will take their sweet time. They can’t molt any flight feathers before they reach the ocean, though. They are already on the edge of not being able to get airborne, and just a few missing feathers could mean the difference between liftoff and iced in.

Our campsite that day was another, even taller granite knob with a commanding westward view of the lake. As we sat around the fire grate eating lunch, activity in the trees caught out attention.

The movements of a flock of small birds blended in with the fluttering of leaves in the breeze. Brief glimpses of drab yellow and olive-green feathers told me these were “confusing fall warblers”; birds without distinctive plumage who I rarely attempt to identify.

The sounds they were making didn’t help either. I can identify plenty of birds by their unique songs meant for attracting a mate and defending a territory, but their sweetly whistled contact calls all sound about the same to my ear.

Except for chickadees. Their namesake call was comfortingly familiar. Chickadees stay local all year round, and migrating warblers are known to seek out chickadee flocks to find food and safety as they pass through unfamiliar territory.

These warblers are headed south for the same reason I go north this time of year: bugs. As the mosquitoes, black flies and other insects who tortured campers all summer prepare to survive the winter in some form of dormancy, the birds who depend on them for food follow their instinct to move out. I, on the other hand, revel in the lack of buzzing in my ears and unmolested hours outside.

On our last morning, a V of geese honked across the pale pink sunrise. We’d spent only four days in the north instead of four months, but still, it was time to pack up and join all of the restless southward travelers on a journey through fall.

Emily Stone is Naturalist/Education Director at the Cable Natural History Museum. Her award-winning second book, Natural Connections: Dreaming of an Elfin Skimmer, is now available to purchase at cablemuseum.org/books and at your local independent bookstore, too.
For more than 50 years, the Cable Natural History Museum has served to connect you to the Northwoods. The Museum is now open with our exciting Growing Up WILD exhibit. Follow us on Facebook, Instagram, YouTube, and cablemuseum.org to see what we are up to.