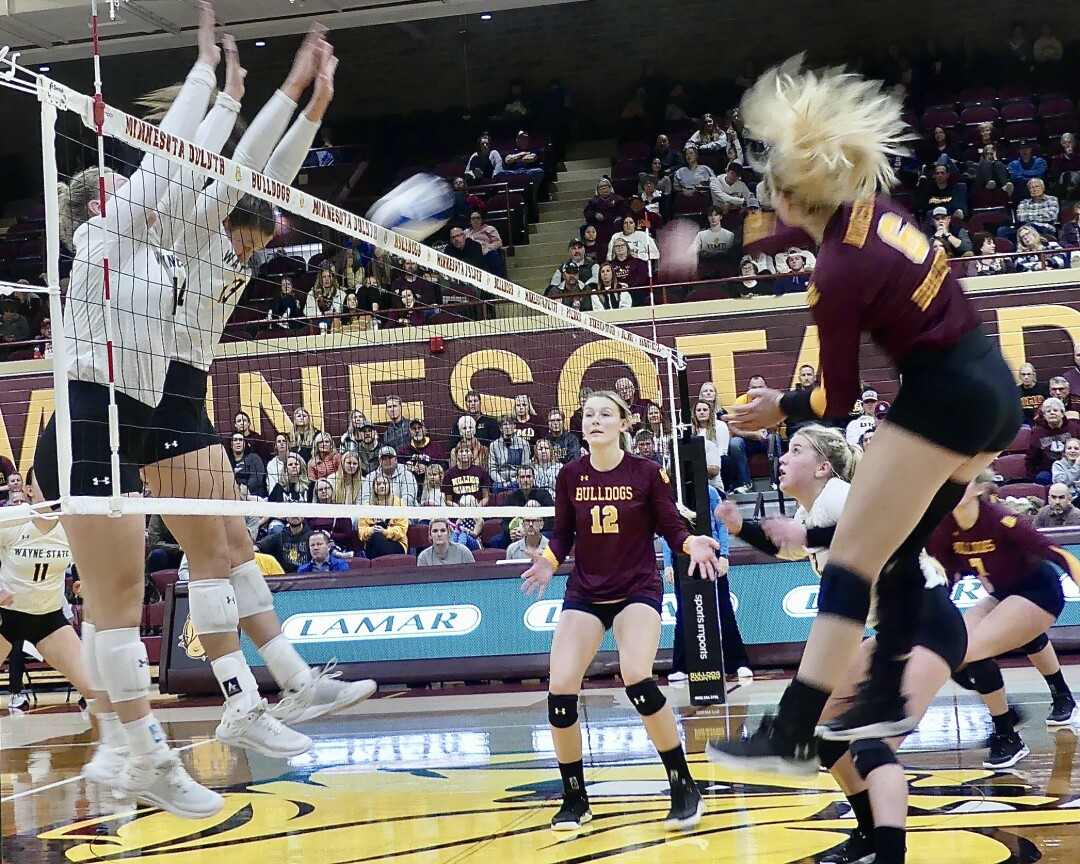 Everywhere you looked, or tuned in, last weekend, there were surprises throughout the sports world, even in our little UpNorth corner of that sports world.

• The Vikings, after looking woeful at Philadelphia the previous week, were outplayed throughout Sunday’s game against Detroit until Kirk Cousins – yes, THAT Kirk Cousins – connected with K.J. Osborn for a 28-yard touchdown pass with 45 seconds left in the fourth quarter to swipe the victory 28-24 from the stunned Lions at U.S. Bank Stadium in Minneapolis.

The Vikings only led once in the game, for the final 45 seconds, after twice trailing by 10.

• The Gophers football team went into East Lansing and whipped Michigan State 34-7 in a game that wasn’t as close as the score indicated. The Spartans didn’t score until only 17 seconds remained and the Gophers had all their points in the bank.

• The UMD volleyball team, riding a 13-0 start to the season, appeared ready to challenge top-ranked Wayne State on Saturday at Romano Gym, but found out how good Wayne State really is by losing 25-20, 25-16, 25-15.

• The UMD football team got starting quarterback Garrett Olson back after missing the last two games, and he threw three touchdown passes against Sioux Falls, the third one boosting UMD to a 31-27 lead with seven minutes left, but the undefeated Cougars came marching back and There Reisdorfer scored his third touchdown of the day with 45 seconds left to give Sioux Falls a 34-31 victory.

The Bulldogs return home for homecoming against Minnesota Moorhead Saturday, knowing that at 2-2, they cannot afford a third loss and retain hope of advancing to the Division 2 playoffs.

• In what was expected to be an offensive shootout, Cloquet traveled to Ordean Stadium and beat Duluth East 14-8, with a rousing defensive effort that limited East star Austan Overdahl to 90 yards on 22 carries.

Always the center of attention when East wins, Overdahll was also the focal point for the Lumberjacks defense, and even though he burst through for the tying touchdown at 8-8 in the second quarter, Cloquet got the winning touchdown in the fourth quarter when Kollin Bonneville carried on a fourth-and-2 at the East 13, and went all the way for a touchdown.

The big question was, what are all these teams doing playing such outstanding games in hockey season?
That’s right. NHL teams are playing exhibition games, and the UMD men will unveil their fifth-ranked 2022-23 edition with a Saturday-Sunday series at AMSOIL Arena against Arizona State in what could be interesting opening tests. UMD coach Scott Sandelin has turned the training camp reins over to Adam Krause, his newly-installed associate head coach, while Sandelin is battling a positive test for COVID-19.

Krause, a former Hermantown standout who was captain of his UMD team, has the responsibility of getting the rebuilt Bulldogs ready to start the season.

The UMD women’s team has already begun play, traveling out to New York last week, where the Bulldogs beat the fledgling program at Long Island University 4-1 (with two empty-net goals) on Saturday, and 5-0 on Sunday, as returning defenseman Ashton Bell scored her first-ever hat trick from the point. Bell missed the last two seasons, joining the centralized Canadian National team, and bringing back to Duluth two World Championships and an Olympic Gold Medal.

Bell will be an integral part of UMD’s hopes for duplicating last season’s surprising run to the NCAA tournament championship game, losing to Ohio State in the final.

The UMD women moved up one spot to No, 4 in the national rankings, but an example of how tough the WCHA is, the league coaches picked the Bulldogs for fourth in the league, behind Ohio State, Minnesota and Wisconsin. The Bulldogs stay in New York all week, then move north to take on St. Lawrence and Penn State before coming home.

The Bulldogs volleyball team will play in Marshall, Minn., against Southwest State on Friday, then continue on to Sioux Falls for a Saturday match.

The Bulldogs had their perfect season interrupted last weekend, after beating Augustana in a 3-0 sweep Friday night, the Bulldogs ran into a near-flawless Wayne State outfit. The 3-0 setback was so convincing, the Bulldogs couldn’t even blame any particular problem for the loss.

As the match went on, it seemed as though the harder the Bulldogs worked, the more distant Wayne State’s advantage became. The Bulldogs couldn’t say they gave the match away, because they didn’t give anything away that the Wildcats hadn’t already taken for themselves.

Wayne State’s blockers prevented any Bulldogs from reaching double figures in kills. They were led by middle blocker Hope Schjenken with 9. Taya Beller led the Wildcats with 14.

Senior Sydney Lanoue was a perfect example for UMD. A consistent, smart player, Lanoue started off OK, but as Wayne State’s blockers started shutting her down at the net, she moved back a bit and then couldn’t find the proper trajectory for her kills, which frequently sailed long.

Lanoue had an uncharacteristic 9 errors – more than the entire Wayne State team, which had only 8, while UMD had 24.

“We weren’t surprised at how good they were,” said coach Jim Boos. “They’d swept Concordia (No. 4) twice and just swept St. Cloud (No. 4) last night. They proved they deserved the No. 1 ranking. They are not going to make any mistakes. We played a pretty good first game, but the momentum switched to them in the second game. We hadn’t faced adversity like this.

“None of our grounded the things we had done so far, and we were fighting ourselves. Now we just have to hit ‘reset,’ and realize we have a really good team but there are some things we’ve got to work on if we want to get as good as they are.”