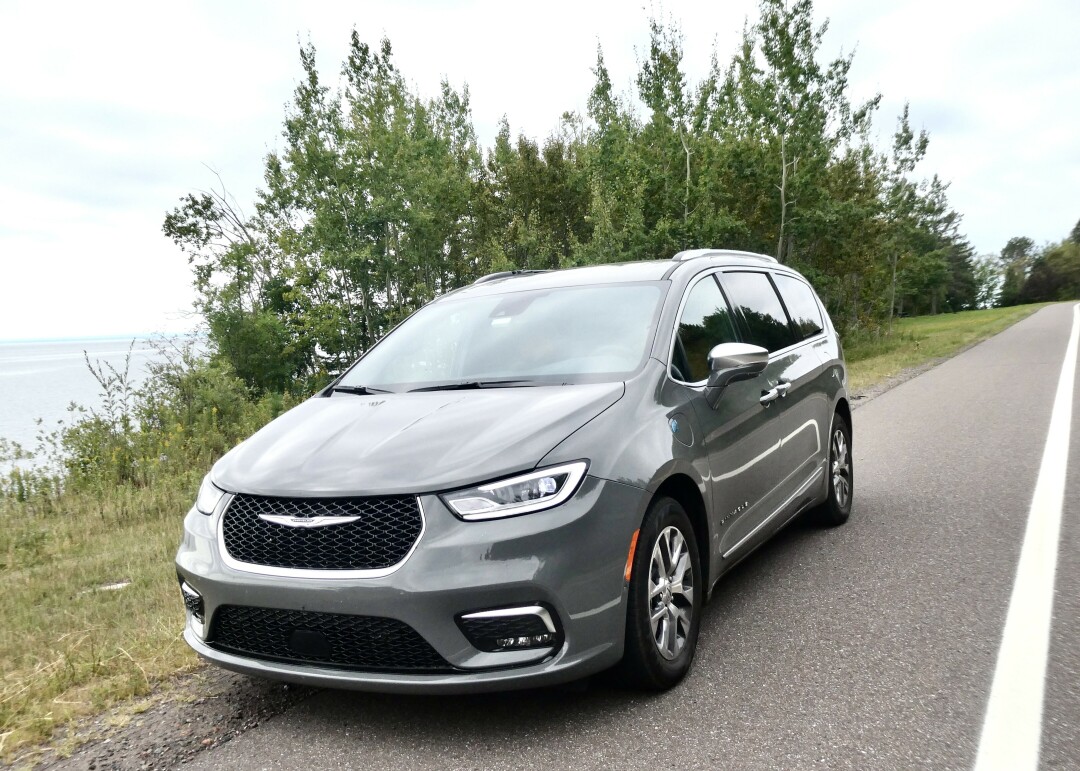 There’s never been a vehicle in American automotive history as versatile, useful, family-friendly and universally scorned as the minivan.

But while U.S. buyers have swung to SUVs, there remains a solid segment that still realizes minivans are the best way to carry families with spaciousness and efficiency.

Exceptional minivans from Honda, Toyota, Kia and Chrysler Corporation – the only remaining competitor in the battle while Ford and General Motors dropped out to play to the SUV craze – making it highly competitive, and each of them seem to rotate to become more luxurious and more feature-filled.

But don’t overlook the manufacturer of the original Dodge Caravan, still called Chrysler but under the Stellanis umbrella these days. As a vehicle that checks all the boxes for size, luxury, versatility and fuel economy that is off the charts, the attractively refined Chrysler Pacifica Pinnacle Hybrid sets a new standard for minivans.

For one thing, detuning the strong 3.6-liter V6 just a bit to coordinate it with a plug-in hybrid battery-powered motor and transmission, puts the power delivery at 260 horsepower, plus 36 more from the electric motor. The result gives the Pacifica a high-potency ability to accelerate and hold any speed on the highways.

The Dodge Caravan was not the first minivan, but it became the icon for a couple of generations in the 1970s, ‘80s and ‘90s. It was so popular it led to the cliche “soccer moms,” because moms of young soccer players would load up all the neighborhood kids and deliver them to their appointed soccer practices and games, almost universally in a Caravan.

We had good friends who were our neighbors in the Twin Cities suburb of Shoreview, and they fit the pattern: Dad drove a car to work and mom drove three kids around to so many school and social commitments they practically wore out a Caravan. It never gave them a problem, and about the time it got to 200,000 miles, their son was old enough to drive and head off to college, so they gave the Caravan to him. He drove it for nearly another 100,000, and it may still be functioning somewhere.

That immense popularity also, however, led to the minivans becoming so common as family haulers they were declared boring by the newest generation, which refused to consider purchasing them. Ironically, in their smugness to bypass minivans for being too corny created sport-utility vehicles (SUVs) – which have become the most trendy and common vehicles in our history.

The timing of my test week with the 2022 Pacifica Pinnacle was perfect, because my younger son, Jeff, had flown home for my birthday, giving my wife, Joan, and me our full house with older son, Jack, already here. But Jeff is a unique character. While all his friends and his older brother had gravitated toward muscle cars and performance machines, Jeff has always loved minivans, even though circumstances prevent him from owning one right now. He likes to haul a bike, hiking and camping gear, or just be free to hop in the back with room to take a nap while on a trip.

So when this beautiful and shapely Pacifica in “ceramic gray” paint showed up for me to test, I made sure we took a family drive from Duluth up the North Shore to Grand Marais. It was great quality time for the four of us, and I made sure to invite Jeff to drive back home.

The seats were rich, caramel-colored leather, heated and ventilated cooled, and if you sat in the second-row buckets you could watch YouTube or videos on your own screen. Or you could recline a bit and gaze at the blue sky through the huge, double-pane sunroof.

There is a third-row bench seat, which folds down if you need more storage space.

The stowaway rear buckets also added to the interior room. Also, there is a cleverly designed cavern behind the third-row seat that provides room for larger items or groceries, and by being sunken, they are out of view to anyone peering inside.

The rotating knob on the console shifts the transmission, and the audio system pipes stunning notes through the 20-speaker Harman Kardon system. Such things as LED headlights, and gray-painted 18-inch alloy wheels add a classiness to the clean style of the exterior. Full power opening and closing  sliding side doors make entry and exit easily done.

Driving the Palisade Pinnacle is sports-car smooth, whether on the freeway or following the twisting curves of Highway 61, tracing the shoreline of Lake Superior. That just adds to the sporty flair of driving a proper luxury minivan and might give you reason to wonder why you needed that SUV after all.

The plug-in hybrid system allows you to get a full battery charge, which allows you to drive up to 30 miles on electric power. If you choose to not bother plugging into your home electrical outlet, you can trust the 3.6 V6 to recharge the battery during deceleration or braking – it’s just that you won’t get the 100 percent battery-fill you can achieve by plugging in overnight.

The difference is significant. If you just drive it like a normal minivan, it will give you 30 miles per gallon even in city driving.

If you have a full battery charge, which supplements any need for more passing power, you can get an astronomical 82 miles per gallon. Not a bad upgrade from normal gasoline power while we look ahead to all-electric minivans.