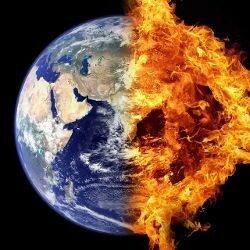 From mansion or hovel, we all
end up dead
We are now living in the Divided States of America, which has been developing for more than 240 years.
Economist Frederic Bastiat has come up with the main reason for the division: “When plunder becomes a way of life for a group of men in a society, over the course of time they create for themselves a legal system that authorizes it and a moral code that glorifies it.”

English poet Thomas Gray caught the same image in his poem “Elegy Written in a Country Churchyard” in 1751.

Today, billionaires and millionaires are plundering Planet Earth and their fellow humans to such an extent we will soon be unable to live on it. Gray experienced plundering by kings and queens in his 18th century lifetime that filled his countryside with graves of the moldering poor. The plundering today is exponentially greater. His poem brings reality to wealth and political power. I’m using just a few lines:

“The boast of heraldry, the pomp of pow’r, and all that beauty, all that wealth e’er gave,
Awaits alike th’ inevitable hour, the paths of glory lead but to the grave.
Perhaps in this neglected spot is laid some heart once pregnant with celestial fire;
Hands, that the rod of empire might have sway’d or waked to ecstasy the living lyre.
But knowledge to their eyes her ample page rich with the spoils of time did ne’er enroll;
Chill penury repress’d their noble rage, and froze the genial current of the soul.
The Epitaph: Here rests his head upon a lap of earth, a youth to fortune and to fame
Unknown.”

In the end of life, there is no warm wealth or cold poverty. Before her death, Queen Elizabeth II had title to 6.6 billion acres of land around the world. Her son Charles III is now the new owner.
Contrary to democratic dreams, the superrich are plundering the poor

At that time, even Thomas Jefferson, the owner of 600 slaves during his lifetime and the father of six slaves by his personal slave Sally, and George Washington, who died owning 125 slaves, agreed with Adams.

It is quite evident that billionaire and multi-millionaire American plunderers of today do not agree with Adams, and some recently met with a survival and “safe room and bunker” expert to learn how to protect themselves and their families from the poor and mobs when conditions made living “outside” intolerable.

A couple of them had bought old missile silos to turn into survival bunkers. A few had bought bunkers in surplus nuclear silos prepared by bunker modification companies. Some had bought large properties and citizenship in New Zealand, considered to be a good place to survive. Alaska was second choice to survive an “event.”

An event might be a total environmental collapse, social unrest, nuclear explosion, solar storm, unstoppable virus or malicious computer hack or scam. None of them suggested using their money to stop some of the events.

Their questions concern their own survival: “Which was the greater threat: global warming or biological warfare? How long should one plan to be able to survive without outside help? What do we do about air and water supply? How many armed guards should we employ – with what weapons? (One billionaire had already hired 12 former Navy Seals as guards. He wondered how much he should pay them to protect him from an “event.”) Should we put deadly disciplinary collars on guards in case they rebel? Can we use robots as guards and workers?”

They make it quite clear they don’t vote Democratic. Perhaps some of them realize that never before have plunderers assumed that the impact of hoarding all their money has made the world close to being unlivable for everybody.

Can the plunderers ever fall off the ‘never enough’ speeding treadmill?

It takes one to know one. Even before he was president, the Orange Jesus Donald John Trump called Malaysia Prime Minister Najib Razak his “favorite prime minster.” Now we know why.

Najib Razak and his wife Rosmah Mansor are just like Donald and Melania. They don’t have any idea of what’s “enough.” Najib is now serving a 12-year sentence for stealing millions of dollars because $4.5 billion seems to be missing from the Malaysian treasury.

His wife Rosmah loved extravagant jewelry and Hermes handbags – and soliciting and receiving enormous bribes. She was sentenced to 10 years in prison and was ordered to pay a $216 million fine. That ain’t for traffic violations.

She loved to wear a $27.3 million pink diamond pendant. When the police raided their humble abode, they found $273 million in cash and luxury goods, including 567 very expensive handbags, 423 very expensive watches, and 14 very expensive tiaras.

Greed may be the worst out of the 827,000 viruses discovered by science so far.

The Credit Suisse Bank reports that 46,000 ”ultra-high net worth” (UNHW) individuals who have fortunes more than $50 million increased world numbers of UNHW to 218,200 during the recovery period of the COVID-19 pandemic. They primarily increased their wealth because of increased housing costs and the booming stock market.

In two years, the number of UNHW persons has increased by 50%. That’s 0.00004% of the world’s population, while billions of families in the poor and middle classes wiped out savings and have a titanic struggle to pay for food and energy.

There has been an explosion of wealth and a huge blast of poverty during the pandemic. Economic inequality has never been higher in modern times. U.N. Secretary General Antonio Guterres told the members that “the world is gridlocked in global dysfunction with problems such as poverty, indebtedness, online hate and harassment, and a loss of biodiversity. We have a duty to act.”

We have graphic evidence in the U.S. of the same problems with a Senate that is failing to act on any problems.

What is a year of life worth today?

Bernie Sanders keeps telling the two Joes, Biden and Manchin, the co-presidents, the truth about the economic inequality in the Divided States of America. But Biden isn’t smart enough to learn such details and Manchin has no idea when enough is enough.

The following is just a small part of what Bernie’s message is:

1. What is a year of life worth in the DSA? It depends. Unofficially, American rich live to be at least 95, and the ghetto poor die at 60. Thirty-five years is another life.
We lead the world in the rate of virus deaths per population, so our Whites have dropped 2.75 years to 77 years in two years, Blacks have dropped to 65 years, and Native Americans and Alaska natives have dropped 6.6 years in the virus years to 65.
For persons of color, the New York Times reports: “The suffering is inextricably bound to a long history of poverty, inadequate address to health care, poor infrastructure and crowded housing, much of it the legacy of broken government promises and centuries of bigotry.”

2. Our three top billionaires have more assets and cash than 160 million Americans at the bottom half.

3. In 2019 the median White household held $188,200 in wealth, Black households held $24,100. White households had an average wealth of $983,400, Blacks had $142,500. There is a simple answer. It’s called racial discrimination. Remember in 2013 when Chief Justice John Roberts of the Republican Supreme Court said voting laws could be changed because race was no longer a factor in the U.S.?

4. K-12 funding is so inadequate more than 800 school districts have gone to four-day weeks to cut costs. A shortage of teachers because of working conditions and poor benefits and salaries complicates matters.

6. Poor people in the U.S. can sell their blood plasma 104 times a year for between $25 and $60, one of the few countries that allows blood to be sold. Germans can donate 60 times a year. The veins of our poor provide two-hirds of the world’s supply.

7. We have the best health care in the world and the worst kind – depending upon whether you are in the top 10% or the bottom 10%. Most of the bottom 10% (more than 30 million) have no insurance and do not have access to care unless they qualify for a weak government program. Only 12% of Americans feel “very well” about health care while 32% say “somewhat well.”

Eight in ten Americans are concerned about access. Eighteen million could not afford the prescriptions they had ordered. Mental health care gets only a 5% approval rating.

Bernie’s Medicare for All plan has approval ratings as high as 70%. One out of six Americans have medical debt exceeding $4,600 and more than 500,000 declare bankruptcy each year because of medical debts.

8. More than 12 million families with children are food insecure. That’s a fancy term for hungry. Many don’t know where their next meal is coming from. Food banks are getting exhausted.

9. Times haven’t changed for the poor and what is left of the middle class while the rich have gotten richer. More than 40% of American families are living paycheck to paycheck and do not have $400 in savings to cover a small emergency. U.S. household income has stalled for two years.
The Census Bureau reported that the official poverty rate in 2021 reached 37.9 million people. That’s more than the total population of most of the countries in the world.
In the 14th century Dante described the nine levels of Hell in his beautifully written Divine Comedy. Please notice I have described only nine levels of income inequality of the “sinners” living in financial distress while the rich live in Heaven on gold streets.

There are many more levels of Inequality Hell.