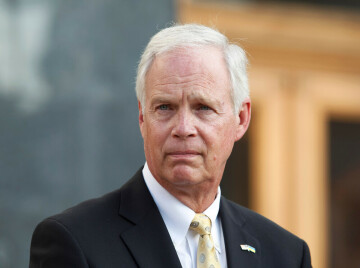 In 2016, a mushmouthed Trump enthusiast by the name of Ron Johnson said he would not seek a third term to continue misrepresenting the people of Wisconsin in the U.S. Senate. He lied.

The smarmy dope from Oshkosh, first elected to the U.S. Senate in 2010, is running again, but finally he is facing a serious candidate in Lt. Gov. Mandela Barnes, who, hopefully will unseat this idiotic bag of flatulence.

Johnson, who was born and raised in Minnesota and married into the Oshkosh plastics business he touts in his ads, is infamous for putting his smelly feet into his big mushmouth. He can’t help himself. As a privileged white man, he has repeatedly voiced ignorance about how real people live in the America he pretends to stand for.

His view on climate change was expressed last year in one word: “Bullshit!” – he sponsored the Energy Tax Prevention Act, which would block the EPA from imposing new rules on carbon emissions
Johnson has constantly opposed gun reform legislation and says mass shootings in schools happen because schools no longer teach “values.”

This privileged white man once referred in a right-wing talk radio interview to Milwaukee children as “those idiot inner city kids.”

He has opposed the Affordable Care Act from the beginning and still hopes to topple it.

He helped promote Trumplican fringe theories during the Covid-19 pandemic, including saying out loud that thousands were dying from the vaccination.

He promoted the big lie that Trump won the election, and in responding to questions about the Jan. 6 insurrection, gave statements showing his ignorance and racist bias.

Oh, yeah, the big dummy also wants to take away your Social Security “entitlement.” Read more about that in Phil Anderson’s column on page 10.

Johnson is, quite simply, a dangerous idiot who needs to be relieved of all public duty.