The music and muse of Jim Hall 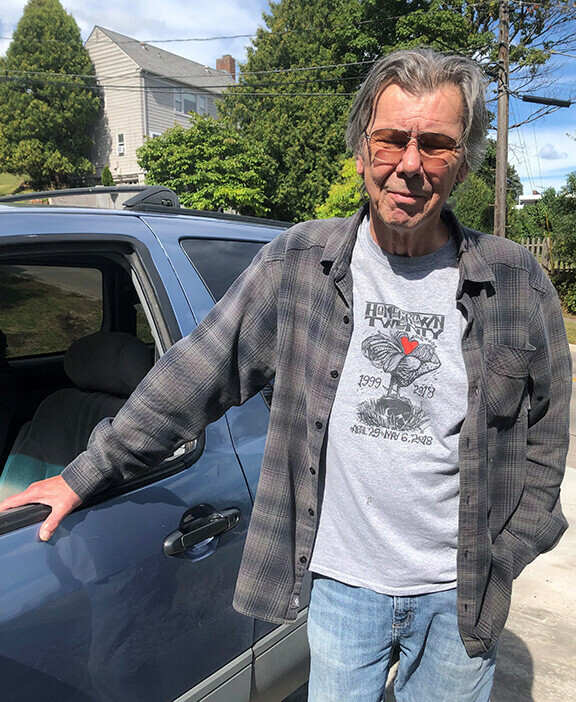 I met Jim Hall less than a year ago during an informal jam. At the time I had no idea who he was, but all the other musicians present sure did. They lavished on him praise on his appearance on The Slice, the Perfect Duluth Day TV post (PDDTV). Nor did I even know what The Slice was at the time, having lived back in my favorite city for just more than a year.

That evening Jim played acoustic guitar, singing songs I wasn’t familiar with. They may well have been originals. His playing clearly elevated the music that evening to a deeply satisfying groove. His quiet, self-effacing demeanor contrasted with his masterful and confident playing and singing.

I was informed that Jim has been around the music scene in Duluth for decades, more than 50 years in fact and that he, as a member of Azure Du Jour, opened the Bayfront Blues Festival in 1997. (The band performed there in 1998 and 2001 as well.)

Perhaps I had heard him since I had attended a couple Bayfront Blues Fests back then.
Intrigued, I went online to see what was out there about him. I learned of his musical connections with the likes of Charlie Parr, Randy Anderson, Jamie Ness, Joe Lindzius, Robin Anders and, during the last decade, Lee Martin.

Paul Whyte, an earlier music reviewer for The Reader, asked Jim back in 2019 about music which evoked this response: “Well, it’s always been kind of a meditation, of being in the moment. I put my head down, close my eyes and just be in the moment. It’s a way of communicating.” 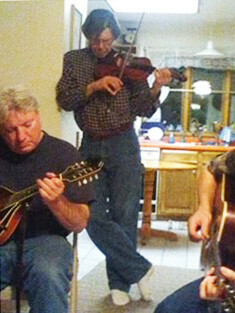 Having witnessed this at close hand, I began to understand what he said in another interview about playing with “big ears.” He is highly focused in his listening, observing and responding. He also reveals himself and his outlook with occasional wry witticisms.

In conversation with Jim I learned that, unlike many other musicians, he wasn’t brought up in a musical family but picked up the guitar on his own around age 16. He says has some Indian blood and attributes dreams and spirit guides with drawing him into music. Obviously, he has followed those otherworldly influences.

After high school Jim was asked to join some neighborhood guys who had formed a band and needed a vocalist for their covers of The Doors, Jethro Tull and Led Zeppelin songs. Later he was playing covers with The Pulse, a college FM radio band and a band called Shut Up and Drink that performed in Ely back in the early days.

When asked what music influenced him early on, he said what was playing on the radio – Dylan and Beatles and such. The result has been a long list of Dylan songs he performs regularly, particularly during the annual Duluth Dylan Fests.

Like many musicians, Jim traveled around the country in his younger days, playing solo gigs, joining and forming bands with other musicians. A stint working for his father in Santa Cruz, Calif., led him to explore musical options in Venice Beach, Santa Monica and Colorado Springs before returning to Minnesota, first to Minneapolis and eventually back to Duluth.

By that time he had learned to play the bass guitar, fiddle and harmonica. Along the way he joined any number of bands that played various genres – Stony Lonesome, Wet Dog, Spotted Mule, Lo-Fi, Cowboy and Kristy Marie & the Forget Me Nots, The Original Sawtooth Mountain Boys, The Little Big Band, Blue Healers and his own Jim’s Country Laundry (so named because the band had a washboard player!).

When he was hit by a truck back in 2002, Jim’s playing with Azure Du Jour slowed while he recuperated. A CD by that group, Shorty Sings The Blues, was released in 2004. The group was resurrected in 2016 after a six-year hiatus.

In another setback, Jim lost the upper range of his voice. Yet he is resilient and continues to sing and jam at least a couple days a week.

Making music with others, be it folk, blues, bluegrass or Middle Eastern sound explorations, along with his solo work and songwriting, has allowed Jim to explore the full range of his musical leanings.

He has recorded, by his account, at least a couple dozen CDs. I’ve had the opportunity to listen to eight of them; one, a Blue Healers album (title unknown), is highly produced and really rocks. And I noticed that dreams (“Three Legged Bullfrog”) and heartbreak (“What Is On Your Mind”) are reoccurring themes. I found “Problem Tune” to be an apt comment on our society.

Jim’s vocalizations are now in the lower range, described by some as raspy, like Tom Waits’; he prefers comparison to Howlin’ Wolf.

But it is his throat singing, which he says he did as an infant, that I find most mesmerizing. (I first heard this back in the mid-1990s at a concert by Mongolian Throat Singers at the Cedar Cultural Center in Minneapolis.).

Jim’s 2013 performance, Live From Sacred Heart, featured his throat singing as well as scat and a Rumi poem set to music. A 6-track CD, Primitive Mystic, with Robin Anders and on which he played a seven-string guitar and incorporated Middle Eastern tones, is the one I liked best.

Jim has played virtually every music spot in the area the past few decades, the list of which contains a historical record of now defunct venues: Mr. Frank’s East, The Red Herring Lounge, Bayfront Blues Saloon in Superior, Red Mug, Kozy Bar and the Amazing Grace Café in the DeWitt-Seitz Building.

Of course the list includes ongoing establishments such as Sir Ben’s and Thirsty Pagan, which brings and brought me to his current Sunday evening gig at Wasko’s in Lake Nebagamon, Wis.

Now this was a bonafide excursion into the wilds of Wisconsin. About an hour’s drive from Duluth, it is one of those lakeside campground bar/community rooms, in this case on Lake Munising.

I would describe it as a “PC-free zone.” Jim gave me fair warning that is was a very “basic joint” and as such it was an interesting adventure to a back woods retreat or oversized man cave. The décor featured scores of antlers and taxidermy; deer and rabbit heads, fish (including a record-size Northern Pike from the lake), and other creatures, plus upside-down trophies hanging from the ceiling, a chainsaw, flags, posters and sexually explicit signage.

A mini-casino, pool table and piano rounded out the furnishings. Above the performing area is a six-part Wasko’s sign made up of 3,600 bottle caps, undoubtedly mostly from bottles of beer consumed there.

The owner, Chris Zoltak, manning the bar, immediately sized me and my partner up as “newcomers” but welcomed us anyway.

Wasko’s regulars were treated to “the bird” from his right hand. He confirmed that Jim had been playing there regularly for the past decade. Soon the magic, as Jim described music making with Lee Martin (of Feeding Leroy fame), began.

Billed as an open mic session, it appears to actually be a regular jam session featuring the two of them, although last winter, when Lee was in Texas, Jacob Mahon sat in.

The tunes were rousing, with Lee on electric and pedal steel guitar and in full voice, Jim on fiddle, slide guitar and harmonies. 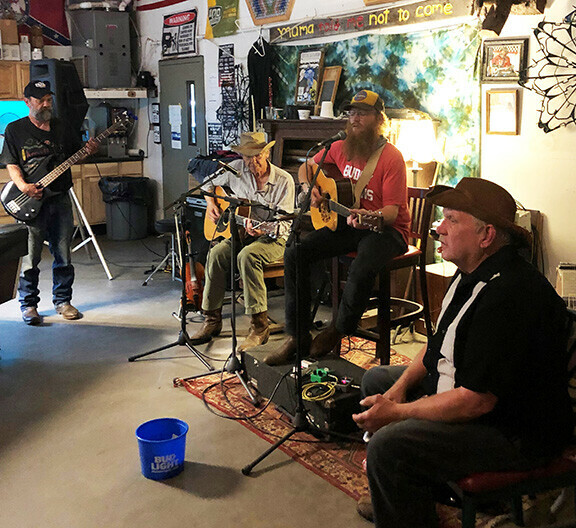 On that Sunday, Aug. 28, they were joined by Joe Tillman on bass guitar and Ron Finstad providing percussion on spoons. The first set we heard were mostly well-sung covers: “House of the Rising Sun,” “Willie Nelson Ruined My Life,” John Prine’s “Long Monday,” “Long Black Veil,” Neil Diamond’s “Cracklin’ Rosie” and Kris Kristofferson’s “Help Me Make It Through The Night.”

After a short break it was Jim’s turn to solo with both covers and his original songs. When the musicians resumed jamming, they got into great old-timey tunes, including some by Woody Guthrie (“Way Over Yonder in the Minor Key”) and the classic jug band tune, “Boney Fingers.”

Lee encouraged the folks in attendance to imbibe, announcing “the more you drink, the better we sound!”

One of the endearing aspects of this place was the sharing of food, evidently another Sunday night tradition. A dog roamed the place, looking for food scraps and checking out my leather jacket with his teeth.

When he puked a little later on from all the hot dogs he ate, the crowd was admonished not to feed him! That’s just to give you a taste of the fine ambiance of Wasko’s.