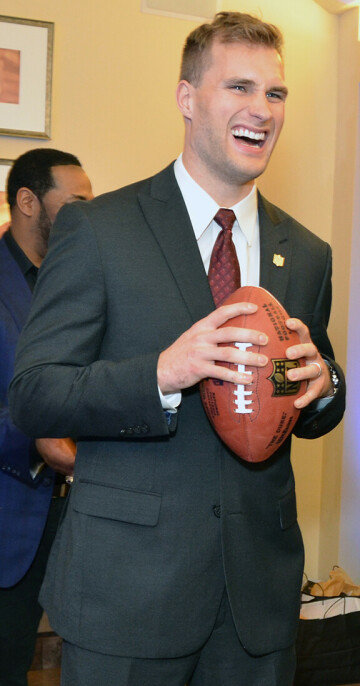 Kirk Cousins, the oft-criticized Vikings quarterback, directed a 78-yard touchdown drive late in the first quarter for a 7-0 lead. Cousins stepped up in the pocket and got good protection, hitting Justin Jefferson with 20 and 22 yard bullets, and when it got tight down near the goal line, Cousins hit Jefferson again for a 5-yard touchdown.

That was a critical drive for the offense, filling the unit with confidence for the rest of the day.
But the two most critical plays came on defense.

One was sheer luck, on the Packers first play after the Vikings touchdown. As we’ve seen Rodgers do so often, to the Vikings and every other team the Packers play, he went for immediate retaliation, and sent a receiver flying up the right sideline.

Only this time, instead of the departed Davonte Adams, it was Christian Watson, a rookie from North Dakota State. Watson, whose speed assures him of becoming a Packers stalwart, blew past the Vikings defense and was 5 yards in the clear when, typically, Rodgers launched a perfect pass that came down gently into Watson’s outstretched hands, so he could catch the ball in perfect stride and take it the rest of the way to the end zone.

Instead, he dropped the ball. Replays from every angle showed the ball hitting both hands and falling right through.

Next, the Packers marched for what appeared to a sure touchdown that would again provide balance in the first half. The Vikings defense held, against the injury-riddled Packers offensive line, and on fourth and goal from the 1, the Packers went for it.

With four receivers blanketing the field, we were all pretty sure Rodgers would either drop back or roll out until he found an open target. Instead, in one of the least-creative plays I’ve ever seen from a Rodgers Green Bay team, they called for a straight, up-the-middle handoff to A.J. Dillon – right into the heavyweights on the Vikings defensive line, which stopped him before he could get to the line of scrimmage.

Another Packers touchdown averted, and the Vikings were, basically, home free.

There were a lot of surprises throughout the NFL Sunday, as well as in college on Saturday.
Washington State stunned Wisconsin in one of those, and Marshall shocked Notre Dame in another, and if that wasn’t the biggest surprise, then certainly it was when Appalachian State beat Texas A & M.

Meanwhile, Alabama narrowly protected its No. 1 ranking with a late field goal to subdue Texas 21-20.
What was less of a surprise was that UMD fell to Minnesota State-Mankato, to even their record at 1-1 coming home this weekend.

It also, alas, should not be a surprise that the Twins have staggered with what appears to be a pennant-race blow-up, coming home with high hopes and getting swept at Target Field by the first-place Cleveland Guardians in four straight games.

That dropped the Twins to a game less than .500, and while they still could resurrect their hopes in the last two weeks of the regular season, it’s doubtful.

And it’s doubtful because the Twins might have put on display some of the dumbest, most ridiculous blunders ever seen by a Major League team.

Let’s recount just some of them:

• Runner on second, one out, and a Texas League fly ball is hit to left field. The left-fielder comes on the dead run, and even on TV you could see he was going to catch it. He does, and throws to second base – easily doubling off the Twins runner who had inexplicably broken for third while the ball was in the air!

• Another came when the Twins had rallied to close the gap and got a single, then manager Rocco Baldelli sent in his recently added third-string catcher, who has great speed. He takes a small, three-step lead, and got picked off! Apparently he was looking past the pitcher at the third base coach, the pitcher noticed, and threw a knee-high strike to first to get him. But how embarrassing to be sent in as a pinch-runner and immediately get picked off?

Nick Gordon is a real attraction, now that he’s getting some regular duty. He’s good in the outfield with his great speed, and he’s done a good job filling in at second base more recently.

But he’s responsible for a couple of plays that could best be described as boneheaded.

Trailing 5-0 against Cleveland, the Guardians had runners on second and third, and a hard ground up the middle got past the pitcher – remember when pitchers used to be able to field an occasional grounder? – and Gordon, on the shift, was in perfect position to grab the grounder, trapping the runner on second 20 feet off the bag.

Now, there are infielders who play for Duluth Marshall who would have wheeled and gunned down the runner at the plate, but Gordon, so intent on catching the runner trying for third, kept up his pursuit.
Sure enough, he caught him and tagged him out. But it wasn’t the third out, and the Guardians boosted their lead to 6-0.

Gordon, a week ago, cracked a long blast that was headed for the fence in center field as the Twins were in the process of making up a rally from a 7-2 deficit. Gordon took three or four casual jogging steps, but the ball didn’t get out, and ricocheted off the top of the fence heading back toward the infield.

All three runners on base scored, but Gordon, despite his great speed, was thrown out diving into third for a potential triple.

Making the third out at third base is a no-no, but giving up a run in a game that ended up 7-6 might prove the Twins’ ultimate undoing.

The other big surprise in the past week was when UMD weathered a lot of social media ridicule for changing the mascot’s uniform from grey – the color of bulldogs – to yellow, which led some to say it’s not a bulldog now, it’s Winnie the Pooh!

A key thing was designers made the critter’s eyebrows furrowed as if in hostility, so it looked like a crazed Winnie.

Whether new athletic director Forrest Karr stepped in as his first official act or not, he gets credit because UMD decided to switch back to the old, familiar, comfortable grey pooch.

And you know? With a bulldog you don’t have to make it artificially appear hostile. Congratulations, UMD.