The bear who gave us a sunset 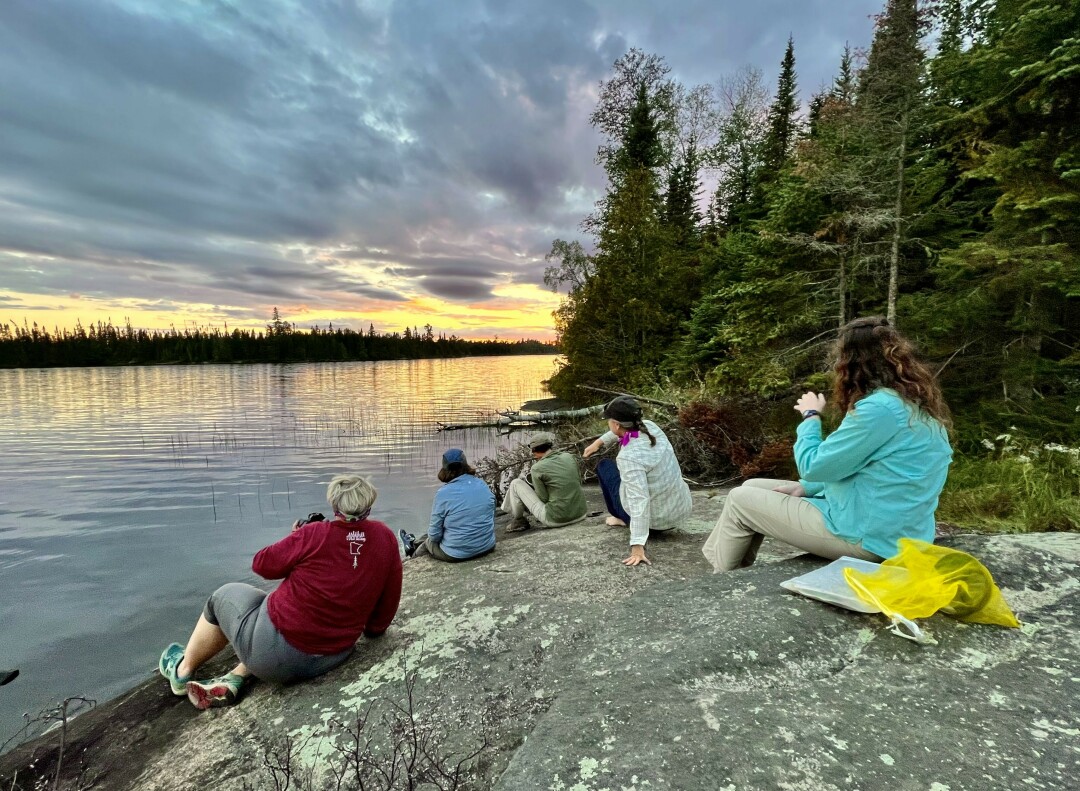 Our new campsite, chosen after the bear invaded our previous one, offered up a gorgeous sunset. Photo by Peter Marshall.

The voices filtering through our Boundary Waters campsite were so calm and sweet-sounding it took me a minute to process the words: “Hey, bear.”

Lake water dripped from my swim shorts, and I continued toweling off in the sun while the meaning sank in. “Hey, bear!”

Looking across the wilderness campsite, where a group of colorful tents lined the woods on the way back to the latrine trail, I saw a fuzzy black shape in their midst. Ally and Caleb, a young couple who’d been resting in a hammock, were calmly talking to the bear, waving their arms, and doing all the right things to let the bear know that camp was full of humans without startling it. The bear did not care.

Likely only two or three years old, his fuzzy back was barely taller than Caleb’s waist, and he showed neither aggression nor fear. He looked healthy. And he kept walking forward, having learned through experience that he could stroll right up and grab some tasty food if he ignored the humans diligently enough.

Although this was the first time I’d ever had a bear in camp, I didn’t feel we were in danger. Black bears rarely attack humans, especially if they’re not surprised. So I calmly hung my towel on a tree branch and headed over to help, stopping by the fire pit to grab a couple of lids from the cook set.

The metallic banging alerted Peter, who had been napping, that the voices weren’t just part of a dream. He popped out of his tent, just as the bear was walking past.

“Don’t run!” called Ally (a wildlife biologist), with some urgency in her voice. Running away can sometimes trigger a chase. 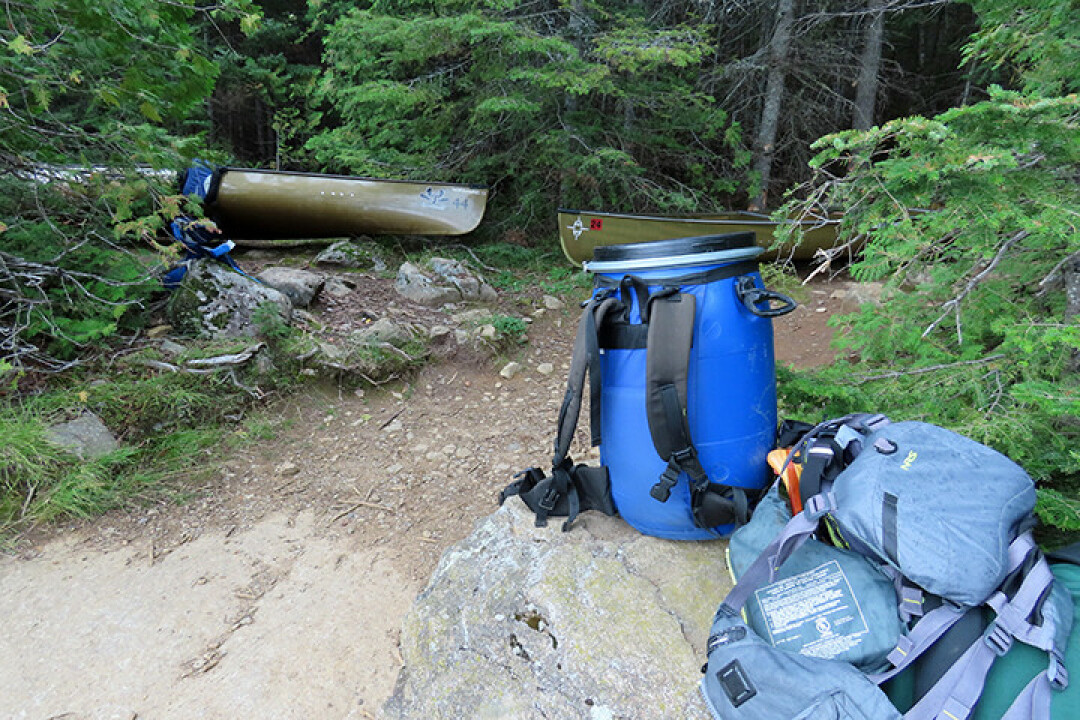 Here’s the blue plastic bear barrel that kept our food safe from the marauding bear. It’s not 100% bear proof, but if you attach it to something so the bear can’t drag it away, the durable seal gives you more time to scare off the bear before he snatches all of your s’mores fixings.  Photo by Jill Joswiak.

Peter didn’t exactly run, but his sudden appearance and quick steps away from the bear, combined with Ally and Caleb’s increased shouting and steps forward, did turn the bear down into the woods beside camp. He circled around, and popped out on a narrow nature trail leading off into magical glades full of blooming twinflower and fairy-fan fungi we’d admired on an earlier walk. Where had the bear been then?

Bob, the most experienced participant in our midst, came to stand beside me as I banged on the pot lids. The bear didn’t retreat. Bob took a step forward, and the bear backed up one step in a long-distance dance.

Then a softball-sized rock bounced in front of the bear’s nose. I turned to look just as Ally’s second rock followed the first. Now the bear turned, perhaps with a smarting nose, and slowly disappeared into the woods.

The eight of us – mostly strangers – brought together on this Cable Natural History Museum-sponsored trip, all gathered in the center of camp to make a plan.

First, we celebrated. This had been a pretty successful bear encounter. No one panicked. Everyone helped drive the bear away. The bear wasn’t rewarded, because our food was stored properly.

Being bear aware is always part of a Boundary Waters trip, but we’d been on high alert. As we’d loaded packs into canoes at Rockwood Outfitters just a couple days before, Mike had mentioned that Gaskin, a bigger lake nearby, had problems with a persistent bear in campsites earlier in the summer, but that the bear hadn’t been seen since the blueberries ripened.

Then, the evening before our encounter, two parents with two kids still small enough to sit side-by-side in their aluminum canoe had paddled past our campsite late in the day.

Those two shots we’d heard earlier, explained the dad, was him firing his gun as a bear invaded their camp and came too close for comfort to their kids. So alerted, we locked our blue plastic bear barrel up tight, put the cook set on top as an alarm, and fastened the shoulder straps around a tree so it couldn’t be dragged into the woods.

Now, though, the bear was real, food-focused, and not easily scared. I looked at my watch. 4:30 p.m. There was some discussion, some disagreement, and then a decision to seek a campsite on the next lake.

We had our tents packed neatly into our portage packs and the last boat pulling away from the landing 40 minutes later. As Jill and I ducked under the curtain of cedar branches that framed the landing, she looked backward from her seat in the stern of the canoe. “The bear is coming down the landing trail!”

I turned around in the bow to look at her. “Are you joking? Really? Seriously?” It would have been a good joke. Instead it was absolute justification for moving camp away from this pest.

Having previously practiced our paddling and portaging skills all morning on a day trip, the group moved like a well-oiled machine. Tossing the canoe off my shoulders on the far side of the portage, I gazed out across the lake. The slanting rays of evening sun shone on a classic rocky campsite – unoccupied. A hallelujah may or may not have been playing on the wind.

Soon we were relaxing on that beautiful rock with bowls of warm food in our hands, as a magnificent sunset played across the smattering of clouds. A fingernail moon peeked out, too. Pretty soon, the Milky Way splashed a path across the dome of stars, and beetles darting on the quicksilver surface rippled Jupiter’s reflection.

Our previous campsite, cradled by trees, had been perfect on the gusty day we chose it, but without much of a view. Now, as the wind finally subsided, the bear gave us a site that matched the sunset perfectly. We reveled in our good luck as the Big Dipper rose behind us.