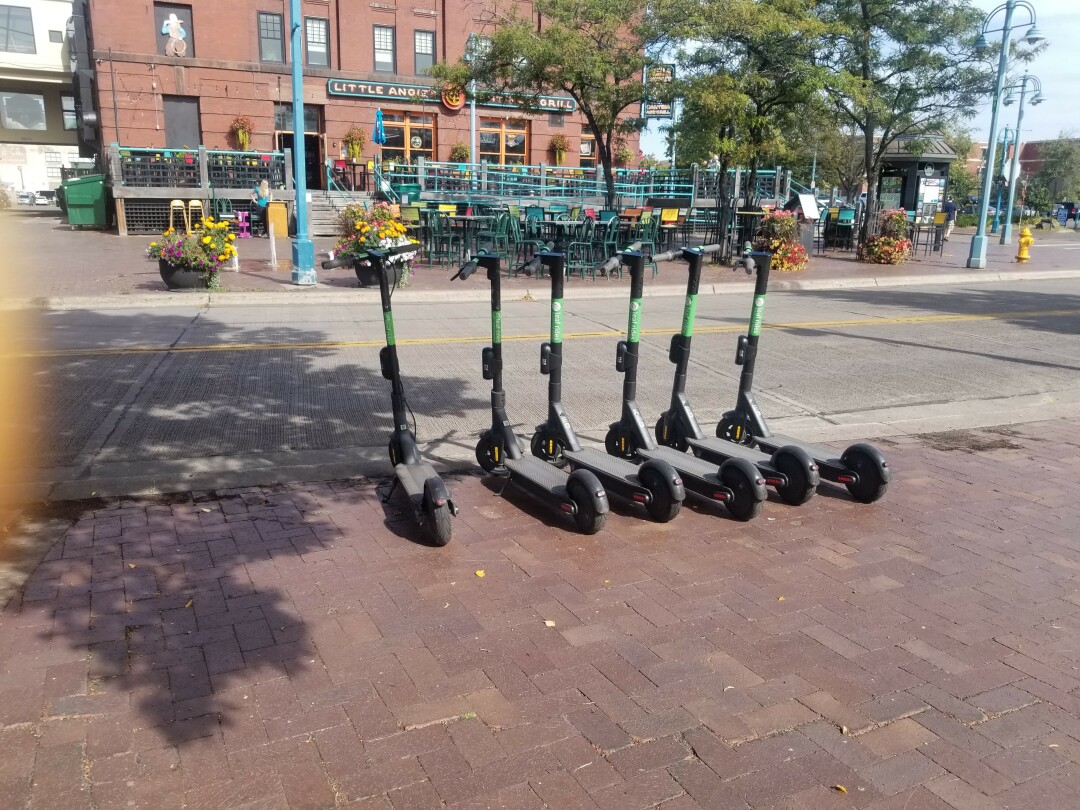 Have you ever been a passenger on routes where you normally do the driving? During these times we often notice things we didn’t notice before. It is like we are seeing the world with new eyes.

Area electric scooter rentals allow one to get a new perspective on Duluth and even long-time residents will suddenly see old things for the first time. Being out in the open and going at a slower speed helps produce this greater perception.

There appear to be two companies in Duluth renting scooters. For this article, I drove a Leaf Scooter.
Not liking to pay for parking I tried to find a scooter a little off Canal Park. I downloaded the app first and signed up for an account and entered my payment information. When you open the Leaf app it shows a map with symbols indicating where the scooters are located.

The map showed two scooters a little down Park Point. When I got there the map seemed to show the scooters being behind a fence at the Coast Guard station. I figured the map had to be off, so I drove around the nearby hotel thinking I might see them there. I did not find them. So, I have to admit this part of the adventure was kind of a fail.

So, I went back to Canal Park and parked in the big lot right across from the Dewitt-Seitz Marketplace. There were a number of scooters parked on the sidewalk in front of me.

I scanned the barcode with my phone, selected “unlock” and the scooter worked. I decided first to go down Park Point.

A few weeks ago, I interviewed Rachael Sand of e-Bike Duluth for the article “Flattening Duluth with e-bikes” (which you can read at duluthreader.com). She mentioned how the scooters are great on flat, smooth ground but don’t work as great going up hills and on rough ground.

To be honest, I haven’t ridden an e-Bike yet. I need to do it sometime before it gets too cold to make a proper comparison. I did however see several people taking e-bikes up Seven Bridges Road with no problem.

I did notice the scooter had kind of a tough time going up that little hill on the Lift Bridge. Also, that steel grid you have to ride over didn’t feel too great. But the view and the experience were great!
Out in the open, I could feel the wind and hear all the noises. The water never looked so blue and the boats so big. I could observe the people on the pedestrian path. including a skater carrying a board over the water.

I got a better sense of the structure of the bridge and how the concrete pathways connected.
Of course, I could have observed things even better by simply walking over the bridge, but the scooter allowed me to take in so much more area in a shorter time, with views similar to walking.

Over the bridge I road on the east shoulder, which is a bike lane during the warmer season. The top speed of the scooter on flat ground was about 13 mph.

I noticed all kinds of interesting houses I never noticed before. I made it to where the old gas station used to be and went back to Canal Park.

Not being in a car, I effortlessly glided past the electric arm, on the parking lot by the Maritime Center. I then got on the Lakewalk, which honestly is where I should have started.

The paved part of the Lakewalk was smooth and there were lots of scooters on it, but not so many that I felt crowded. I was able to go at full speed and occasionally slowed down when approaching a group of people.

I noticed a lot of features behind the hotels that are hidden from a person in a car. I got a much better feel for that section of Canal Park along the water and north of Railroad Street. I enjoyed the art along the wall and I stopped to take a photo near the group of war memorials.
When I was done, I simply parked the scooter and clicked “end ride.”

I had a very fun time, though I have to say $13 was kind of expensive for a 28-minute ride. Since the scooters are geared toward tourists, this wasn’t too surprising.