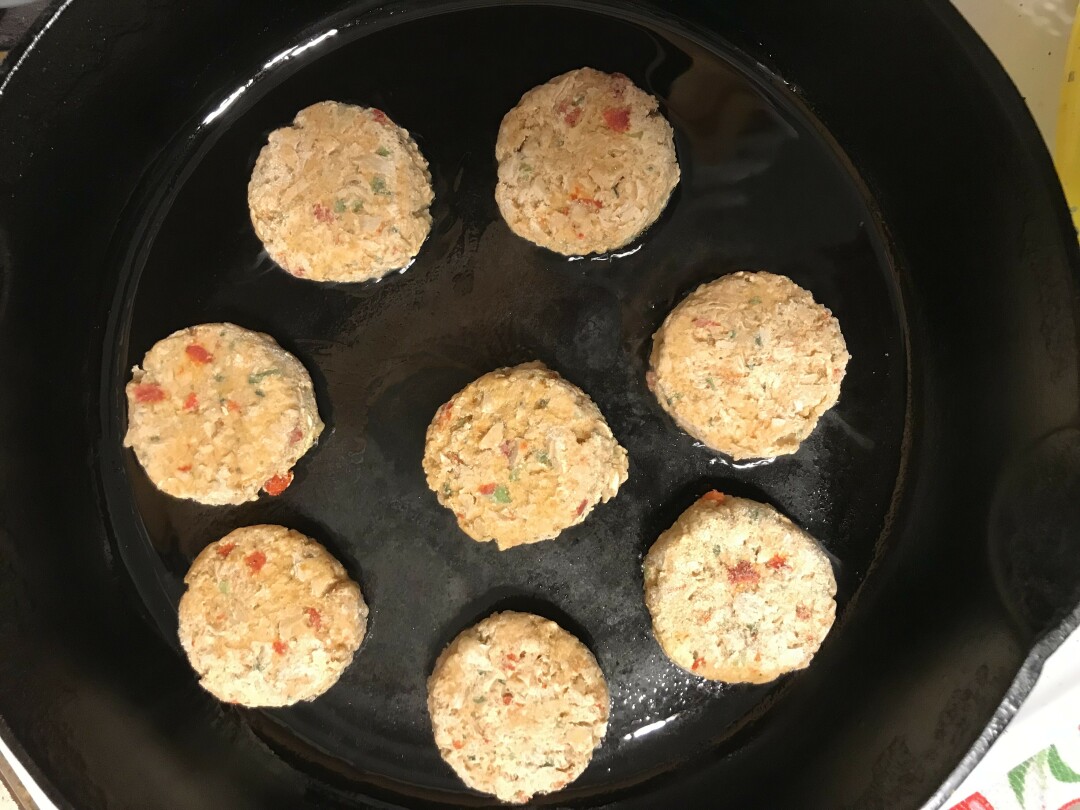 How could I pass up this – New England-style Plant-Based Crab Cakes that claim to have “real seafood taste” and “lump crabmeat-style texture.”

The box the eight round crab cakes come in includes a recommended Sriracha Remoulade Sauce, which I also made, minus one of the five ingredients – I had the mayo, capers, sriracha and lemon, but not the chives.

Knowing I could not possibly eat them all myself, I cooked all eight, following instructions to put them in a lightly oiled and heated pan – preferably cast iron – putting a lid on top of them and flipping a couple times during the 8-minute fry.

The probable reason for doing all at once is that I wanted to see what they looked like in the pan after noting a longtime pet peeve in the instructions, specifically instruction No. 2, which states: “Place frozen cakes on skillet. Do not overcrowd.”

That word went viral back in the 1990s when I was working for daily newspapers in Wisconsin and there were constant discussions of building a supermax prison because of crowding in other prisons. However, no one – except the newspapers I worked at as a copy editor – said the prisons were crowded. Every other reporting outlet and the government itself said the prisons were “overcrowded.”

Something is either crowded or it is not. Putting “over” in front of "crowded" is useless bureaucratese, just like using the ugly, pretentious word “utilize” in place of the perfectly good “use,” a usage trend I have noticed has gotten inexplicably worse in the last decade.

Anyway, you would have to be working with a very tiny skillet to crowd these eight small disks of fake crab cake. There were vast amounts of room in my 10-inch cast iron pan for the crab discs. You could add another box of them to the pan and still have room. Perhaps the folks at Good Catch, makers of these crab cakes, are Lilliputians with very small pans.

A faint seafood aroma wafted through the kitchen as the crab cakes warmed.

Finally, to the tasting. I dipped the first one into the suggested sauce (minus chives), and, yes, there certainly is a lumpy texture. The sauce added heat to the bite, but I immediately wished the recipe had called for some lemon juice in the sauce instead of just lemon zest, because the zest was not at all cutting through the heat of the sriracha. I added a squirt of lemon juice to the sauce for the next cake, and ten it was more to my liking.

Yes, it’s a pretty good imitation crab cake, but what’s inside? The foundation is the company’s six-plant protein blend of pea, soy, faba and lentil protein, as well as chickpea flour and navy bean powder.

There is also a photo of a serving suggestion on the box – crab cake sliders. They look good, but I would like to know where in the world to find buns small enough for these cakes, which are smaller in circumference than a 50-cent piece. Those folks at Good Catch must really be Lilliputians!