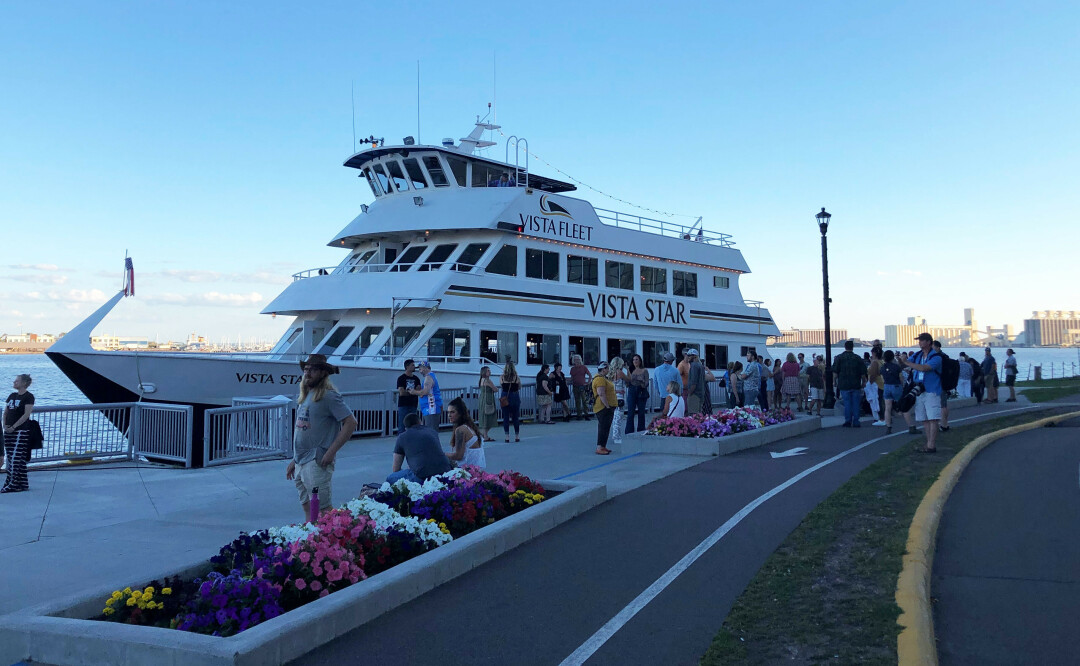 It was one of the warmest days we’ve had this summer with 80-plus temps – an excellent time to be out on the water, so it was fortuitous to have purchased tickets for a sunset cruise on the S.S. Rock.

It was on Thursday, Sept. 1, that a capacity crowd of 200 (all fools for music) boarded the temporarily renamed Vista Star to hear the music of three bands: Damien, Teague Alexy And The Common Thread and New Salty Dog.

The long line of ticket holders delayed departure well beyond the advertised time of 7 pm and forced Damien to begin its 40-minute set while still moored.

Some of us missed a few of the band’s numbers since the second deck where the band played was so stifling and the breeze on the top deck so enticing. Soon though, word filtered up that music was really happening so we crowded down below to hear this newly formed band comprised of Alan Sparhawk, his son Cyrus, Owen Mahon and Marc Gartman performing its innovative fusion sounds.

Finally the boat cast off, drinks flowed and dancing began despite the rising temperature on board.

Alan Sparhawk noted that this outing was reminiscent of the old “booze cruises” operating back in the 1980s (before my time in the Zenith City).

It made me recall another such cruise back in 2002. It was on the Captain J.P., a boat moored at Troy, New York, which plied the waters of the Hudson River. It, too, was a very warm day in August that called for gin and tonics. But it was the band – Commander Cody – that made that cruise memorable. There’s nothing like rock and roll on a boat with a captive audience and so it was this past week with our three talented local bands.

Second up was Teague Alexy And The Common Thread playing on the first deck, which was far more comfortable since the windows were open to the fresh breezes off the water. I’ll admit I was having too much fun to take notes about what tunes were played, but the boat was really rockin’ by this time.

With only 40 minutes for each band, the crowd didn’t hold back from dancing. Then it was back up to the hotter than hell second deck to hear and dance to the music of New Salty Dog. Did that dampen anyone’s spirits? Nope.

What I found interesting was the strong turn-out by young adults. I guess the ticket price of $25 wasn’t a deterrent for them. And indeed this was a steal for a chance to hear three great-sounding bands – all clearly having devoted followers – in addition to enjoying a cruise around the St. Louis Bay.

What a way to spend a summer evening with its clear “Maxfield Parrish sky,” a waxing crescent moon and spectacular close-up views of the ore docks.

According to Marc Gartman there may be a S.S. Rock II cruise next summer. (Ship of Fools II? Hope so!)

My ride on the S.S. Rock conflicted with the Thursday evening kick off of the 36th annual Duluth Superior Pride Festival, but I was able take in much of the music in Bayfront Park on Saturday, featuring several good local bands. There was a strong turnout and it was a very diverse crowd, including lots of families.

The Pride Parade on Sunday was similarly festive and all inclusive; both events provided people watching at its best. Congratulations to the organizers. It was a wonderful way to demonstrate “More Love. No Hate.”