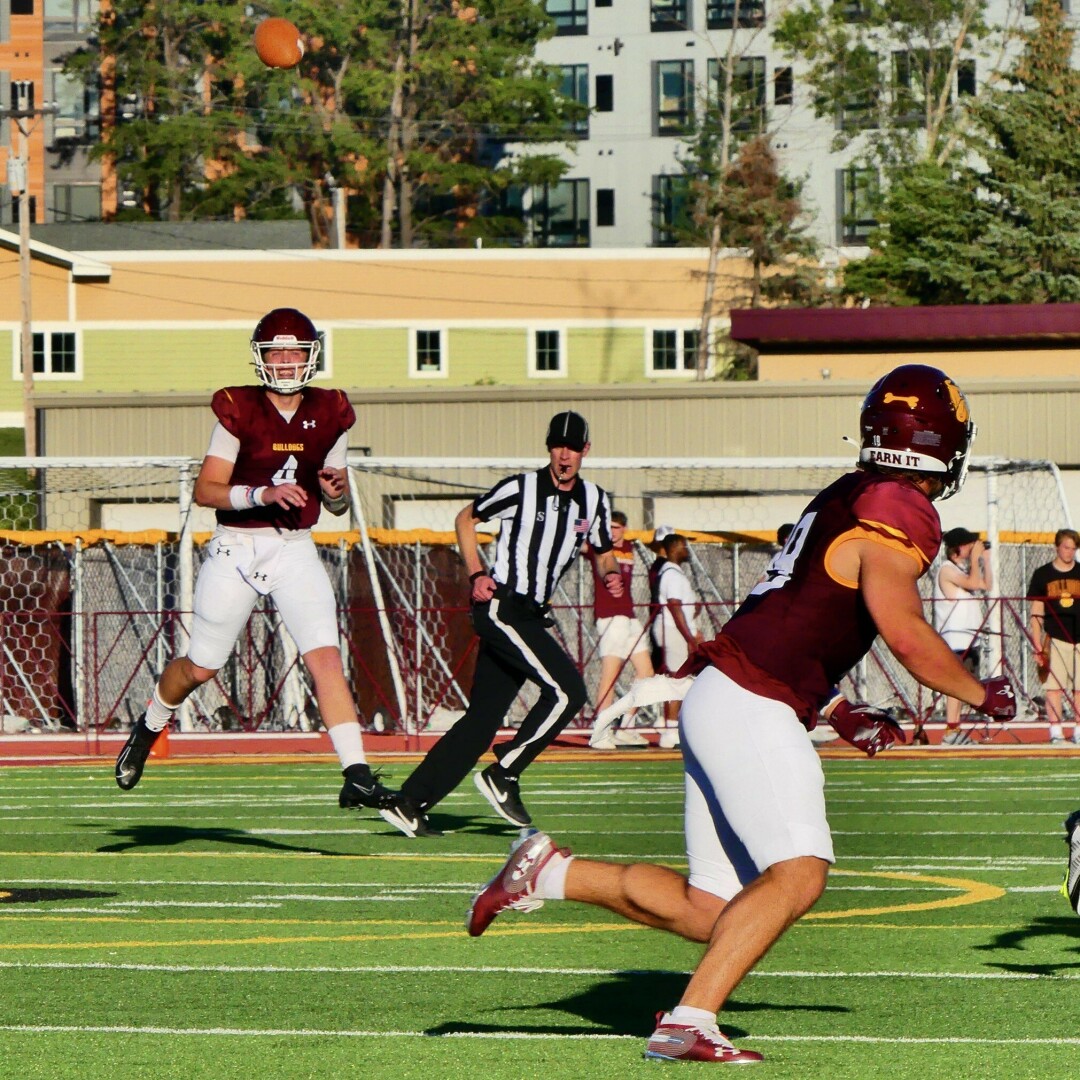 For most of two decades, the UMD football team assured itself of Northern Sun championship – if not national Division Two – contention based largely on its wealth of sustainable talent at quarterback. Other teams might scramble to find a one-year signal caller, but the Bulldogs always seemed to have a skilled quarterback who might start three or four seasons.

Until the last couple of years, at least. Then the Bulldogs needed to display coach Curt Wiese’s skill at recruiting talent in depth at the position. Last season was the worst, as every time a starting quarterback was named, he seemed to go down with an injury, and only the success of back-ups kept the Bulldogs in contention.

It looks like the fall of 2022 might be another challenge to UMD’s QB depth, but if so, the Bulldogs are well-prepared.

This season opened last Thursday on a perfect Sept. 1 afternoon better suited to visiting the Park Point beach than to crowd into Malosky Stadium – which 3,576 spectators did, to watch UMD open its season with a 31-21 victory against unpredictable Southwest Minnesota State. Bright sunshine and 85-degree heat greeted the teams, and perhaps fooled the fans, who might need several more layers of insulation a month from now.

Coach Wiese, who had watched his crop of quarterbacks all play well through training camp, named Garrett Olson to start Game 1, simply because he had played well when forced into duty by injuries to starter John Larson and backup Logan Graetz.

Besides, with Larson having graduated, Wiese wanted to remove the drama of waiting to name his starting QB.

Olson started strong, executing the demands of UMD’s signature run-and-pass duties for every quarterback. Olson made a couple of nice runs, then was blasted by a hard tackle while guiding the Dogs to their first touchdown.

That came on a slick play where Byron Bynum came in motion right to left and grabbed the ball with perfect timing before cutting into the end zone for a 6-yard touchdown and a 7-0 lead. Olson, however, had been shaken up on the hard hit, and some suspected a concussion when Logan Graetz took over on the next series.

This would prove to be the perfect test for Graetz and the Bulldogs, because Southwest State was not about to roll over and go quietly. That was signaled when Jesse Sherwood took a handoff and burst up the left sidelines, right past the UMD bench, and went 54 yards for the tying touchdown at 7-7 before the first quarter ended.

Sherwood wound up with 25 carries for 156 yards, and later scored his second touchdown when the Mustangs came back from a 21-7 halftime deficit for a 21-21 tie in the fourth quarter. He was pretty well matched by UMD’s sixth-year senior Wade Sullivan, who carried 26 times for 121 yards, most of them heavy-duty carries against a tough Mustangs defense.

As good as that defense was, UMD hurt itself by drawing an assortment of penalties to negate some impressive gains.

The difference in the game was the Bulldogs ability to come up with big plays – two of which happened in the second quarter. Graetz lofted a pass into the end zone and Kurtis Weigand made a leaping catch and a near-somersault landing right in front of an appreciative UMD student section to break the 7-7 tie.

Before halftime, Graetz also found primary pass-catching threat Armani Carmickle, who showed there might be reason for wearing No. 1 as he turned the play into a 52-yard touchdown and a 21-7 halftime lead.

Ordinarily, that would be reason for a visiting team to buckle, but the Mustangs have a different culture under first-year coach Scott Underwood, and about time the fans might have thought this one was in the bag, Justus McComb scored a 10-yard touchdown, and Sherwood notched his second touchdown of the game. Shockingly, the score was suddenly 21-21.

But under pressure, Graetz came through again, passing to Noah Skifton for a 43-yard touchdown to break the 21-all tie, and putting the Bulldogs in position to control the ball and add  28-yard field goal by Curt Cox for the 31-21 final. Graetz, who compiled 230 yards passing after Olson got 13 on a 2-for-3 start, also gained 24 yards on five rushes.

But it was, as they say, closer than the score indicated, and things could be even tighter this Saturday, when the Bulldogs go on the road to face Minnesota State-Mankato.

Other big football news, of course, is the start of the Vikings NFL season with an opening date against the Green Bay Packers.

Optimism is running rampant through the Twin Cities media, and predictions are all about the Vikings winning the Central Division by climbing over the Packers and ageless Aaron Rodgers, as well as beating a vastly improved Chicago Bears and Detroit Lions outfits.

Even Patrick Reusse, the usual Minneapolis Star Tribune curmudgeon, predicts the Vikings will win the division.

I hate to throw cold water on all that sizzling optimism, but having a new general manager and coach doesn’t guarantee that all-new defensive and offensive schemes will work out.

My biggest concern remains Kirk Cousins, the veteran quarterback who has proven very effective at throwing 4-yard passing plays – if he’s given a shield of blockers – but has also proven incapable of scrambling under pressure and finding secondary receivers wearing the correct jersey when he does.

The Cousins Brigade of Boosters point to his lofty overall quarterback rating and passing percentage, but those stats overlook some key facts: During the entire 2021 season, Cousins ranked last in the entire NFL in quarterback efficiency in the fourth quarters of Vikings games, with a miserable 39.1 rating.

In case you haven’t noticed, a lot of games are decided in the fourth quarter, and the Vikings may get a rude reminder when they see one of the best fourth-quarter quarterbacks in all of football in Aaron Rodgers.

As we also start to look ahead to hockey, the crafty Canadians once again set up and then blindsided Team USA to win the IIHF World Women’s tournament gold medal in Denmark.
Brianne Jenner scored both goals for Canada, which has lost to the U.S. 5-2 a week ago in preliminary round play.

The Canadians, however, knew that round was merely for seeding and played a much  more inspired game with the gold medal on the line.

The U.S. and Canada have played in all but one of the IIHF gold medal games, and both teams waltzed through blowout semifinals.