A little bird told me about Wildwood Rehab 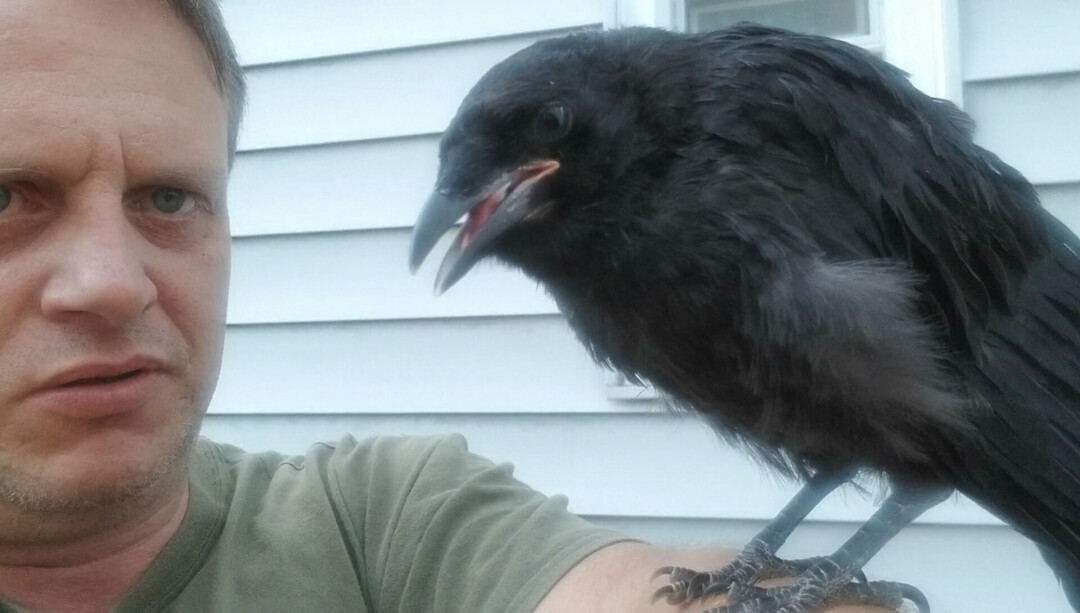 A completely surprising event gave new life to an old story. A couple of years ago I interviewed Tara Smith at Wildwood Rehabilitation and wrote a story in the Reader. She manages this nonprofit business that helps a variety of local injured and orphaned wild animals ready for a successful return to their natural habitats.

One of the most common animals they rehab are birds. Tara mentioned how they try not to give the birds (or any other wild animal) too much human contact, or it will be harder to make them wild again.
I love animals but I didn’t have much experience with wild animals and almost no experience with birds. That changed suddenly one day in the early summer.

One day I was outside and a small crow was on a railing in my backyard. I got closer to it and was surprised when it did not fly off. It looked at me and was crying. Soon me, my roommate and his son were setting up water dishes for him and finding something for him to eat.

We found out later it was a young bird and maybe what an expert would call a fledgling. Maybe he got trapped in our yard and couldn’t get out. Maybe he was injured. He would fly short distances around the backyard for a few days and sleep in a nearby tree at night.

For someone who never had a bird before I didn’t realize how friendly a bird could be. For those few days he was like a dog with feathers. He would get in my hand and get up on my shoulder like it was nothing. I would pour seeds down his beak and he would make this gurgling noise. He cuddled with me and picked stuff out of my hair. You can Google “Duluth rescue crow” and probably find my video of Alfred the Crow (though we didn’t really know his/her gender.) I sound a little silly in the video baby talking with the bird, but this was one of the most amazing things that happened to me in a long time.

Tara might have not recommended being so friendly with the crow, but at that point, we were the only family he had. I actually thought about calling Wildwood. We never attempted to cage him. He was always able to fly away anytime he wished.

As time went on he seemed to get as high as he could get on the house and pointed himself into the wind. As the wind flowed across his spread wings, it seemed like he was getting ready to plunge into the great sea above and rejoin the very social and intelligent community of crows.

One day he was gone. I walk my dog often in the neighborhood and thought I may have seen him at times. I would sometimes see a crow that was about the right size and had feathers that seemed ruffled in the same way. This crow also seemed to be alone more often and when I approached he seemed to hang around longer and not fly off as quickly as the other crows.

For awhile I also thought I could hear that he made a particular crow sound, that sounded kind of more like a human. But, maybe all the young crows sound like that.

Whether I really saw Alfred, observing the crows is in an interesting thing. Scientists say crows are one of the most intelligent animals. They have their own sort-of language. They are known to have a certain call to announce the presence of a hungry cat. They can actually recognize specific people’s faces and warn other crows of who is friendly and who is an a—hole.

I saw how a group of crows would make the rounds to different perches in the neighborhood. I noticed they often caw three times and another group will caw back four times. They are happy feeding on the grass with their squirrel friends nearby, but they fight with pigeons and seagulls for territory.

This experience gave a greater appreciation for what Wildwood does and to understand the joys of helping wild animals with the intention of letting them go. It is a different experience than having a pet.

I hope hearing this story makes you want to volunteer at Wildwood. I haven’t done it yet but might do it sometime. One really busy time is in the spring when they need lots of people to feed baby birds.

They rescue and  release lots of other animals. They are their also if you find an orphaned or injured animal and need some advice. You can call them at 218.491.3604.