The dark side of boxing 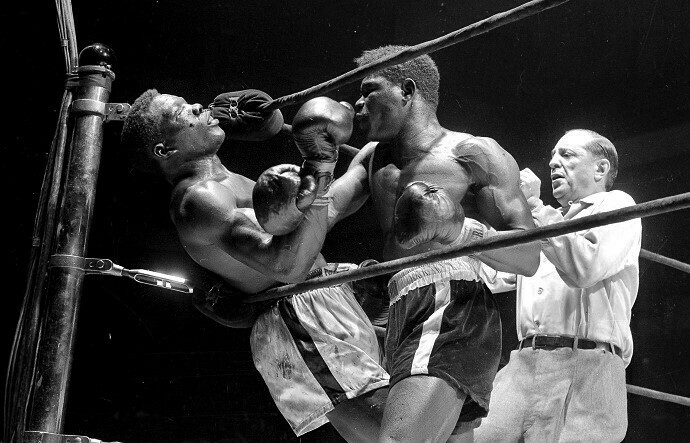 Synchronicity is such a beautiful thing, especially when it seems to be a random act.

For example, a few nights ago I decided to treat myself to a double feature among the 16 films in the Criterion Channel collection In the Ring: Boxing On Screen.

Man, sometimes you just get lucky.

I was tempted to start at the beginning with Alfred Hitchcock’s 1927 silent film The Ring. But I could hear a couple of favorites calling my name, including Robert Wise’s great The Set-Up, starring Robert Ryan as a pug whose manager doesn’t bother to tell him he’s taken money for him to take a dive, and John Huston’s 1972 Fat City, starring Stacy Keach as a skid row wino/boxer.

But, ultimately, I decided to kick things off with what was Humphrey Bogart’s last film role, as sportswriter turned boxing press agent in Mark Robson’s 1956 The Harder They Fall (in 1949 Robson had directed Kirk Douglas in the noir boxing movie Champion, which is also in this collection).

Bogart was dying of esophagal cancer as this film was being made, yet in his first scene, he’s smoking a cigarette. There are tales of extra takes to hide the pain he was experiencing. The only thing you can’t help noticing is how the very good looking toupee does not match his real hair showing at the back of his head.

The story seems to be loosely based on the real-life career of mob-connected Italian “giant” Primo Carnera, who held the World Heavyweight title for a year beginning in June 1933. At 72 knockouts, he holds the record for knockouts by a heavyweight champ, but there were always accusations that all the knockouts were not legitimate.

Time magazine did a cover story on Carnera in 1931, calling him The Monster, and wrote this: “His first opponents – Big Boy Peterson, Elzear Rioux, Cowboy Owens – were known to be incompetent but their feeble opposition to Carnera suggested that they had been bribed to lose. Suspicion concerning the Monster’s abilities became almost universal when another adversary, Bombo Chevalier, stated that one of his own seconds had threatened to kill him unless he lost to Carnera.”

In a Feb. 1933 fight, just a few months before he became heavyweight champ, Carnera faced Ernie Schaff, who had been badly beaten by future heavyweight champ Max Baer months before, and, it was later determined, was suffering from meningitis-induced brain swelling when he faced Carnera and was knocked out in the 13th round. He died four days later.

Despite having a kidney removed in 1938 due to diabetes, Carnera continued to box until 1944, and the next year entered the world of professional wrestling.

Just weeks after the May 9, 1956, release of The Harder They Fall, Carnera filed a $1.5 million lawsuit against Columbia Studios, claiming the big Argentinian dummy Toro Moreno was based on his own career, and as such he felt ridiculed by the premise that he won his title illegally.

Carnera lost the lawsuit, but it seems pretty certain that the movie, and its source material, Budd Schulberg’s 1947 novel, used Carnera’s career as the template for the story of a manufactured heavyweight contender.

The Harder They Fall has Bogie playing Eddie Willis, a top sportswriter without a job since his newspaper folded. Willis is hired by corrupt boxing promoter Nick Benko (the always excited Rod Steiger) to promote El Toro (Mike Lane), an Argentinian giant who, after Bogie sees him spar for the first time announces that the guy is a muscle-bound stiff with a powderpuff punch and glass jaw. But the money is too good for him to pass up.

Willis tells Benko that folks in New York are too smart for El Toro to begin his career there. Where do we go, Benko asks.

Like Carnera, El Toro towers over his opponents and outweighs them all by 60 to 70 pounds.

All the fights are fixed, and after 25 “knockout” wins and Willis’s whiz bang press agentry, El Toro is facing the former heavyweight champ for a chance to face the champ – who, in an ironic twist, is played by Max Baer (perhaps another reason Carnera should have had a case against the filmmakers?).

El Toro wins the fight and the ex-champ dies, just as happened with Carnera. But the current champ wants the credit for “murdering” the ex-champ in their last match, and plans to do the same to El Toro when they meet.

Bogey’s character eventually breaks from the mobsters and frees El Toro while promising to bring Steiger and his fellow fight fixers down with a series of stories exposing their corruption.

It’s a great movie and a fitting cap to Bogart’s career. I also enjoy it because Jan Sterling, one of my favorite actresses of the 1950s, plays Bogie’s steadfast wife. She doesn’t have a lot to do here, but if you want to see her at the top of her game, check her out in Billy Wilder’s Ace In the Hole.

By the time it had ended, I had already decided to make it a double feature with the last film in the collection, a documentary from 2005 called Ring of Fire: The Emile Griffith Story.

I’m not a sports fan, so I did not know the name Emile Griffith and had no idea what I was getting into.

Wow! Unbelievable. It’s the same boxing death story, with another fighter taking claim for beating the opponent to jelly before the fateful night of March 24, 1962 when Emile Griffith pounded Benny “Kid” Paret into a coma and, 10 days later, death.

But there is a bigger story to this. Remember, this is 1962. Emile Griffith, originally from the Virgin Islands, was a talented and fearsome welterweight fighter who also happened to be gay. Before he got into professional boxing, he was designing women’s hats.

Homosexuality and sports did not compute in 1962. As journalist Neal Gabler says in the film, at that time, the two words homosexual athlete were oxymoronic.

In the documentary we learn that although the boxing world knew Griffith was gay, no one mentioned it, except Paret, who in advance of their matchup, began taunting Griffith with the word “maracon,”

And as Griffith says in the documentary, “He called me a faggot and I wasn’t nobody’s faggot.”

Griffith’s fierce attack on Paret before he goes down, limp, is unlike anything I have ever seen in the ring. The ref, Ruby Goldstein, was later criticized for not stopping the fight, but the flurry of furious blows happens so fast it would have been hard to stop Griffith.

Paret dies 10 days later. New York state begins an investigation into boxing, with at least one legislator leading the charge for abolishment of the “savage” sport. The match was televised nationally, but advertisers dropped boxing after that, and so did the networks.

And then we meet another boxer by the name of Gene Fullmer, who faced Paret in a match 100 days before Griffith and admits he beat Paret to a pulp. Paret complained of headaches after the fight with Fullmer.

Another commentator mentions that Paret had been brutalized in his previous five fights before Griffith and was “a broken down racehorse” who should not have been in the ring that night.

“The brain is not made to get hit.” columnist Jimmy Breslin says in the documentary.

Some blame Paret’s manager Manuel Alfaro for mismanagement and preferring profit to Paret’s health. Paret had told Aflaro he wasn’t feeling 100 percent and maybe the fight with Griffith should be postponed, but Alfaro said too much money was already tied up to stop it now.

It didn’t help that after Paret’s death Alfaro said, “Now I have to go find a new boy.” That’s exactly the attitude of Nick Benko toward his fighters in The Harder They Fall.

I was shocked at the similarities between the documentary and the fact-based fiction film I had watched before.

But there is more to The Emile Griffith Story.

Paret’s death, of course haunted him, but Griffith continued to box. However, it changed his style. Before he had been known for delivering knockout blows to opponents. He didn’t do that any longer.

For the documentary, Griffith has an emotionally healing meeting with Paret’s son and namesake, Benny Paret Jr., who was just a toddler when his dad died and is 42 when he meets Griffith. It’s a meeting both men needed.