A week of musical excursions 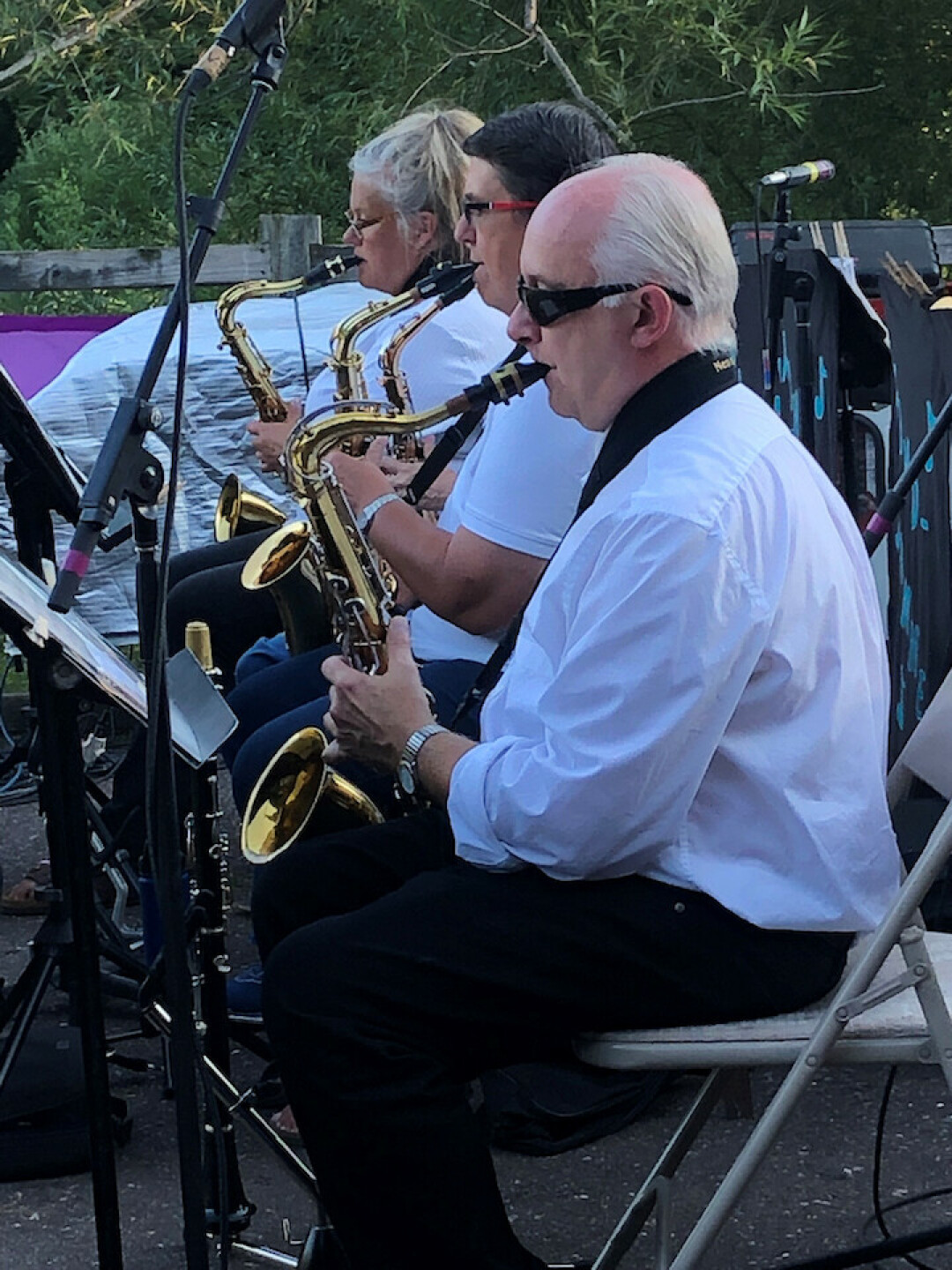 This past week was a time for musical excursions – both genre-wise and geographically. But before describing those, I want to note that the group I call “the Buskers” and reported on a couple weeks ago are back in town! And I got (some of) their names along with the opportunity to hear them again.

They are Isaak Henson on dobro guitar and banjo, Roman John on washtub bass and Jimbo Lockart on percussion, who took the place of the banjo player I first saw them with at the Duluth Farmers Market.

These fellows have a wonderful repertoire of old-timey songs that sound great in an acoustic situation. Both Isaak’s gritty interpretations and Roman’s woeful, wailing vocals do total justice to the lyrics of these traditional tunes.

In addition, they master the requisite harmonies to fill out the three-person sound. If you are lucky, maybe you’ve seen them along the Lakewalk in the past couple of weeks or will catch them before they leave us for warmer climes.

On Tuesday, Aug. 23, I made a point of attending the last of this season’s Chester Creek Concert series with the Windjammers under the leadership of Greg Kriske. It was a rain date concert postponed from July 26, and you could tell that the 14-piece “big band” was ready to swing.

And swing they did with a full brass sound covering a long list of favorites from the 1920s, ’30s and ’40s.

The musicians presented 25 classic tunes made for couples dancing (the Windjammers have been virtually adopted by the Twin Ports Dance group). Among them were, “Sentimental Journey,” “It Would Be So Nice,” “April in Paris,” “Girl From Ipanema,” “Tuxedo Junction” and “Puttin’ on the Ritz.”

Kriske and Mark Dobosenzki provided vocals on a few – “Ain’t That A Kick In The Head” and “You Can’t Take That Away From Me,” respectively. The only thing missing that evening was a sultry songstress crooning the lyrics to some of the other numbers.

Many members of the band have played together for 30-some years back to when they switched to big band orchestrations from their polka band origins. The Windjammers entertain the seniors at the St. Ann’s residence twice a year and periodically perform at Ecumen Lakeshore. In the past they have played during the Duluth Public Library’s summer concert series.

It would be nice to report when and where you might catch them in the near future, but nothing is scheduled at this point. 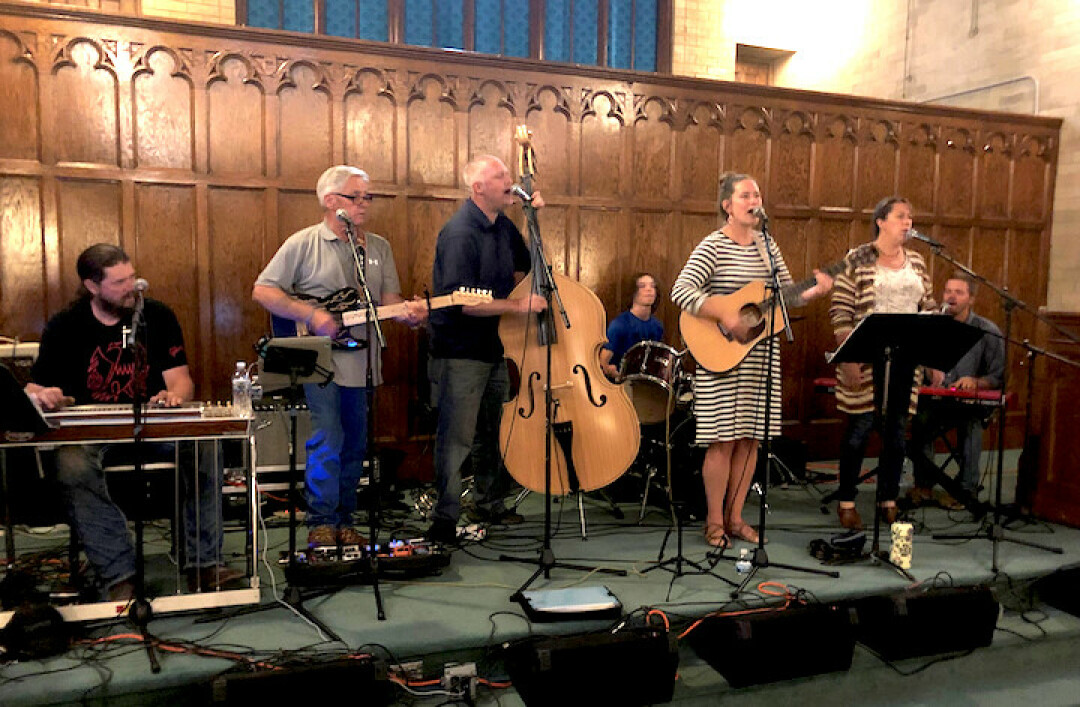 It was onto the gospel sounds of the Holy Hootenanners the next day, Aug. 24, at the United Protestant Church in Morgan Park. This is an amorphous group, based in Mahtowa, that at times has up to 12 members.

The concert was sponsored by Susan Coen State Farm Insurance as a benefit to raise funds for repairs to the church tower.

An indoor venue was a good place to be on that dark and drizzly evening and a good time to hear an hour and a half of uplifting music.

One of my favorite gospel tunes is Hank Williams’ “I Saw the Light,” which the Hootenanners performed with great spirit. They covered many good old traditional numbers such as “A Closer Walk With Thee,” “Mary Don’t You Weep,” “Green Pastures” and “I’ll Fly Away.”

Then there were some wonderful original songs – “Heaven” by Anderson and “In Everything” by Sokola. They did a great New Orleans-style rendition of “Down By The Riverside,” which highlighted Jeff Gilbertson on trombone and then mixed it up with soul-gospel version of “Yes We Can Can” for an encore.

The only downside of this concert was the acoustics of the church that muddied the lyrics of these songs, which is too bad, because the harmonies were superb and the set list impressive.

A trip to the Minnesota State Fair on Thursday, Aug. 25, was my attempt to catch a show by Rich Mattson and the Northstars, who have played at Earth Rider more than once this summer. Unfortunately, the chartered bus I took with fellow fairgoers departed for home before they took the stage.

However, I got to enjoy two other bands that afternoon: Good Morning Bedlam and Mark Joseph & The American Soul.

Good Morning Bedlam is known for its “furious folk” music and energetic performances. With standup bass, fiddle, trumpet and drums and the fiery antics of the red-haired crew, it was hard to sit still and just listen. I see they play all around southern Minnesota and Wisconsin as well as farther afield in the Midwest, so I will seek them out for a longer listen in the future. 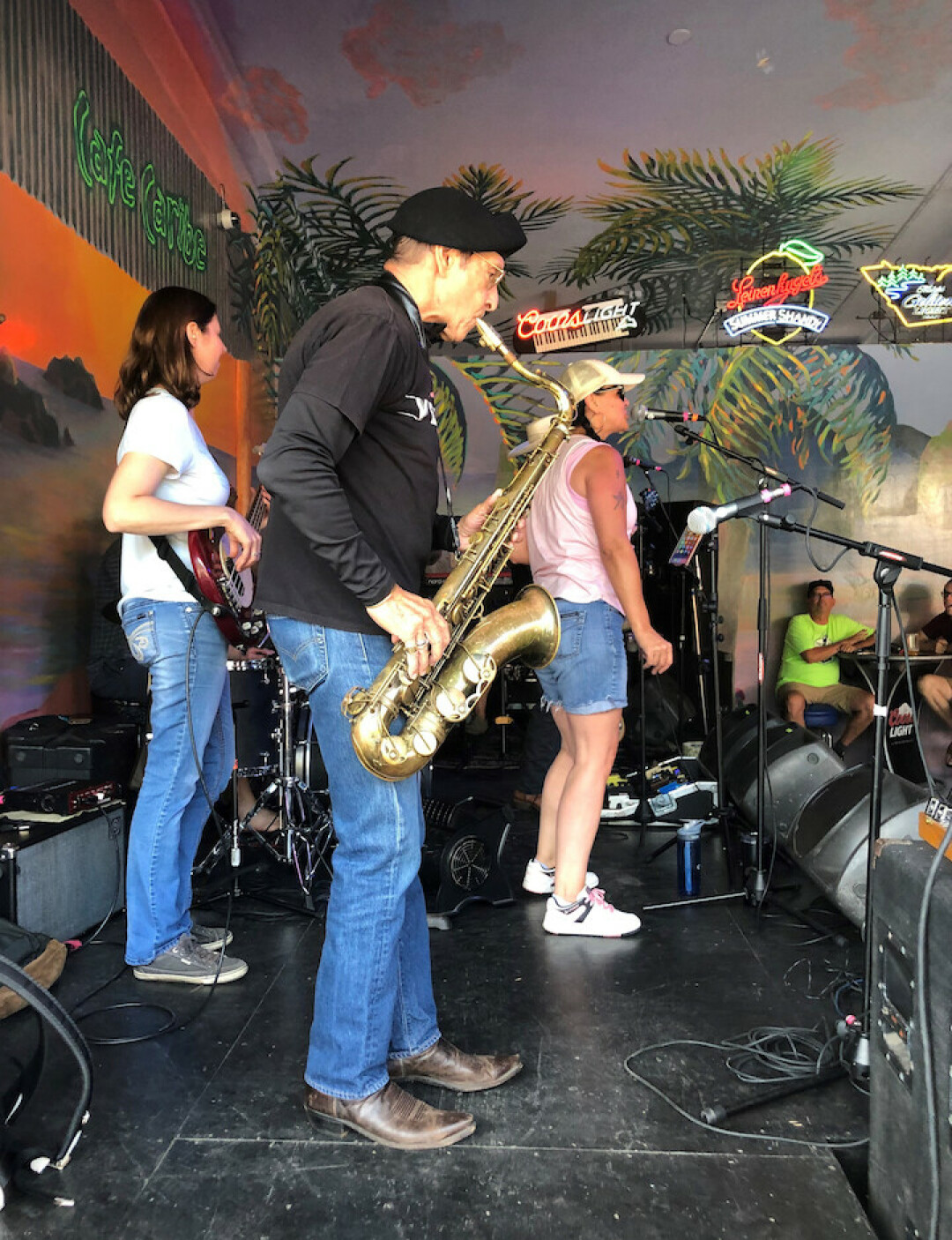 Mark Joseph & The American Soul at the Minnesota State Fair on Thursday, Aug. 25

The music of American Soul was likewise rockin’ and danceable. On this afternoon the band featured a blues harpist/saxophonist, Stanley (last name unknown), from Los Angeles. I could have listened and danced to their bluesy numbers all evening given half a chance, but there again, the bus schedule interfered. I’ll keep this band on my radar! 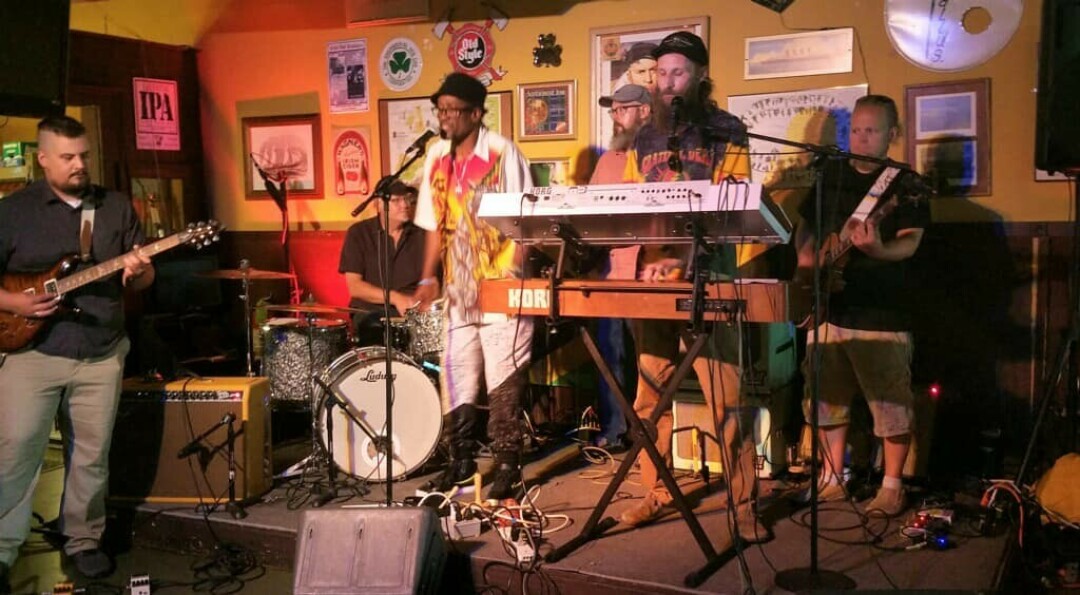 The reggae band Prince Paul & The Conscious Party performed at the Caddy Shack in Lincoln Park on Friday night, Aug. 26. The eponymously named band has Prince Paul as its lead vocalist with other members providing harmonies. Rick Bruner on drums provided a driving reggae beat that, together with Gordon Lewis’s bass licks, made for fun dancing. Joe Hauge and Sven Berg (electric guitars) and Rob Jones (keyboards) contributed nicely to the groove as well.

On this evening they were joined by Aaron Benson (congas, djembe) to enhance the reggae rhythm.
The band got started a little late, but as Prince Paul announced, “good things come to those who wait.”

The first number was actually just a jam without vocals to warm up; it was an engaging start to the evening. Next up was “Stir It Up,” the Bob Marley hit that lets one know what lies in store for the evening. “Legalize It” by Peter Tosh and “Tenement Yard” by Jacob Miller explored the alternative lifestyle in which dreadlocks and ganja abound.

What amazes me is how little following there seems to be for reggae music here in the Twin Ports, based on the small turnout this evening.

To wrap up this week of musical excursions, I traveled south to Mahtowa on Saturday, Aug. 27, to check out the music venue at the Rugged Spruce Golf Course.

This new venue – the Long Iron Stage – opened this summer by the golf course’s new owners, Colleen Myhre (AKA Boss Mama) and her husband Jim. They had quite the lineup of local musicians these past couple months. 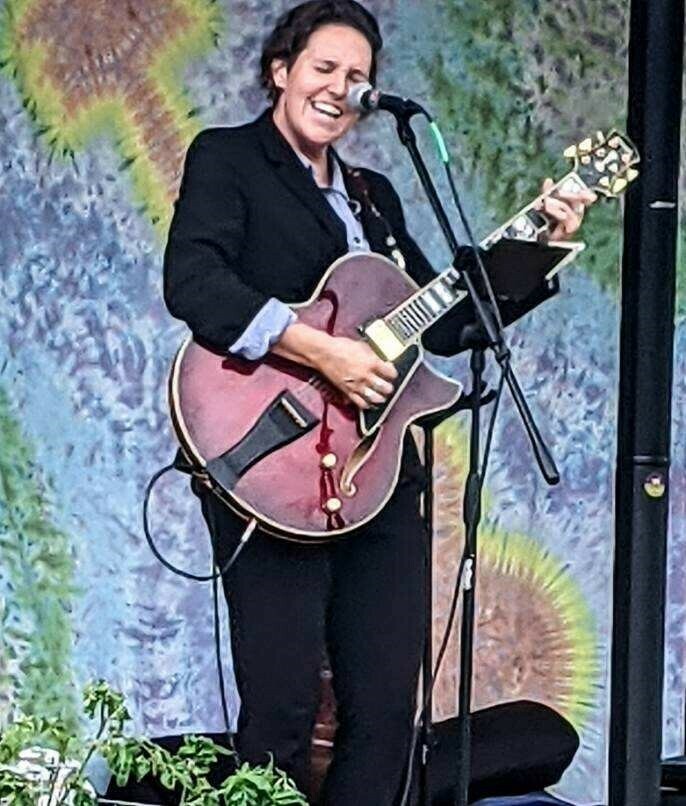 Skarlett Woods was playing on this evening and what a joy to finally clearly hear her. (I had previously seen her perform at Sacred Heart, Sir Ben’s and the Spirit Room at Fitger’s where poor acoustics and ambient sounds diminished my appreciation.)

Woods sings both original tunes and covers, including the ever-popular number, “Yesterday.” Her version of “Have You Ever Seen The Rain?” showcases her beautiful and versatile voice with its nice vocal breaks, while a jazzy rendition of “You Are My Sunshine” was innovative.

As the second-place winner in this spring’s Dylan Singer-Songwriter contest during the Duluth Dylan Fest, she has a fairly lengthy list of original tunes that she intersperses with the covers. These numbers tend to be more complicated both musically and lyrically and are less memorable. We are certain to have more opportunities to see her around these parts, so keep a lookout.

As my foray into local music takes me farther afield, I’ll be sharing more finds in the weeks to come. Stay tuned!