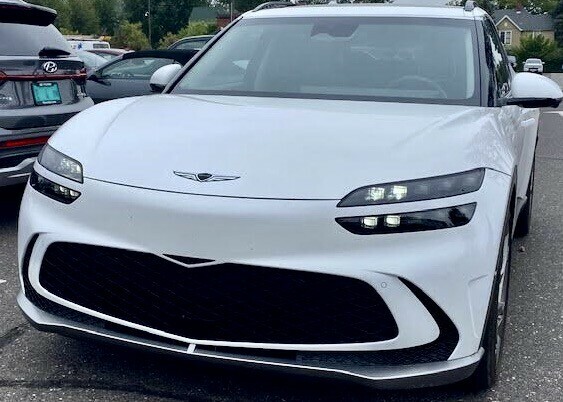 There is an exotic quality to the Genesis GV60, and not just because it is the first pure-electric model from the South Korean luxury brand from Hyundai’s upscale outlet. But for just sheer looks, the Genesis GV60 “Performance” model has an alluring look of sleek and shapely style and the obvious promise of high-performance.

My guess is that we’ll all be driving electric vehicles, or EVs, sooner rather than later. We might buy a hybrid as a stopgap from our gas-engined models to an all-out EV, but it’s coming.
Oh sure, there are skeptics out there, but mainly those who have never ridden in or driven an EV, or, in some regions, they become talk-radio hosts and spew hours of completely unfounded opinions about why EVs make no sense.
I’ve driven EVs before, so I was looking forward to the EV model from Genesis, and when one was delivered by being driven from Chicago to my Duluth residence, that alone was impressive.
The driver made it from Chicago to Tomah, Wis., and then to Duluth, because the GV60 has a range of nearly 300 miles between charges, and it has a magical fast-charge system that allows you to fully charge its 77.4 kilowatt-hour battery in about three hours.
If you’re in a hurry, you can gain about 75-percent full charge in, like, 20 minutes with the fast charger.
I have to admit, I was pretty mesmerized by the glistening Uyumi White Genesis and all the gimmicks and gadgetry that allow you to get ready to go.
For example, you lean over and look into the tinted rear side window, and you’ll see a distinctive little circle. Look into it, and you have just inscribed yourself into the car’s face-recognition system, which causes the four doors to unlock and the four door handles to angle outwardly so you can easily grasp and pull on them to open the door.

Climb inside and nestle down into the comfortable and luxurious leather seats, and then look at the console. There is a round half-sphere that resembles one of those old things your grandma used to have, where you shake it up and a blizzard ensues inside.
Ahead of that unidentifiable half-sphere there is another circle that glows at you. Spend a moment touching it with your index finger, straight on, top, left side and right side, and you have just coded yourself into the car’s memory with fingerprint authorization.
Maybe it seems overdone to use face-recognition to get in the car and fingerprint authorization to be able to start the keyless ignition, but look at it this way: Nobody else can ever steal your car!
Push the start button, and check the extensive and variable instruments that let you know you are ready to go. It lets you know because that little half-sphere on the console rotates to convert into a gearshifter. Rotate it to the right and you’re in drive.
Of course, there also is silence. The first time I drove the car, I was in something of a hurry to get to my thrice-weekly rehab appointment, so I didn’t fiddle with installing my favored audio presets. That meant I drove downtown in nothing but eerie silence.
Electric vehicles are always impressive to drive, and the Genesis comes in two more-basic models, with one electric motor driving the rear drive wheels. The GV60 Performance, however, has two 160 kilowatt-hour electric motors, one in front for the front wheels and the other in the rear for the rear wheels. That adds up to all-wheel drive, of course, an added luxury for winter-region drivers.

Those motors work in perfect synchronization to create 429 horsepower, and 426 foot-pounds of torque as a tandem. There also is a little button on the steering wheel that says “Boost,” and if you push it while in motion, your 429 horsepower turns into something like 480 horsepower. That allows you to pretty well dust off your neighbor’s Corvette or hot Mustang, and he won’t know what hit him.

The sleek roofline contains a full-length sunroof with an interior power-operated shade. There also is a large storage area under the hatch of the 4-door hatchback.
In front, the headlights are an array of mighty little LED lights that look distinctive and also turn the roadway into something resembling daylight.
We had a very entertaining time driving the Genesis GV60 Performance u and down the steep hills of Duluth, and I was most looking forward to the challenge of carrying my wife, Joan, and me from Duluth to a meeting in St. Paul and back home in the same day. We’d need about 400 miles of range for that, which led me to a serious bout of range anxiety – something that is a valid concern for every EV buyer and a source of sarcasm for those doubters.

I had a few days before our weekend trip, so I checked with a few places down there and learned there were a lot of free charging stations, so it wouldn’t be a problem.
Next, I figured I’d get the Genesis fully charged the night before we would be leaving. I plugged it into our household electric outlet, and plugged in the onboard charging device into the car. After charging all night, it was woefully long and inefficient to do it that way, and I only added 30 miles to my depleted range.

We located an obscure outlet near Knife River, and I took their charging device and plugged it into the car’s right side receptacle. Problem was, we were pretty struck out there, so I decided we should head back for Duluth. We were told there are several agencies that are installing charging stations, and if you go to your iPhone apps, you can install one of them and then, by flashing it across the scanner on the charging device, you can get a high-speed charge. We tried that, but several attempts failed to allow me to get the app installed. Joan had better luck.

Then came the kicker. The nozzle would not unhook from the receptacle in the car, no matter what we did. We tried everything, for most of an hour, including scouring every word about charging in the owner’s manual.
Finally, we started hitting buttons on the large info screen, and I went to vehicle, then several others in a sequence of drop-downs before I finally spotted one that said charging. I clicked on it, and a screen came up that asked if I wanted the charge thingie to automatically lock, or not. “Not,” I clicked, and sure enough, the nozzle came right out.

We went to a row of charging meters located down near Canal Park, and I had been advised that on either end of the row, there were two high-speed chargers. We hooked up to one, but couldn’t connect. Joan tried her app, and we got it going!
Joan had followed me in a second car, so we left the Genesis sitting there connected to the charger and went off to get some late dinner, knowing that when we came back, we would have a full charge to head for St. Paul the next morning.
Wrong!  When we got back to the meters, ours said “err,” as in error. The thing had disconnected itself, apparently because we hadn’t put in a credit card number that would charge us a fair amount for every minute charging.
One of the problems with these charging agencies is that some will give you free charging, others will charge you, and in Duluth, they apparently don’t want anybody to get away without being nailed for some revenue.
It was late, so we unplugged – after once again going through the series of dropdowns to find the proper “unlock” command – and went home to sleep.
In the morning, because we had no idea if our new app would work – in Duluth or St. Paul – so we left our gleaming white steed in our driveway and took another vehicle to St. Paul.
Our biggest problem is that nobody instructed us on how to get the app, and none of the onboard information devices gave us any information at all. It had taken us half the week to figure out about the app, and now I’m eager to drive another EV and see what we can do with an entire week of proper operation.

Of course, if you were spending an estimated $75,000 for the GV60 Performance, you certainly would install a rapid-high-powered charging unit at your home, so you could fill the battery to capacity whenever you wanted, and greatly eliminate any range anxiety.
The GV60 Performance model is a 2023, and it’s so new the actual price has not been determined, but since the “regular” GV60 ranges up to $60,000, that’s without any electrification or even hybrid assistance. So my guess is $75,000, and throw in that home charger.
There are charging stations sprouting up all over the country, and there is an Interstate 35 corridor from Minneapolis-St. Paul up to Duluth and the North Shore of Lake Superior, with charging stations at Forest Lake, Pine City, Hinckley and Moose Lake, all near restaurants.
It seems that only in Duluth you might find you need the special app and charge card just to be able to be charged ransom for a dose of electricity. Still, it’s cheaper than gasoline, and it pollutes absolutely nothing, as you zip silently around your appointed rounds.