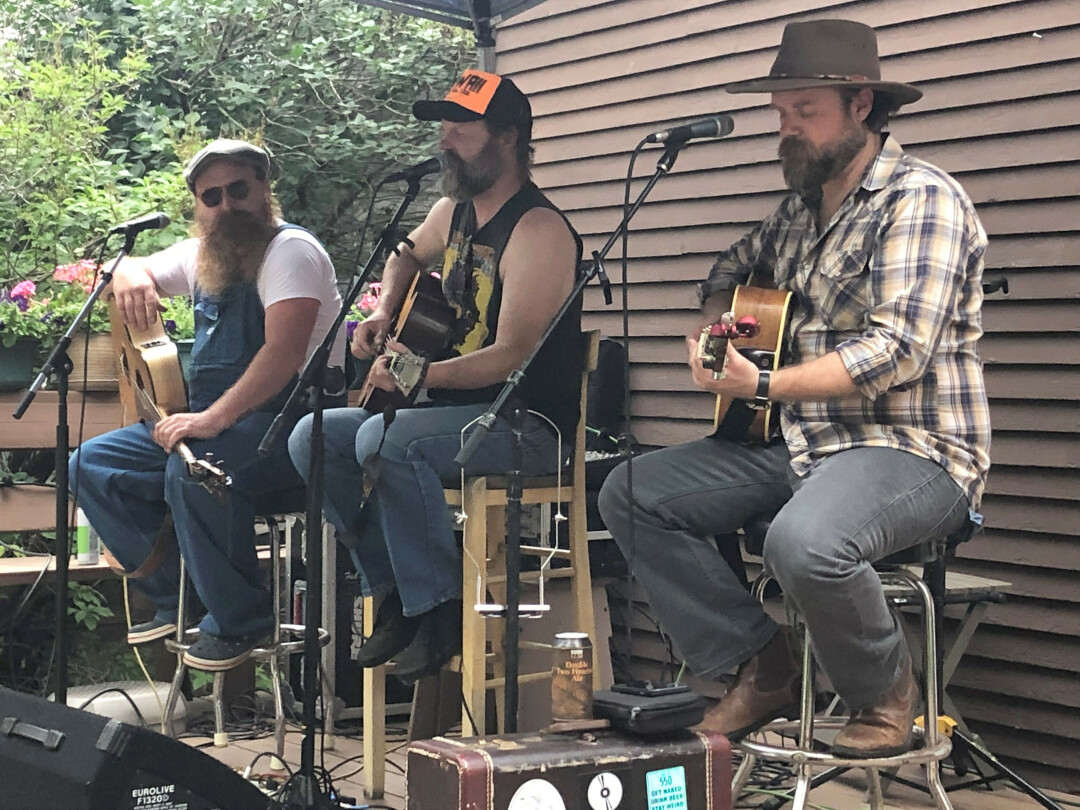 After a full three days of the 33rd Annual Bayfront Blues Festival, it was a relief to attend a private party on Thursday, Aug. 18, where I could simply relax and enjoy the performance of three talented singer-songwriters: Misisipi Mike Wolf, Matt Sayles and Willy Tea Taylor, whose paths intertwined out west during the past decade.

I’ve written about Mike previously and have heard Matt on several occasions, but Willy was a visitor to our area who I hadn’t previously heard.

Willy, who played a tenor guitar, is a traveling man, most recently stationed in Battlecreek, Michigan.

That afternoon the three did not play as a trio, except on a couple numbers.

Rather, Mike and Matt on acoustic guitars and who have joined forces before, shared the stage with Willy, each taking a turn to play original numbers.

Mike led off the concert with his rollicking tune, “Guitar Roy,” that demonstrated his acoustic chops and gave a nod to Chuck Berry’s “Johnny Be Good.”

Willy went next with a heartfelt tribute to his friend the actor, director and writer Sam Shepard, “Here’s To Sam.”

Shepard’s diagnosis of ALS and subsequent death in 2017 served as the impetus for this song.

When it was Matt’s turn, he described his tune, “Black Oil,” as historical fiction, history being a source he has mined before in his original songs. Several of these are on his excellent 2016 CD, Ghost of the Damned.

Mike typically played backup for Matt throughout and vice versa. A few songs later, Matt played harmonica on “Cathedral of Indifference” which had a haunting melody and a wonderful line, “slipping through the sands of time.”

He also sang “What Went Wrong?,” “Life Gets In The Way” and ended the show with a cover of “The Ballad of Me and Sweet Marie” by the Lewi Longmire band.

The guys did not follow a defined set list but chose songs that were topically related to what was played before. For instance, when Willy played a tune, “Circumcision” that he claimed was the first he ever wrote (as a newborn!), with its focus on his little willy, Mike followed it up with “Tattoo” in which a tattoo of a $100 bill on his “manhood” was featured, much to the amusement of the audience.

Other original numbers performed by Misisipi Mike that afternoon included “One More Thing,” “Places To Be” and, being well known to this audience, he was requested to play “Number Two,” another humorous, if lovesick, tune.

One of Willy’s most memorable songs, “Molly Rose” had quite dark lyrics, while “Nurse” was a sentimental ballad about those who care for us when we are ill. Then he turned it around with the upbeat “’69 Malibu.”

Rain ended the outdoor performance before a full second set was played, but the audience went away happy.

I lingered to speak with Matt and Willy and ended up receiving a CD from each. Matt’s was a “pre-release copy” of American Fork Standards (pun intended) by The Driftless Revelers, of which Matt is one.

Are you a fan of that old Canadian TV show Red Green? If so, this CD is right up your alley. You can just picture these three Wisconsin musicians (Matt, Ben Nelson and Jerod Kaszynski) sitting around drinking beer and coming up with the tunes and lyrics for this silly, ridiculous and raunchy set of songs that make up this album. As their Facebook page states: the band “revels in the timeless ephemera of weird old-time American music.”

Be forewarned, banjo is featured, along with dobro guitar, standup bass and even a kazoo to produce an old-timey jug band sound.

I would suggest that sensitive folks skip this album, but if you are hosting a fish fry, a card game or just hanging out with some fun pals, put it on for a laugh. References to local traditions abound as in “Meat Raffle Mambo” and “Wisconsin Saturday Nights.” Another title, “Get Naked Drink Beer” tells you all you need to know. Then there’s “Fishing Hole,” laced with not-so-subtle innuendos in the style of a 1920s ditty. Two cuts, “Dirty Scoundrel Blues” and “I’d Do It For You,” are a bit more serious.

If you want a good dose of fun, be on the lookout for the Duluth release party of this CD anticipated in the next month or so.

The CD Willy gave me, Knuckleball Prime, produced in 2015, couldn’t be more different than American Fork Standards – with lots of sad, bluesy songs about lost love and hope. The lush instrumentals and weepy pedal steel guitar licks reinforce the mood, as on “The Very Best” (at missing you), “Bull Riders & Songwriters” and “Lost In A Song.” The title track and another, “Brand New Game,” use baseball analogies to explore the vagaries of life. “Chickamauga” begins with banjo picking that brings one back to a long-ago war and a “…time that this young boy will die.”

Willy has a comfortable, sometimes gruff tenor voice that effectively conveys a range of emotions. The touching melodies, together with his well-wrought lyrics, makes this a CD one can listen to again and again, when only the blues can make you feel better.

What these two albums, as well as these three amigos, have in common are original tunes and lyrics that deserve a close listen. They will have you either laughing or crying or both.