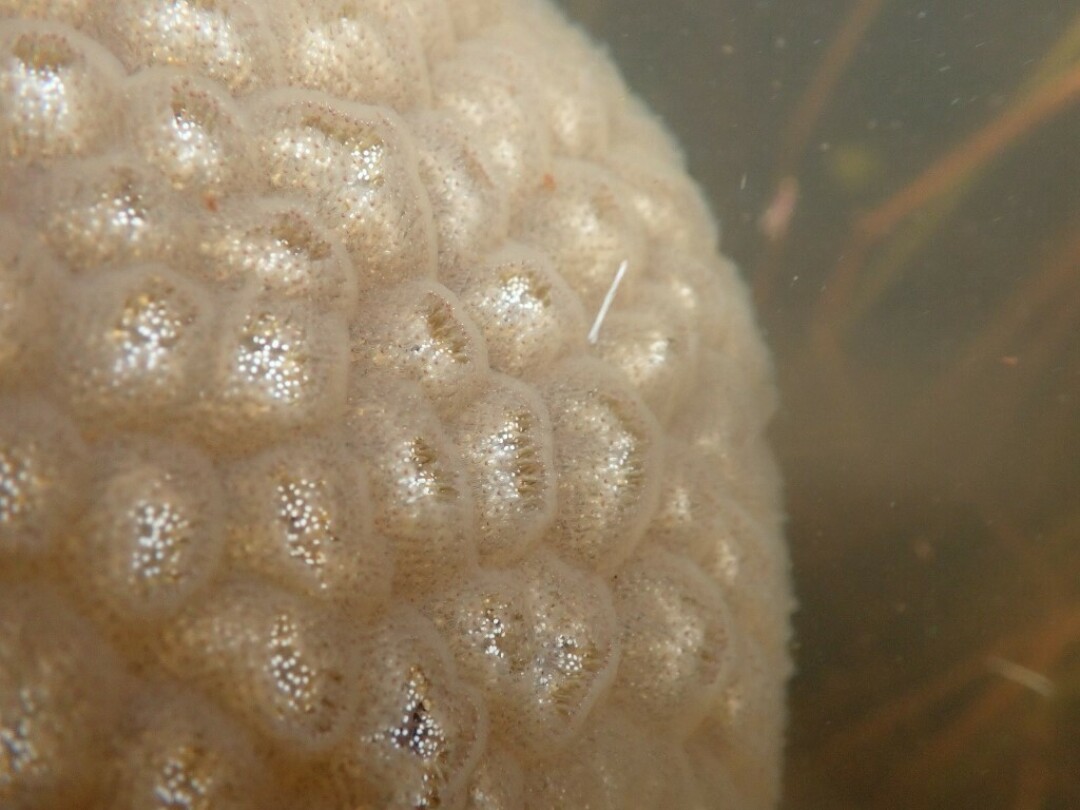 “Hey, I’ve got something over here!” called one of the paddlers on our Aquatic Plant Ecology and Identification field trip last week. He was floating in a sparse patch of wild rice near the edge of Chippewa Lake east of Cable.

“It’s about the size of a soccer ball,” Pat exclaimed, just in case we assumed he had discovered yet another species of pond weed or something.

“Is it gelatinous?” asked our instructor Paul Skawinski, Citizen Lake Monitoring Network Educator with UWSP/Extension Lakes and author of Aquatic Plants of the Upper Midwest, as he began paddling over.
“Looks like it,” responded Pat. Paul already had a good idea of what he would find, and a name popped into my head, too: bryozoan.

Bryozoans are a colony of tiny invertebrates that cling to the stem of an aquatic plant.

The individual invertebrates may be tiny, but this bryozoan was huge! The round, beige mass was at least the size of a soccer ball, and maybe more like a basketball. The surface pattern was a hybrid between those two as well.

A quilted-looking pattern of bumps covered the entire surface with vaguely geometric pattern quite a bit bigger than the pebbles on the basketball, and interlocking like the polygons on a soccer ball.

After dunking my waterproof camera in the lake for some photos, my bow paddler and I backed the canoe away so others could get a good look.

This specimen was far too impressive to touch and risk damaging it, but several years ago I saw one in the Namekagon River while learning to snorkel. The firm-jello-with-a-textured-surface feel of the bryozoan triggered my “gross” reflex just as much as it sparked my “cool” instinct.

I was impressed when the group of teenage girls I was snorkeling with didn’t bat an eye. Showing interest but not disgust, they all had a look before we put the colony back into the river.

While the blob looked more like a patterned glass art piece than a living being, it is actually formed of hundreds of genetically identical, physiologically interconnected animals called zooids. Similar to coral in their colonial lifestyle, each individual zooid is made up of an outer sleeve-like structure that produces a gelatinous exoskeleton; a mass of organs that can move within the sleeve; and the lophophore, which is a ring of tentacles that filters food particles out of the water.

Instead of pooping out waste, a zooid just grows a new sack of organs when the old one fills up.
While each zooid is capable of independent feeding, digestion and reproduction, they share certain fluids and tissues that unify the colony, and it’s impossible to separate them entirely.

Some types of bryozoans also have specialist zooids that produce eggs, defend the colony and attach to the substrate.

Altogether, a zooid may be only 0.5 mm long, so little of this is visible to the unaided eye.

That fall, after the snorkeling expedition, I examined a bryozoan under the museum’s digital microscope. The surface texture resolved into a conglomeration of various-colored polka-dots, often with concentric rings. Nothing looked remotely like the feeding tentacles I’d read about.

I snapped some photos through the scope and sent them off to aquatic ecologist Dr. Toben Lafrancois for clarification.

“They are statoblasts,” he wrote back, “or dormant buds getting ready for winter.”

While bryozoans can reproduce sexually, they also produce these statoblasts, which are sort of like tiny “survival pods” that develop while attached to zooids. Inside each bivalve-like chitin shell hides a proto-zooid with some stored food.

The statoblasts of some species contain a gas bubble that will float them up to the surface. Others drift on a current or just sink to the bottom.

Apparently, the various shades of brown and yellow represent various stages of statoblast development, and their prevalence is a result of the bryozoan’s autumnal push to create clones who can survive the winter.

The bryozoan colony will die as temperatures drop, but statoblasts are incredibly durable and can survive long periods of dormancy, freezing, dehydration and even transport in the gut of a duck or the ballast of a ship.

In the spring, the proto-zooid will grow, bud off more zooids like itself, and form a new colony. By fall, colonies have reached their largest size, and people start to notice them in slightly flowing, nutrient-rich water like the wild rice beds of Chippewa Lake.

After viewing the bryozoan, our field trip on Chippewa Lake switched back to looking at bladderwort, water celery, coontail, and slender naiad. As with many botany expeditions, we barely got out of sight of the parking lot while encountering an impressive array of biodiversity. The stories of those new friends will have to wait for another day!