Cowpunk from the Iron Range 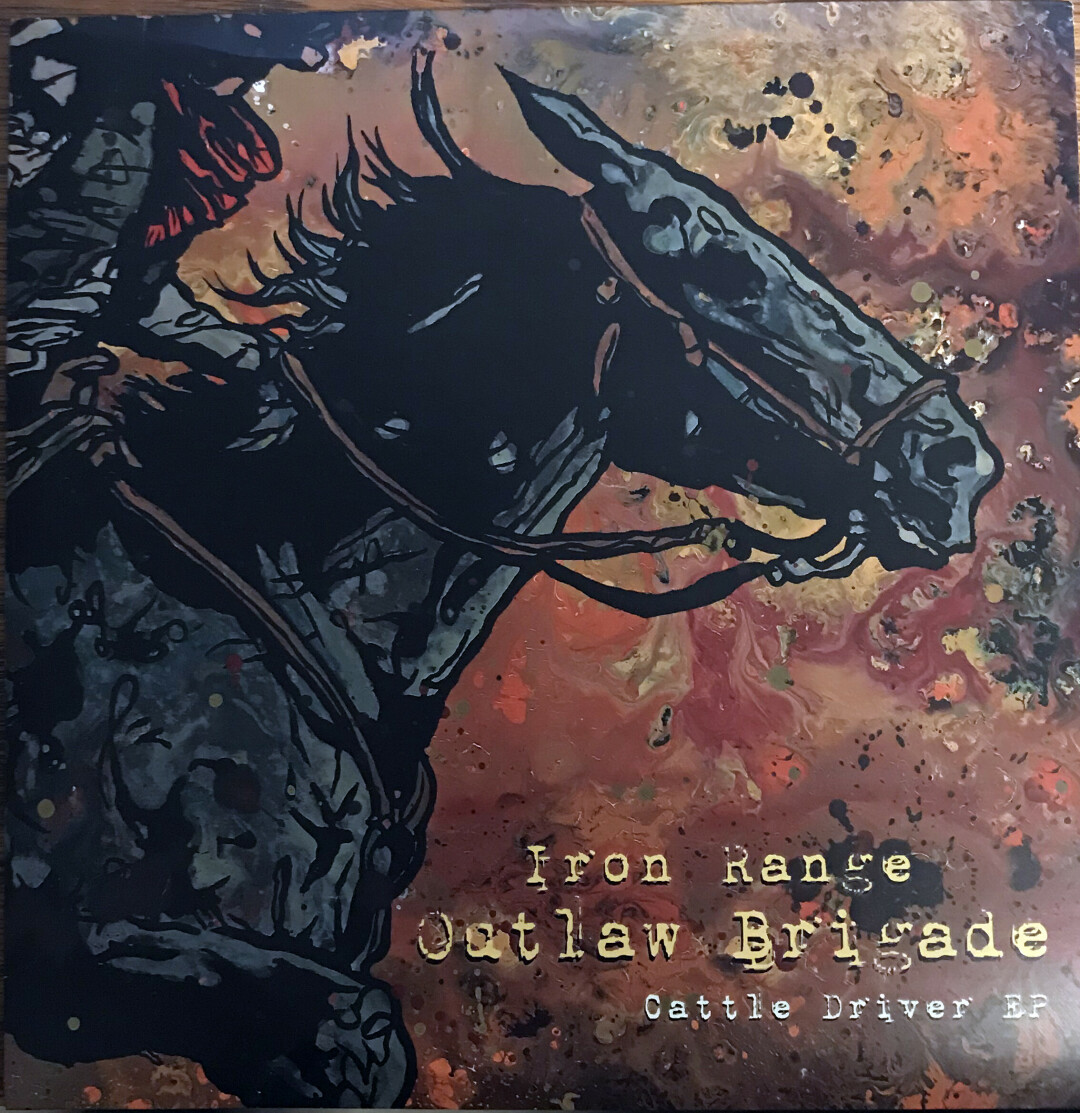 Being a vinyl snob, when a press release arrived from Kirk Kjenaas of the Iron Range Outlaw Brigade about their new Cattle Driver EP on CD, digital download and vinyl, I requested a vinyl copy (and received all three – thanks Kirk!).

When I opened the 45, I had to smile at the brilliant orange disc inside. Great artwork on the cover and disc by western artist Cody Kuehl. The cool artwork on the vinyl was done by Barry Faust.

I was already feeling good about this record before I even dropped the needle on it for the first time.

In addition to Kirk on guitar and vocals, the Iron Range Outlaw Brigade includes John Peterson on pedal steel, trumpet and vocals; Fred Hanson on bass and vocals; and Glen Mattson, drums and voice.

Included with the disc was a handwritten note from Kirk that tells the genesis of this recording.

“On March 1, 2021, this heavy-drinking party animal suffered a near death widowmaker heart attack,” he wrote. “While spending three months recovering, I wrote the songs of the Cattle Driver EP.”

His inspiration for the music included “my mutual love of country and punk rock music, Western movies and hanging out in McLeod, N.D., most notably The Sand Dune Saloon and the McLeod Stampede Rodeo.”

Yeah, you can hear all of that on the four songs, beginning with the rollicking title tune “Cattle Driver,” followed by “Rodeo!” On side two there is “Ride Bastard, Outlaw Ride” and “Coyote.”

A standout for me is any time Peterson chimes in on trumpet and pedal steel.

For sure you can hear echoes of Stan Jones’ 1948 classic “(Ghost) Riders in the Sky: A Cowboy Legend,” just as you can hear Straight to Hell-era Clash coming from this Iron Range band.

I listened to both sides, then flipped it over and listened again. There was just one thing I had to do after that second listen that had me galloping around the house. I had to watch The Blues Brothers, and in particular, I had to hear and see them perform Rawhide from behind the chicken wire at Bob’s Country Bunker. It’s all in the same spirit, and I love it. The song “Rodeo” surely owes a tip of the hat to “Rawhide.”

The recording was made at Rich Mattson’s Sparta Sound – Rich is drummer Glen’s brother.

Kirk pointed out that the new recording can be purchased at the Iron Range Outlaw Brigade bandcamp page, or at live shows.

The band is also offering a boxed set for $50, which includes shipping of the7” vinyl record with digitaldownload card, CD, Coyote t-shirt deigned by Barry Faust, an Outlaw Babe button designed by Steve Danger, two Rodeo! stickers, a Western Mod Podge lighter and a unique box to hold everything.