What is a gunsel? 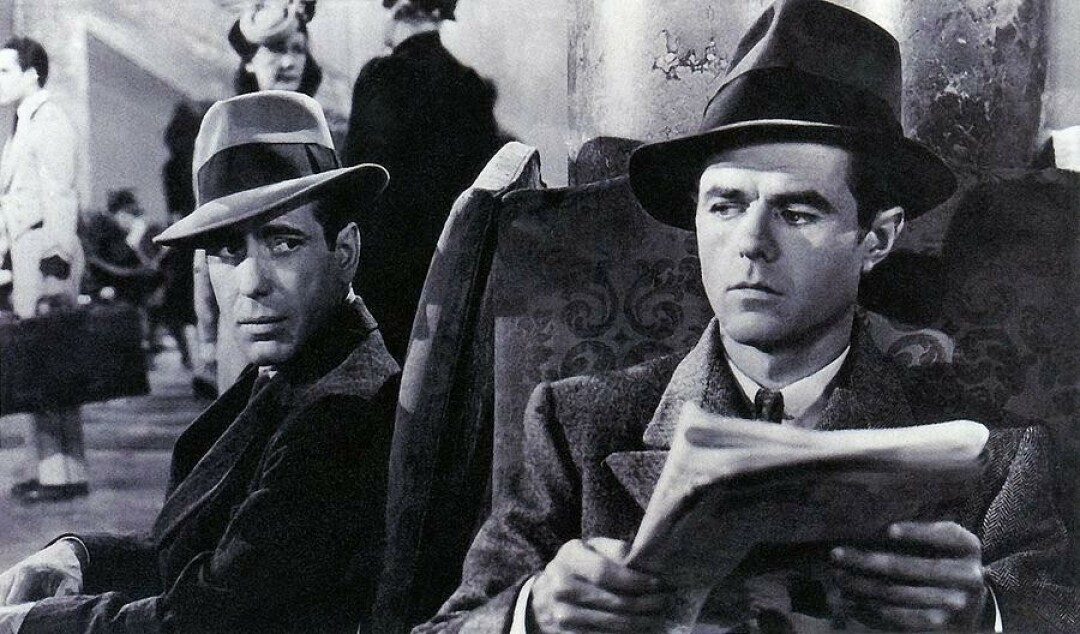 You have to admire Dashiell Hammett for using a corrupted Yiddish word to pull the wool over his jittery editor’s eyes in 1929 when the Black Mask ran the serialized version of his The Maltese Falcon, which would be released as a novel in 1930.

Hammett’s editor objected to his use of the word “catamite” in referring to Casper Gutman’s gunman Wilmer Cook. A catamite is “a boy kept by an older man for homosexual practices.”

Oh, my, we can’t have people reading that.

OK, Hammett said, you don’t like catamite. How about gunsel?

Thinking it was another word for a torpedo or hit man, the editor agreed and, without knowing what the result would be, Hammett singlehandedly brought the word into Hollywood lexicon.

Gunsel is taken from the Yiddish word gendzel, meaning little goose. Somehow, the corrupted form, gunsel, became the term for a young homosexual male in convict and tramp circles.

The Maltese Falcon was filmed three times, with the most famous version being the last, the 1941 John Huston-directed classic starring Humphrey Bogart as private eye Sam Spade.

“Keep that gunsel away from me while you’re making up your mind. I’ll kill him,” Bogie tells Gutman.

Once Bogie referred to Wilmer, played by a very young Elisha Cook, as a cheap gunsel, scriptwriters everywhere perked up their ears and began to use the word gunsel to mean a gunslinging henchman.
That must have made Hammett laugh.

Here a just a few examples I’ve heard with the recycled meaning of the word “gunsel” in movies.

A year after making The Maltese Falcon, Huston and Bogart reunited to make the Across the Pacific, in which a Japanese character played by Victor Sen Yung is referred to as a “Jap gunsel.” Here it definitely means a gun thug.

In the 1947 Bob Hope vehicle My Favorite Brunette, Alan Ladd has a cameo role as a Sam Spade-type character who utters a line about “a couple of hopped up gunsels.”

But to see that the word had really taken hold, we’ll jump ahead to 1971 and the Burt Lancaster western Lawman, in which a character tells Lancaster’s uncompromising quick-draw lawman, “If you were some cheap gunsel with a big name in front of you, they’d be buying you drinks.”

By 1971 there is no mistaking that those using the word believe it refers to a gunfighter.

Dashiell Hammett had been dead a decade by the time Lawman came out, so we can only assume that he would have been happy to see how his editorial deception had resulted in actually changing the meaning of the word to the world at large.

The HBO series Deadwood is the most recent production where I’ve heard the word used to refer to gunfighters.

However, not everyone was willing to let Hammett’s joke pass into the lexicon.

Not sure who decided to set the record straight in the 1943 Lady of Burlesque. Was it hardboiled writer James Gunn, who adapted his screenplay from burlesque performer Gypsy Rose Lee’s 1941 mystery novel The G-String Murders, or two-fisted director William “Wild Bill” Wellman who decided to use “gunsel”as it was intended?

The movie stars Barbara Stanwyck as up-and-coming burlesque star Dixie Daisy (really Gypsy Rose Lee’s character in her novel). A good part of the film takes place in the cramped dressing room of a burlesque theater so we can get to know Dixie and some of her colleagues in the burlesque world.

One of those colleagues is Lolita La Verne (Victoria Faust in her first film role), a snooty diva with pretensions of using her operatic voice to move from burlesque to “legitimate” theater. She has gotten close to gangster Louie “The Grin” Grindero (Gerld Mohr), but is upset with him when cops raid the theater and haul everyone to jail. She’s not happy that Louie didn’t intercede for her early release.

When she berates Louie about it, he says he doesn’t go near cops or jails.

Lolita’s usually high-falutin’ vocal pretensions revert to her true lower class background when she uses the word against Louie with this line: “Big Louie the Grin! Turns grey when he sees a cop, like a gunsel.”
She has just accused Louie of being a panty-waisted pansy, not a gunman.