New Audi A3 rekindles memories — plus, it’s a hybrid 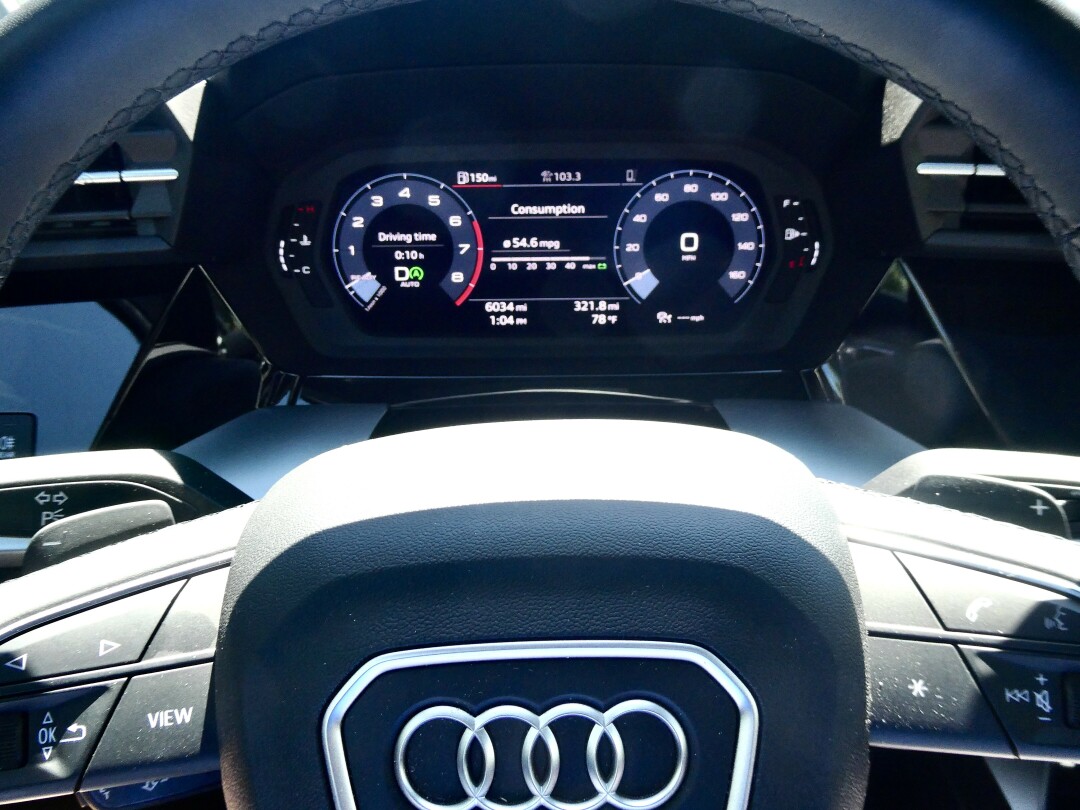 In 1989, my wife, Joan, and I made a now-unbelievable trip to Switzerland and Germany, with a 2-week itinerary that included: flying into Zurich; taking a high-speed train to Munich;  catching the University of Minnesota hockey team playing in a late-summer tournament; heading north for press days at the Frankfurt Auto Show; heading south to drive over the Alps and cover the Italian Grand Prix at Monza, which is just outside Milano; back into Switzerland to catch the Gophers in their second tournament in Longenthal; then back to Zurich for a return flight home.

The reason we took the train from Zurich to Munich, without technically ever setting foot in Zurich, was at the command of Audi, which had guaranteed me a vehicle to drive the whole two weeks, if I would make a side-trip to Ingolstadt, which is just north of Munich, and the company insisted they would have a room for us in Munich and pick us up in the morning for a very, VERY swift ride to Ingolstadt to watch cars being made and tour the factory.

At lunch with Audi executives, before we hit the autobahn, I asked if they were concerned because they didn’t make a hybrid, and the Japanese were just hitting the market with hybrid-powered cars at Toyota and Honda. The Germans scoffed at my question, and explained how they didn’t need a hybrid because their diesels were both potent and economically efficient. So we drove away, and I found driving on the autobahn at 120-130 miles per hour was more fun than racing on a track. You pick your speed on the unlimited stretches, and go as fast as you want, or feel comfortable with.

Audi didn’t make an A3 compact in those days, so they gave us an A4 Coupe Quattro to use during our stay — not knowing, of course, how crazy our schedule was in criss-crossing Germany and Switzerland and poking our nose into Italy.

When they brought out the more compact A3, I loved it. Always quick enough and quite economical, even if a little cramped in the back seat.

Well, the 2022 Audi A3 is here, and it rekindled those memories of 1989 in Joan’s mind — with one major difference. “This is the perfect car,” she said. “It is small, but it’s not small inside. The back seat has adequate room, and when I drove it, I couldn’t believe how fast it was, or the mileage I got.”

With a turbocharged 2.0-liter dual-overhead-camshaft 4-cylinder engine, Audi’s refinement meant I wasn’t surprised at how swift it was. Then I carefully scrutinized the monroney — the sticker with all the information and prices. lt pushes out 201 horsepower, and while that explained the power, it didn’t explain the computerized indicator on the instrument cluster that showed one afternoon of driving fetched 44 miles per gallon, prompting me to try my best hybrid-based economy driving style.

In and around Duluth, up and down those endless and steep hills, I registered 58 miles per gallon in one segment, and a dayful of 54.8 mpg! Now, that didn’t make sense, based on the power and performance, so I went back and took another look at the sticker sheet. After describing the 7-speed dual-clutch automatic transmission and the quattro all-wheel-drive system, one little easily overlooked line read: Energy Recuperation System.

The new A3 was a hybrid!  But the proud Germans in Ingolstadt don’t want to admit it readily, because a proud Germany company taking an idea from a Japanese company would not be proper. So the Audi hybrid is ERS — for Energy Recuperation System. It is a mile hybrid, allowing you to capture regenerative electricity from any brake use and replenishing the battery support system, which, in turn, adds vitality to the power and also eases off the use of gasoline with electrical energy.

Now, Audi builds a new pure-electric vehicle, under the e-tron heading, and as written about a few months ago, it is stunningly beautiful. But Joan went slightly crazy in her enthusiasm when I gave her the belated explanation for why the A3 400FSI quattro was typically Audi by clinging to roadway curves with quattro distinction, was supremely comfortable, and was a definite over-achiever when it came to fuel economy.

The EPA estimates who 28 miles per gallon city and 36 highway, for an average of 31. But as my photo shows, 54.8 mpg rates as a definite over-achiever.

The sticker price shows a base of $35,900 and as-tested it was $42,490. The added options included Glacier White Metallic paint that practically glows in the dark, sport suspension, Electronic Stability Control, start-stop, lane-departure warning which is upgraded to active lane-holding assistance, plus rear cross-traffic warning.

Standard features include keyless entry and push-button start, leather seats, LED head- and tailights, and a panoramic sunroof, plus a potent audio upgrade.

“I want this car,” said Joan. “It’s got everything, it looks great, like one of the best German sports sedans, it handles great, gets unbelievable mileage, and on top of everything else, it’s quattro, so you can get through winter as easily as with an SUV. And it’s a hybrid!”

Yeah, but how is it on the autobahn at 140 mph? Maybe we’ll have to take another trip to find out.