On the brink of apocalypse 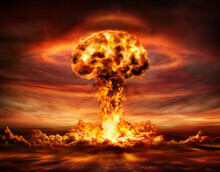 Nuclear weapons “...are a collective death wish...Every one of them is an accident waiting to happen, a potential act of mass murder.” From Command and Control: Nuclear Weapons, the Damascus Accident, and the Illusion of Safety by Eric Schlosser.

Since nukes were invented there have been more than 1,000 known mishaps, accidents, technology failures, communication breakdowns and near launches of nuclear weapons.

This article discusses just seven times when the U.S. or Russia almost launched nuclear weapons by mistake. These show just how easily an accidental apocalypse – the destruction of the world – could have happened.

On this day the newly constructed radar station in Thule, Greenland mistakenly reported the launch of dozens of Soviet missiles. In Colorado the nuclear forces command facility (NORAD) went to the highest level of alert and began preparations for a retaliatory strike. Luckily someone realized Soviet Premier Nikita Khrushchev was visiting New York at the time and the alert was canceled. A later investigation found that the radar had mistaken the moon rising over Norway as Soviet missiles.

Two decades into the Cold War, multiple U.S. early warning radars suddenly stopped working. This was a time of high tension between the U.S. and Soviet Union. U.S. military commanders thought the radars might have been jammed and were the beginning of a Soviet attack. A full, high level alert was ordered including nuclear bombers. Luckily, space-weather forecasters discovered the real cause. A powerful solar flare had jammed the radar. A few military scientists and their knowledge of the sun activity averted what might have become a nuclear war.

Computers at multiple U.S. nuclear command centers reported a nonexistent large scale Soviet attack. Nuclear forces went on alert and national security adviser Zbigniew Brzezinsk was notified that the Soviet Union had launched 250 ballistic missiles (minutes later revised to 2,200). President Carter had only 3 to 7 minutes to decide to retaliate. Luckily ground radar systems showed the attack was a false alarm. The real “attack” was from a training scenario that had been loaded into the computers.

At about 2:30 am, computers at three U.S. nuclear command centers issued a warning of a Soviet missile attack. U.S. Air Force ballistic-missile crews removed their launch keys from the safes, bomber crews ran to their planes and fighter planes took off to search the skies. It was a false alarm. An investigation later found that a defective computer chip in a communications device at the Colorado NORAD headquarters had caused the false alarm. The chip cost 46 cents. False alerts of this kind were not a rare occurrence.

Lt. Col. Stanislav Petrov was on duty this night because another officer was sick. Petrov just happened to be an engineer familiar with the deficiencies of the new Soviet satellite early warning system. So he was skeptical when the system reported 5 incoming ICBM missiles. He reasoned the U.S. would not launch a surprise attack with five missiles. Petrov told his superiors it was a false alarm before he knew that to be true putting his career at risk. It was a false alarm. But if the satellite data had indicated the launch of many missiles, or if a different officer had been on duty, the outcome could easily have been a catastrophe. Petrov was reprimanded for his breach of procedures.

In 1983 President Ronald Reagan called the Soviet Union an “evil empire.” It was a time of high Cold War tension. Able Archer 83 was an annual NATO war game which involved 100 NATO officers simulating a nuclear war. The exercise was very realistic and participants included some European heads of government. The exercise alarmed Soviet analysts who feared that it was a cover for an actual nuclear attack. Soviet nuclear missiles were placed on high alert and readied for launch. Robert Gates, then at the CIA, later said, “We may have been at the brink of nuclear war and not even known it.”

Four years after the breakup of the Soviet Union, the launch of a small atmospheric research rocket from an island in Norway triggered Russia’s early warning system. The rocket was mistaken for a U.S. submarine launched missile. The Russians thought it might be the first missile to detonate a nuclear warhead high in the atmosphere “blinding” their radars before a larger attack. Russian nuclear forces went on full alert and President Boris Yeltsin activated launch codes in preparation for retaliation. Norway had notified Russia in advance but this information hadn’t filtered down to the right people.

These are just a few of the potential tragedies and don’t include the many military confrontations, like the 1962 Cuban Missile Crisis, that could have escalated into catastrophe.

Air Force General Lee Butler spent his entire career working with nuclear weapons. He says, “... we escaped the Cold War without a nuclear holocaust by some combination of skill, luck, and divine intervention, and I suspect the latter in greatest proportion.”

General Omar Bradley advised abolishing nuclear weapons 1948. He said “Ours is a world of nuclear giants and ethical infants. We know more about war than we know about peace, more about killing than we know about living. The way to win an atomic war is to make certain it never starts. And the way to make sure it never starts is to abolish the dangerous costly nuclear stockpiles which imprison mankind.”

There are no national security, political or ideological objectives worth the cost of a nuclear accident or a war. This is something to consider on the 77th anniversary of Hiroshima and Nagasaki as our country pours billions into new and easier to use nukes.