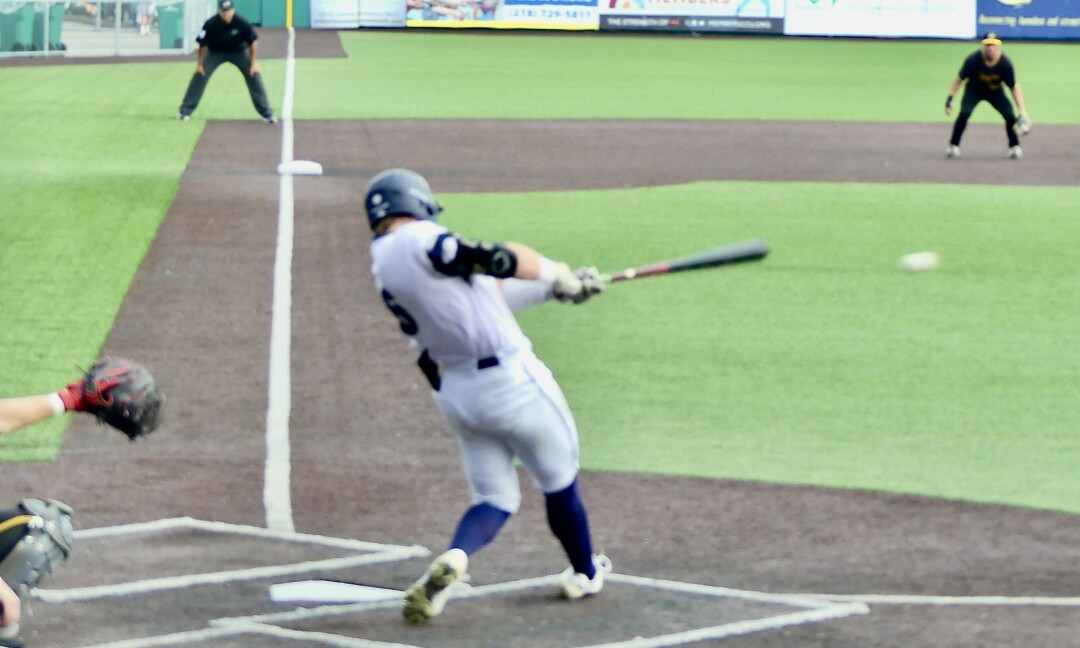 Confidence has never been in short supply for UMD wide receiver Armani Carmickle, who burst onto the UMD football scene last season with a school record 1,315 receiving yards, and 11 touchdowns, after transferring from Northwest Missouri State.

But his confidence seemed to bubble over Monday as he faced the media on the first official day of Bulldog practice. When he was asked if he had set any personal goals for this upcoming season, Carmickle was quick to answer.

Realizing he misspoke, Carmickle laughed and amended that to 1,500 yards.

That’s more realistic, as is his projection for 16 touchdowns, but the record 1,315 yards he recorded last season came from four or five different quarterbacks, as fifth-year starter John Larson – and others – missed games with injuries.

“It was a roller-coaster last year,” said Carmickle, named one of six co-captains for the upcoming season. “We’re hoping for consistency, and it would be nice to have one quarterback all season.”

Having depth at quarterback was never more important than when Larson went down, and the crop of back-ups all played well enough to help UMD finish 9-3 and tied for the North Division title  in the Northern Sun Intercollegiate Conference with Bemidji State, although the Beavers claimed the  trophy by beating the Bulldogs.

The good news is that supporting cast is returning, but the bad news is that the QB job is wide open, and certainly a primary project for coach Curt Wiese, looking forward to UMD’s season-opening game Sept. 1 against Southwest Minnesota State.

Wiese was also ready for the inevitable question that he might have rehearsed his line. In the preseason poll of NSIC coaches, South Division powerhouse Augustana was ranked No 1 with 153 points and 5 first-place votes, with Bemidji State No. 2 with 145 points and 4 first-place votes. UMD came in No. 3 – although No 2 to Bemidji in the North.

But Curt, this preseason poll was conducted among the league coaches!

He did admit that it might be the first time in his nine seasons that the Bulldogs were not picked No. 1, but you get the feeling that will just serve as added incentive.

His new running-game coordinator, Loren Endsley, fresh from Ohio University, has watched all his running backs on videos and is ready.

Co-favorites in the quarterback competition are Garrett Olson, 6-foot, 192 pounds, now a grad student and a worthy fill-in when Larson went down, and Logan Graetz, a sophomore from River Falls, Wis., who transferred in from North Dakota State in time to also play well when forced into duty.

Wade Sullivan leads the running back crop, a proven commodity who said by now, he “knows the playbook like the back of my hand.”

Leading the defense is Brad Dati, another co-captain, who was voted the preseason defensive player of the year after attaining 51 solo tackles and 41 assisted tackles, for a total of 92.

He also said all the politically correct things about preseason polls, but even coach Wiese isn’t likely to question that one.

The Duluth Huskies keep inching up in the second-half standings of the Northwoods League, and their split with red-hot Bismarck indicated what  we might anticipate in the playoffs. The teams split the two-game set at Wade Stadium, blowing a 4-1 lead to lose 7-5, in a slugfest where the Huskies scored four in the fourth and then gave up four in the seventh to falls 7-5.

In the game, the Huskies got three hits from centerfielder Jonathan Vastine and two each from leadoff man Joe Voss, J.D. Rogers and jake Schelonka, the DH.

Voss, who plays at Vanderbilt, is from Duluth, and he has performed well as the right-fielder.

The next day, it was the Huskies turn, as Vastine got three hits for the second game in a row, including a double to drive in a run in the last of the ninth, when Duluth scored four runs to claim a 7-6 victory on a walkoff RBI hit by shortstop and No. 9 hitter Cam Fredericks.

It was the fourth walkout victory for the Huskies in the last two weeks, which might prove an invaluable habit at playoff time.