All that jazz, and then some 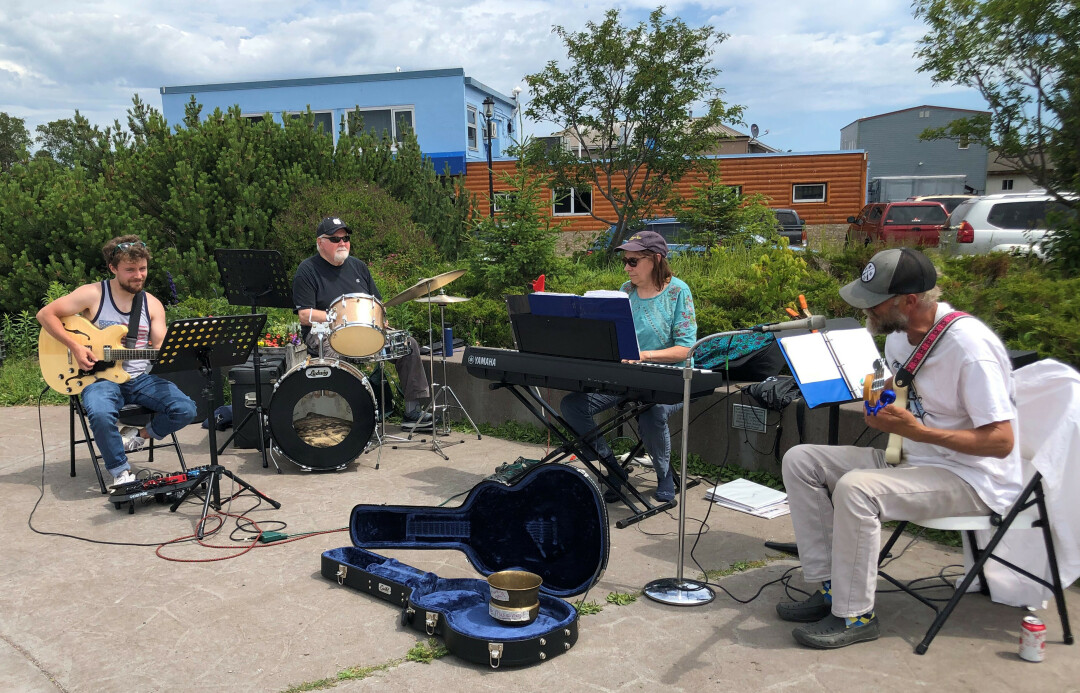 It was another jam-packed week of music in the Northland. I made the most of it by traveling up to Grand Marais on Sunday, July 31, where music at Harbor Park was promised.

Forecasted weather showers shooed at least one band away but I got to hear the Dan Nelson Quartet play one set that included several good old ’30s and ’40s tunes. Nelson, a young man, is something of a prodigy on jazz guitar and was featured in several instrumentals. Other band members are drummer Mike Reeves, who also plays in the North Shore Community Swing Band, Martha Marnocha on keyboards, and John Gruber on electric bass.

The group will perform at the 15th Annual Radio Waves Music Festival, Friday-Sunday, Sept. 9-11, up in Sweetheart’s Bluff in the Grand Marais Rec Park. A few of our favorite local acts (Boss Mama and New Salty Dog, among others) are also in the lineup. Sounds like a fun get-away to me.

On Wednesday, Aug. 3, I was pleasantly surprised to encounter a trio of young men busking outside the Duluth Farmers Market. One played Dobro guitar, another banjo and the third the wash-tub bass. They performed a lively and engaging jug-band version of “Nobody Knows You When You’re Down And Out.” So fitting for our times!

They recently spent time in New Orleans and are traveling around our part of the country this summer, leaving sultry NOLA behind for our cool lake breezes. I gave them my card and they gave me a Mongolian bill worth 2 cents plus a funny story about how they came to have Mongolian money to give away. I’m sorry I didn’t think to get their names – you never know who could make it big one of these days!

Tish Hinojosa, a singer-songwriter from Austin, Texas, was in town for a performance at the West Theater Aug. 4, which I was looking forward to attending. Ads for this gig promised Tex-Mex music along with traditional Mexican tunes, both of which I am certainly into. She has released 22 albums since her first in 1987. During her 30-year career, Hinojosa has received a number of honors, including performing at the White House for President Bill Clinton and First Lady Hillary. So I had high expectations.

Hinojosa was joined by long-time sideman Chip Dolan on keyboards and accordion (he has his own Austin-based band, Grouchy Like Riley). Together they covered a lot of musical ground. Traditional Mexican ballads, a hint of Mariachi (called out as polka), several Nashville-styled country rockers, pop tunes, some covers and even a couple Irish ballads that Dolan sang – “Carry Me Home” and “Song For The Journey.”

Dolan’s keyboard and accordion action added a lot to their performance, especially on the romantic numbers.

The show was laid back and rather low energy, with a sort of easy listening vibe that diminished my overall enjoyment. Likely one reason for this was they were missing guitarist Marvin Dykhuis, who was recovering after shoulder surgery. And the small audience could have contributed to this low-key ambiance. One exception was Chip Dolan’s tune, “My Baby’s Got a Baby” which really boogied.

Hinojosa’s renditions of traditional Mexican ballads were the most heartfelt and moving to me; perhaps because I don’t understand the language and could concentrate on the melodies. One of the best songs of the night was the sad, socially conscious “Something in the Rain” that told the story of a northern New Mexico family of farmworkers that lost a young daughter to the poisonous insecticides sprayed on crops.

Performing original tunes off her 2018 West album, such as “Prairie Moon” with its yodeling component, Hinojosa was weaker with a noticeable reduction in her vocal strength and range. But she was on key throughout, which is something not all older performers are capable of.

Listening to the several CDs I bought that evening, including one of her first albums (Homeland), raised my opinion. On them Hinojosa’s sweet young voice, the professional production and additional back up players proved the quality of her work.

Then there was another festival with music in the Northland that came to my attention – the Honey Bee Folk Festival at the Oldenburg House in Carlton. It took place on Friday and Saturday, Aug. 5-6, though I only made it there on Friday. I first heard about it through the grapevine, which touted the main attraction as being a concert by several professional musicians coming together specifically for this event and venue.

Drummer Glenn Swanson, the owner of the Oldenburg property, invited long-time friends to join him: Pianist and vocalist Andrew Walesch plus three of the well-known, musically talented Peterson clan of Minneapolis – Billy Peterson on standup bass, Ricky Peterson on keyboards and saxophone and Jason Peterson DeLaire with vocals and sax.

Jason jokingly characterized their performance as a “rehearsal.” This was a return show after the two-year COVID hiatus; they were exuberant about playing under the tent on that warm summer evening.
I have never been much into jazz, the exception being hot Dixieland jazz, and so have little listening experience with this genre. Nor was I familiar with these individual players (it was only after hearing them Friday evening that I looked them up online to discover they are all accomplished session and touring sidemen).

Yet the musicianship was so superb and the song selection so seductive, I began to waiver in my opinion of “jazz.” Walesch had a flamboyant Broadway style showcased on several songs, including the Judy Garland hit, “Zing! Went The Strings of My Heart.” Other band members vocalized too on American songbook touchstones like “Masquerade,” “Fly Me To The Moon” and “Honeysuckle Rose.”

And these guys ripped it up every which way. When they played “Mustang Sally” (seriously!) I was convinced there is something to this genre I should explore further. If you are into jazz and want to be wowed, keep yourselves informed as to upcoming musical performances at the Oldenburg House, online at oacc.us. We were promised more are coming.

I finished off this week of music on an upbeat note at Earth Rider on Saturday evening, listening and dancing to The Latelys and One Less Guest. I had seen The Latelys during Homegrown last spring, but other than noting that they really rocked, hadn’t followed them.

Now bass player and lead singer, Jenna Harding, makes me think this young group is really going somewhere. Her vocals were compelling in tone, range and projection revealing her early musical start in opera, of all things.

“Me and Bobby McGee” was one of the covers she shone on. She was well matched and supported by band mates Rachel Reifenberg on drums and C. J. Hanson on keyboards.

The other young band performing that evening was One Less Guest, which was formed back in 2018 in Duluth. Ren Cooper is the lead vocalist. She played a mean stripped down electric violin while Nick Muska (her fiancé, as we learned that evening) played guitar, Nick Glass played both standup and electric bass and Cody Thoreson wailed on drums. They too performed some covers as well as original tunes. The band relocated to the Los Angeles area a little more than a year ago and are now on their “One Hot Night” tour. The grounds were filled with their fans on that superb summer evening in Superior.

Finally a sad note: it was sorrowful news to hear of Zach Ross’s tragic death in a car crash on Friday, July 29. The 28-year-old drummer with the popular band, Crescent Moon, will be sorely missed by his family, band mates, friends and many loyal fans. Our hearts, our condolences go out to all. A memorial service is anticipated sometime in the months ahead and will be reported when confirmed.