Chief Osaugie gets his home back 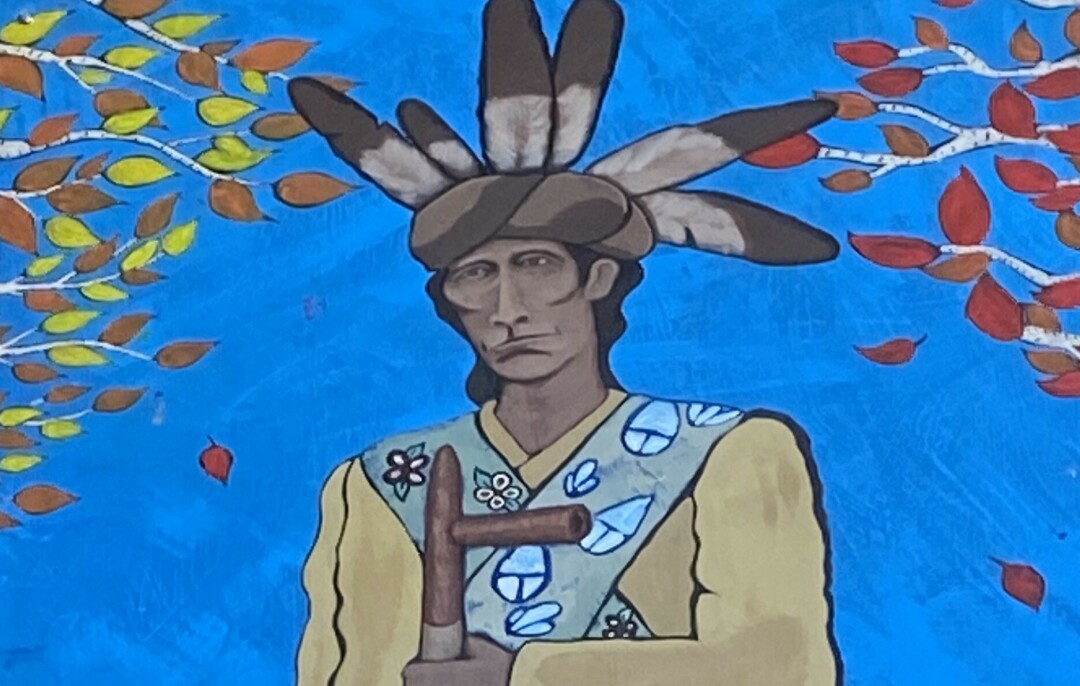 Descendants of Anishinaabe Chief Joseph Osaugie gathered at Denfeld High School Sunday morning, Aug. 7 for a semi-private rededication of the Native American leader’s portrait. The event was timed to coincide with the annual Osaugie family reunion over the weekend on Wisconsin Point.

Meanwhile the City of Superior has taken the historic step of returning Native American burial land on Wisconsin Point to the Fond du Lac Band of Lake Superior Chippewa. A ceremony will take place at Black Bear Casino August 18.

Students and families from across the Duluth district, elementary to high school age, painted the portrait several years ago under the guidance of artist Jonathan Thunder. The students researched many Native American leaders before deciding on Osaugie, who was local.

The painting was displayed in a stairwell at Denfeld but Principal Tom Tusken wanted it in a more prominent location. This summer it was moved to the student commons area where it’s more visible, and Osaugie’s likeness looks out toward his home of Wisconsin Point.

A public ceremony at Denfeld is tentatively planned for October when a plaque, to be made by students and community members, will be mounted in conjunction with this display, said J.P. Rennquist, American Indian home school liaison at Denfeld.

Osaugie (1802-1876) was born in Michigan, moved to Wisconsin Point as a young man and was appointed a Fond du Lac chief by President Franklin Pierce. In 1852 he and other chiefs traveled on foot to Washington D.C., gathering signatures for a petition along the way, to confront an executive order which intended to remove the Anishinaabe from Northern Wisconsin.

He was one of the signers of the 1854 Treaty by which the Anishinaabe ceded ownership of their land to the U.S. government, opening the area to mining and township development. The treaty created reservations including Fond du Lac and Bad River and allowed the Anishinaabe to continue hunting, gathering and living on the land.

Osaugie's descendants were forced out of Wisconsin Point starting in 1915, when U.S. Steel wanted to build ore docks. Tribal members fought their case in court, unsuccessfully. From 1918 to 1919, a burial ground was dug up and relocated to St. Francis Cemetery in Superior in what was essentially a mass grave, 198 graves in 29 plots.The graves were poorly maintained and bones ended up washing into the Nemadji River.

Years later, one of the attorneys who represented the Anishinaabe, John Cardigan, related a story to the Milwaukee Journal. He said that in 1916 a member of the Anishinaabe told him, “The day the white man enters the Point to dig up the remains of our ancestors will see this nation visited by the most terrible fire in its history, swept by the most devastating plague and plunged into the bloodiest war the world has ever known.”

And indeed, as Cardigan recalled, when a crew started to move the graves on Oct. 8, 1918, “that day about noon the heavens became black for a time with a peculiar cloud.” He later identified this as the devastating Cloquet fire.

His date appears a little off as the fire actually started Oct. 10 and turned deadly Oct. 12. But for a two year-old prophecy, it’s accurate enough. Fire tore through Carlton, Moose Lake, Kettle River and Duluth, wiping out 38 communities and killing 450 people. At the same time the Spanish Flu swept the world (public buildings in Duluth closed Oct. 11) and World War I took an especially bloody turn.

U.S. Steel never did build the ore docks after realizing what seems obvious, that the area was too sandy.

Many ancestors are said to be still buried on Wisconsin Point. The burial site that was dug up is marked by a stone sign and mementos such as feathers, boots, tobacco and walking sticks left by visitors.

In 2021, people searching for prizes in the Winterfest Medallion Hunt damaged the burial grounds and Midwest Communications canceled the event. The incident prompted the City of Superior to look at renaming Moccasin Mike Road, which many view as disrespectful. The road was built over a trail named after Chief Osaugie.

The same year, Superior City Council unanimously agreed to start the process of returning ownership of the burial grounds to the Fond du Lac Band of Lake Superior Ojibwe, finalizing the deal at its July 19 council meeting. Council also approved vacating land near St. Francis Cemetery to provide access along the Nemadji. Both parcels will be formally ceded Aug. 18 at Black Bear Casino. 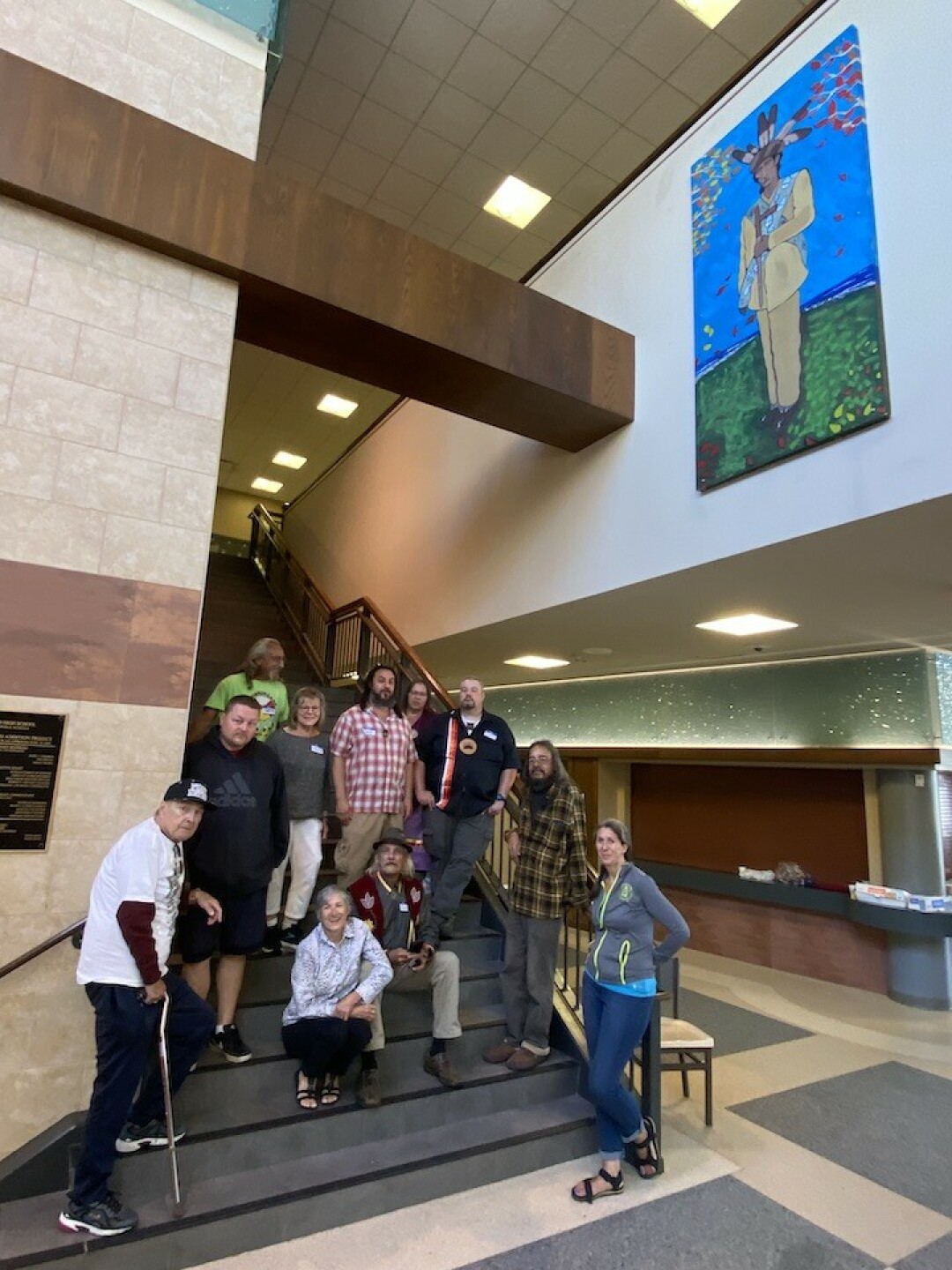 Descendants of Chief Osaugie with the Denfeld portrait in its new location. Photo by Richard Thomas. 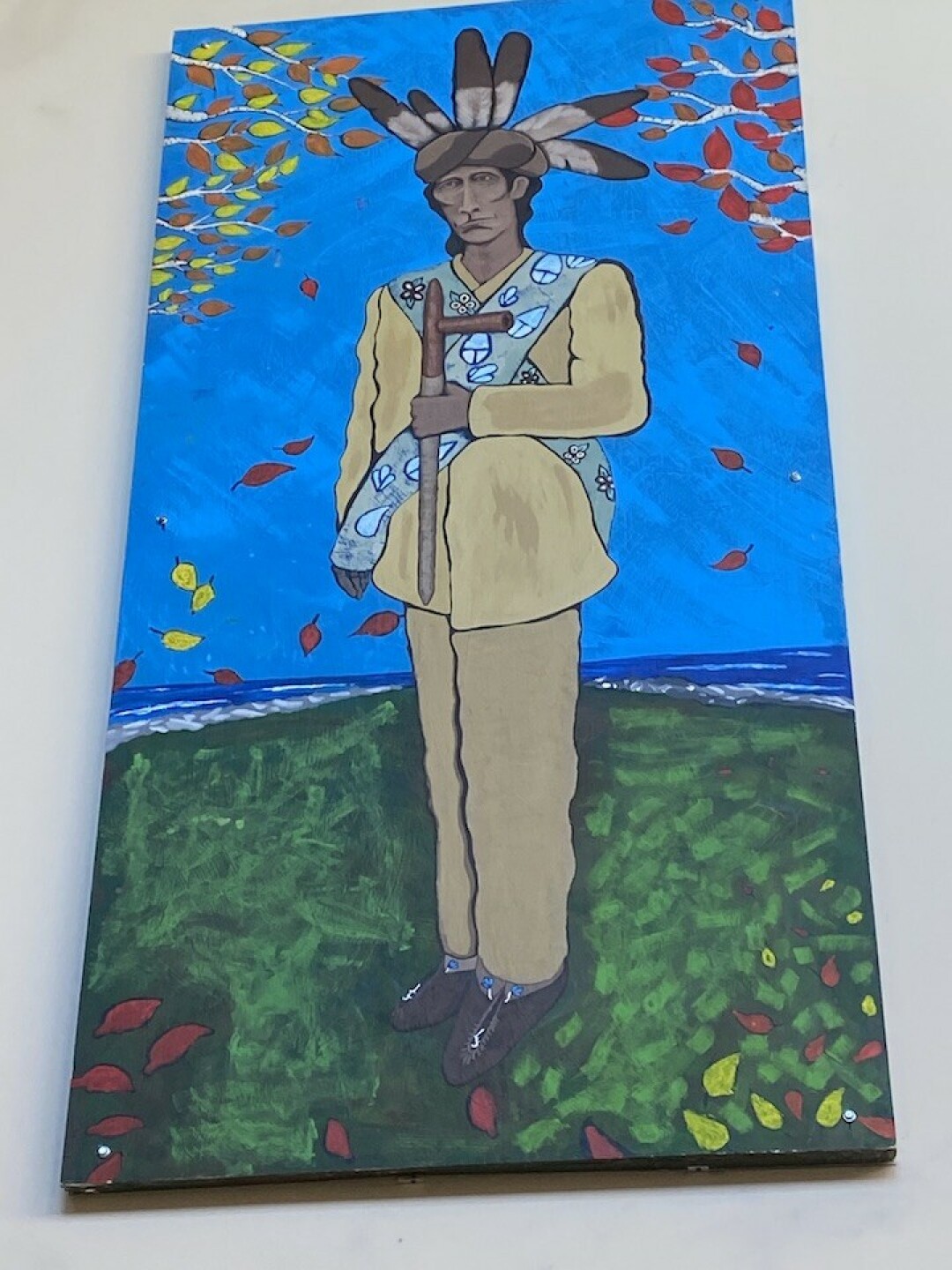 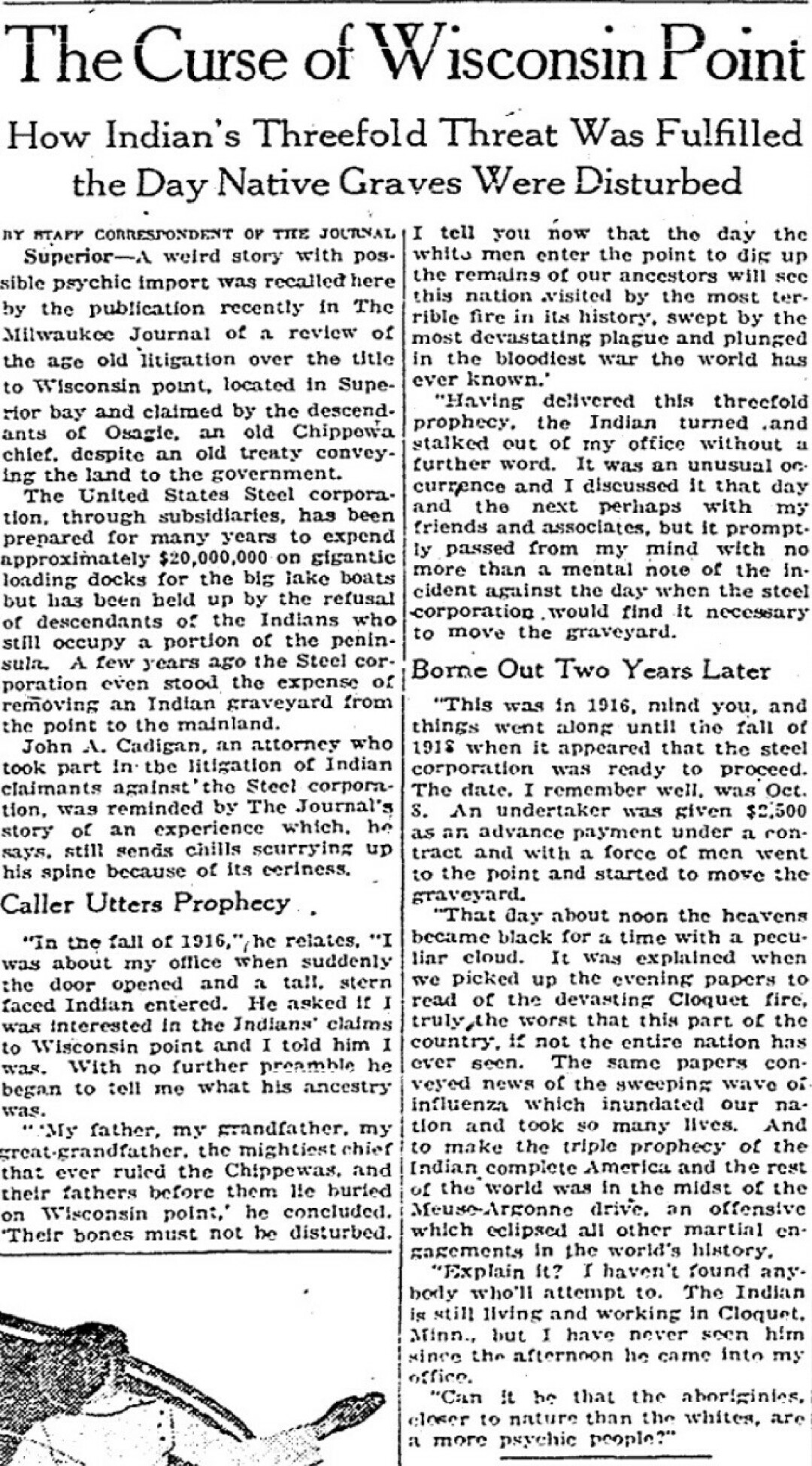 1925 article in the Milwaukee Journal 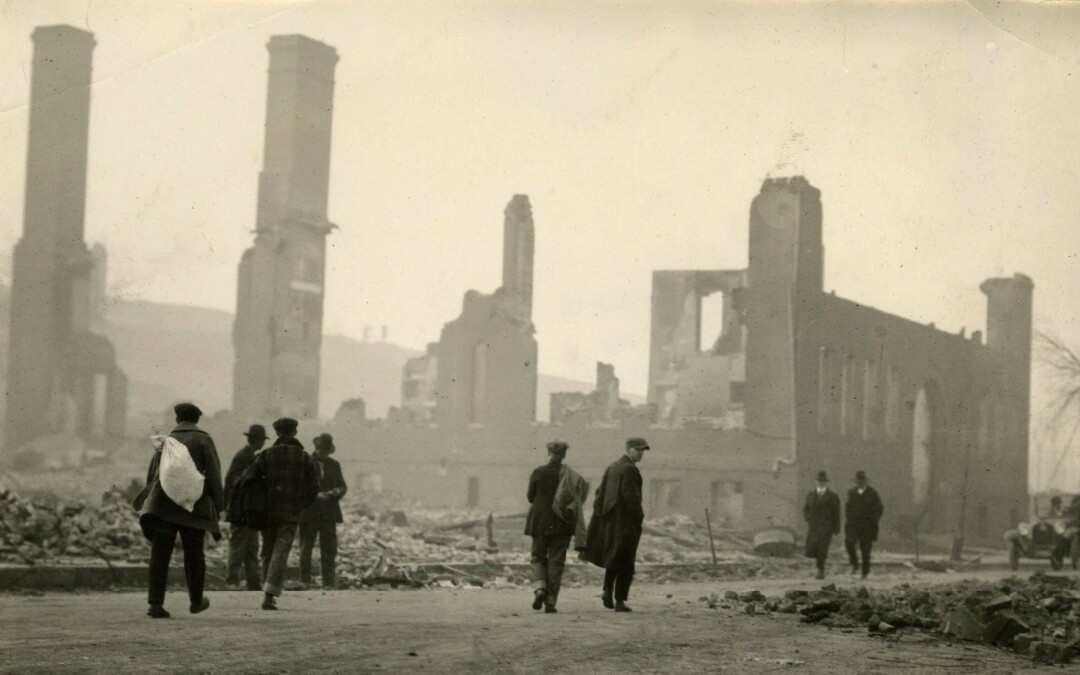 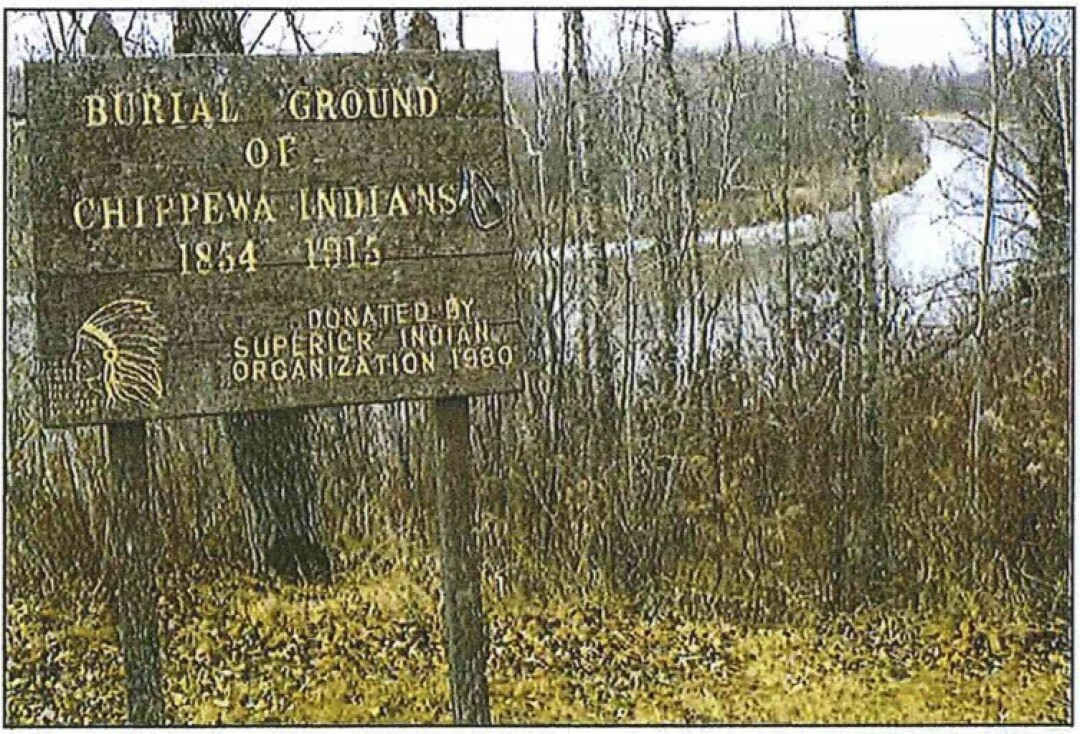 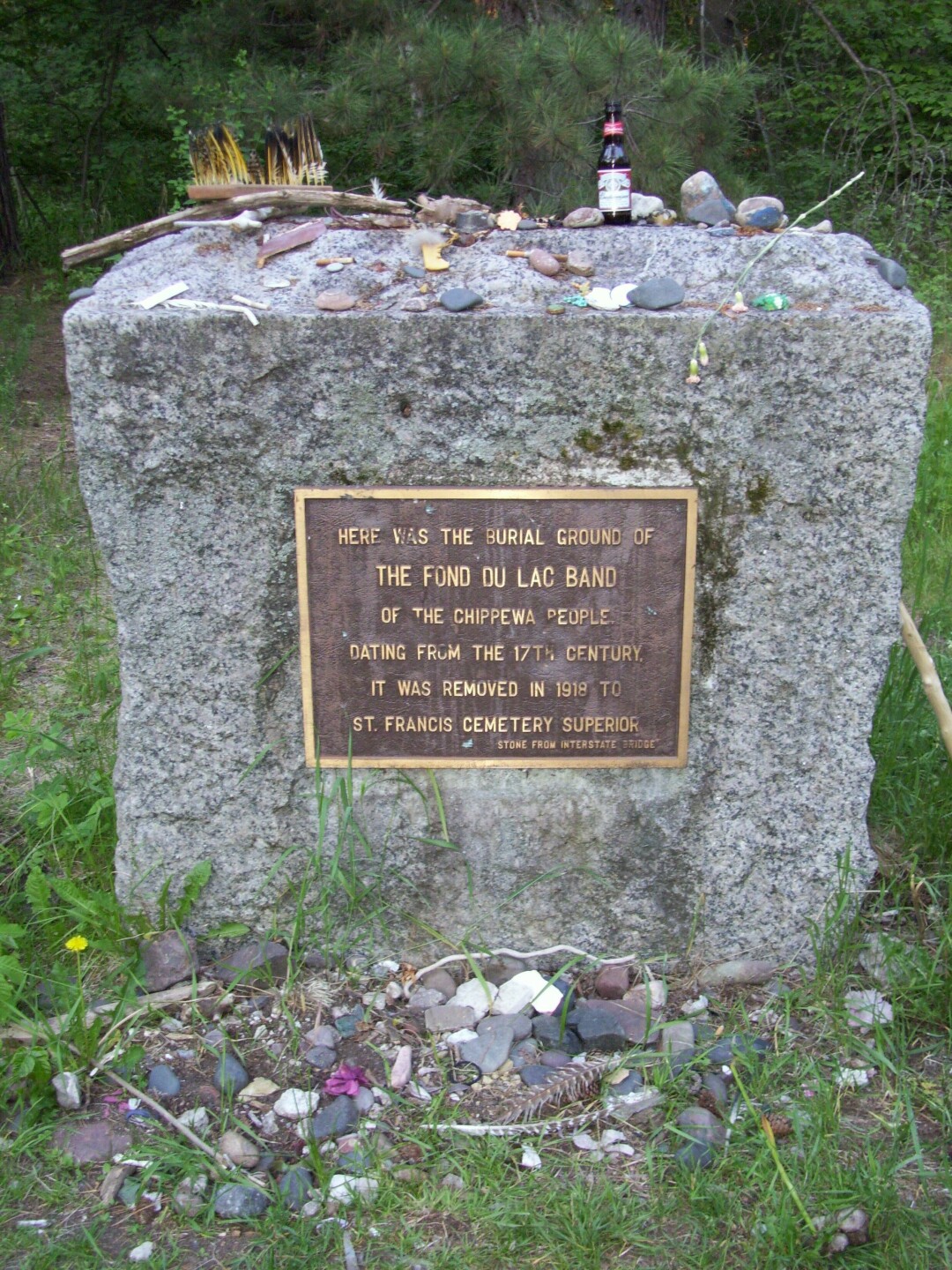