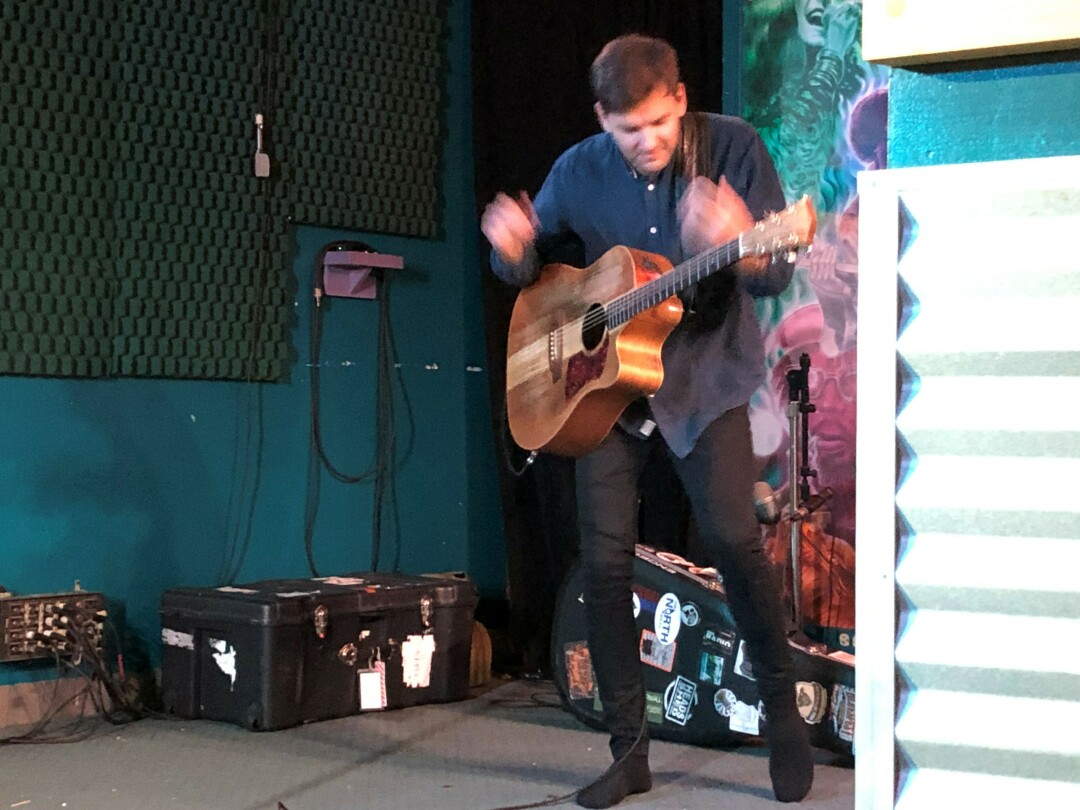 First off, I must apologize for misidentifying, in last week’s review, one of the duo that played the Bach piece at the DSSO Bridge Session on Friday, July 22. It was not cellist Betsy Husby, who I credited as playing with Tom Berrigan on bass, but the incredible Erin Aldridge on violin.

In addition I reported the Fractals’ drummers name wrong; it’s Marvin Pomeroy, not Melvin. Mea Culpa!
Another week of incredible music events commenced on Monday, July 25, at Wussow’s Concert Café in West Duluth with a show by Australian-born guitarist Daniel Champagne, who is now based in Nashville. I was able to attend the second sold-out show on Tuesday, July 26, (after hearing how great it was from friends who saw him at the added Monday show) thanks to my “press pass” and Pete.

Jason Wussow first heard Champagne back in 2015 at the Red Mug in Superior and enticed him to perform at his own place the next several years. After a two-year hiatus due to COVID, Champagne is midway through his current 44-show tour. A couple days earlier he had performed in Sundin Hall at Hamlin University in St. Paul – a large auditorium in stark contrast to Wussow’s intimate venue.

When queried about how this might have affected his show, Champagne said he appreciated the closer connection he felt with the audience here.

At 33 years of age, he has been touring for more than a decade, appearing in 30 countries, which accounts for his highly polished and professional performance, no matter what the venue.

Champagne is an engaging and unique performer using only his well-worn and customized acoustic guitar together with full body kinetics for percussive effects. With taps, scratches and pizzicato pluckings, along with strumming and finger picking, he pushed the boundaries of what any audience would expect.

Even his tunings, required between almost every number due to the beating his instrument takes, had the qualities of pleasant songs. And speaking of songs, his voice was sweet and clear, modulated by his movements back and forth from the microphone.

Most of his numbers were original pieces – “Super Nova,” “Back to Nova Scotia” and “Shimmer Through The Wind Screen.” The latter piece brought tears of homesickness to one Aussie audience member.

Then there was the instrumental number, “Best You,” written for his guitar teacher of 10 years wherein he slid the capo up and down the guitar neck at various intervals to make key changes.

Beyond his one-of-a-kind presentation, Champagne charmed listeners with his patter between numbers, explaining the inspirations for songs and how a two-week quarantine upon re-entering Australia was a boon for his songwriting.

My only quibble with his performance was his rendition of Don McLean’s song, “Vincent” – also known as “Starry Starry Night.” For me, this song is beautiful in its simplicity and was not improved by the theatrical presentation Champagne gave it.

Champagne’s final number was arty and avant-garde as he raised his guitar over his head, then setting it down on the stage on its side to let the last notes resonate. We held our applause until the last note faded, then loudly expressed our satisfaction with the show.

It was a fitting celebration of Wussow’s 23rd anniversary. With concert seating, I am now convinced that Wussow’s is a commodious venue for such cutting-edge performances.

The debut of the new band, Damien, at Glensheen’s Concerts on the Pier on Wednesday, July 27, was another wondrous experience. The group is comprised of three well-known local musicians – Alan Sparhawk, Marc Gartman and Owen Mahon – plus Alan’s son, Cyrus Sparhawk.

It wasn’t a reprise of tunes these guys are known for, but a truly new endeavor to bring Afro-Cuban music to our ears. And did they ever have the vibe down. With Gartman in a serape and Sparhawk dressed as a ship captain, the band cruised through their original compositions. “Damien” was the title of one that Sparhawk thought might be a first: a song named after a band, until he was disabused of that notion by his band mates.

One tune, reported to be inspired by images recently radioed back from the Webb telescope brought to mind other spacey songs like David Bowie’s “Starman” and “Space Oddity” and Elton John’s “Rocket Man,” albeit with a Caribbean backbeat.

Owen Mahon really showed his chops on several numbers with his six-piece drum kit plus an electric drum pad from which he produced a realistic steel drum sound.

The hour-long concert (interrupted briefly by rain) provided a refreshing calypso/Caribbean/Bob Marley sound that had some of us dancing on the lawn and boat horns blaring their captains’ approval. A double rainbow arched over the lake and the band, portending good things for this mix of musicians.

A third evening of incredible music last week was Walter Trout’s concert at West Theater on Thursday, July 28. Not really recalling this legendary blues man from days of old (with the band Canned Heat, for example), I looked him up online.

After reading about his being hospitalized for eight months, having had a liver transplant, and suffering brain damage, I figured it might be the last chance I’d ever get to see him. What a heartwarming surprise then to see him alive and kicking ass with his electric guitar. He rocked the standing-room-only house, shared his tale of physical ailments, and related how he had to learn to walk, talk and play guitar all over again after his release from the hospital.

Trout asked audience members to enroll as organ donors so they might save a life, like his was saved. His album Battle Scars includes “I’m Almost Gone” with its heavy guitar licks.

This was real blues we heard. Many attendees traveled 60 or more miles to hear him sing the blues and they were not in the least bit disappointed. It would seem that his survival gave Trout a whole new lease on life.