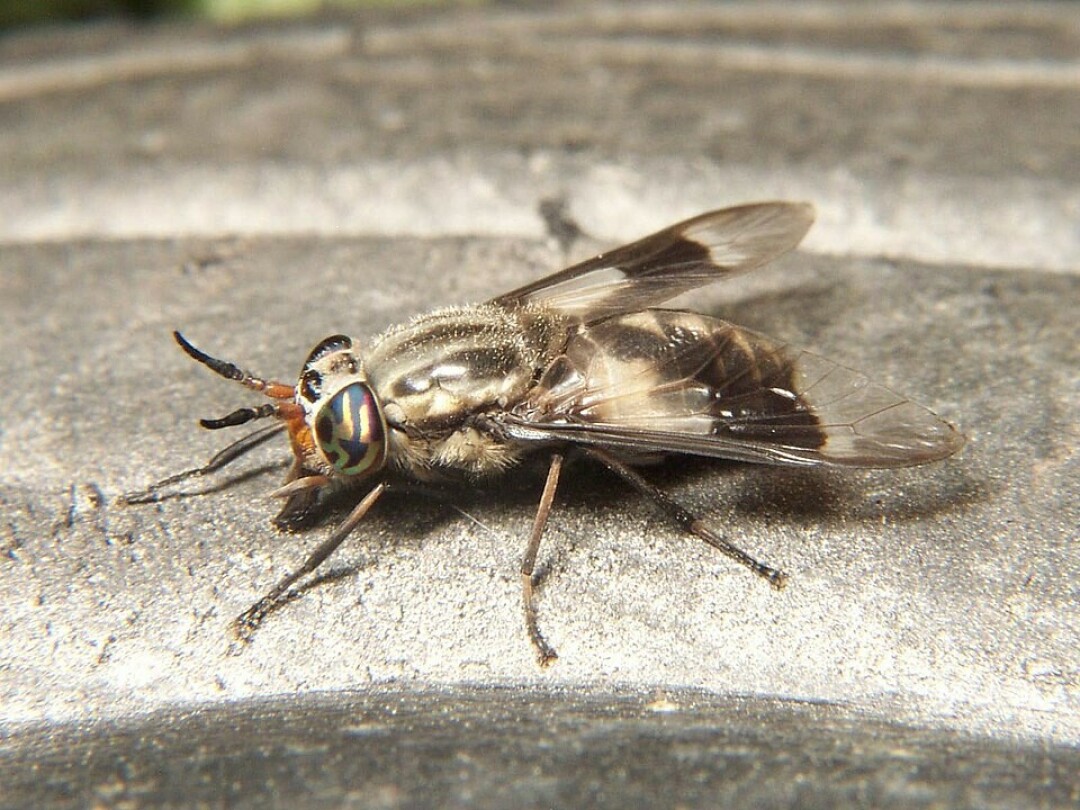 The smell of sweetfern wafted up from the warm, dry plants all around me in the Moquah Barrens. A cluster of deep blue caught my eye, and that particular handful of blueberries went straight into my mouth. Mmmm, so satisfying.

As I plucked more berries off a neighboring twig, the sharp tip of a blade of grass poked my upper arm. Dropping the berries into my ice cream pale, I brushed away the grass, only to discover I was brushing away a deer fly with striped wings and green eyes. When it returned to the scene of the crime, I squashed it with a satisfying pop – both audible and tactile. Mmmm, so satisfying.

Deer flies are the bane of summer here in the Northwoods – and around the world. Only Iceland, Greenland and Hawaii are safe. Just as the black flies become a distant memory and the mosquitoes are relegated to “mosquito hour” in the evening, the deer flies start interfering with our beautiful, sunny days above 71.6 degrees Fahrenheit.

The reason we dislike deer flies so much is that the females need a blood meal to fuel egg development. Unlike the precise, syringe-like mouth of a mosquito, deer flies have two scalpel-like mouth parts they use to make a cross-shaped incision in your skin. Their saliva contains anti-coagulants to make it easier for them to lap up your blood with a sponge-like tongue.

As I discovered the next day, the anticoagulants can cause allergic reactions. The bite on my arm became sore, and even a little hard when I pressed on the area. Although it seems plausible that these flies would transmit diseases to humans, Purdue University Medical Entomology Department reports that extensive studies have only confirmed limited transmission of tularemia or “rabbit fever” in the western United States.

Once the blood meal is complete and the eggs are ready, the female fly deposits batches of 100 to 1,000 of them onto vegetation near water or damp soil. The larvae hatch in just a few days and drop down. Larvae breathe out of their butts and eat tiny animals or rotting organic matter. They take up to three years to develop, pupate and emerge as an adult. Males emerge before females and feed primarily on pollen. While many websites claim that this makes them important pollinators (many flies are), no site gives any specifics. I have to admit, I’m skeptical.

While it makes them seem more distinguished, the fact that deer flies are “true flies” in the order Dipertera doesn’t make them any more lovable. Unlike their predators such as dragonflies and wasps, Dipterans use just one set of wings to fly (di=two, pteron=wing). Their hindwings have shrunken into halteres, which sense rotational movement and enable acrobatic flight.

Often, that flight is in tight circles. In the Boundary Waters, I’ve spent many a portage with a deer fly buzzing around my hat. In that context, the wilderness rangers I worked with called them head flies and cursed them loudly. With hands full of canoe paddles or clasping the gunnel of the canoe on our shoulders, there wasn’t much we could do to shoo them off. At the far end of the portage there was a mad scramble to load gear back in the boat and paddle furiously away from shore.

Deer flies are territorial, so if you get far enough away from their home, they might leave you behind. If not, paddle strokes were interrupted with wild slaps and frustrated hand waving until their beady green eyes and yellow-striped body popped between our fingers.

Sometimes a dragonfly came to our rescue and darted around the canoe – eating the mosquitoes and deer flies drafting in our wake.

Insect repellents don’t work well on deer flies, but because they are so attracted to your head, one of the best ways to protect yourself is to put something sticky on your hat. The deer flies land – hoping to burrow into your hair for a meal out of your scalp – and instead get trapped.

Piragis Northwoods Company sells Deerfly Patches 12 for $12 in their Boundary Waters Catalog. Otherwise you could follow the advice from the Bangor Daily News in Maine, make friends with a taller person so the flies circle their head instead!

While humans haven’t found effective control measures for deer flies (we’d have to poison the wetlands where their larvae live), nature has options.

Certain parasitoid wasps lay their eggs in the larvae and pupae of deer flies, and then the wasp larvae slowly eat the fly larvae alive. Revenge! Other wasps simply chew up the fly larvae and feed this slurry to their young. Mmmm, so satisfying.

It’s natural to curse these blood-drinkers and cheer the wasps who eat them, even while chewing delightedly on blueberries ourselves. Every being needs to eat! Do deer flies have a purpose in nature?
Certainly, they are woven into the food web. But ecologists recognize that value is subjective, and the purpose of any living being is simply to ensure the continued existence of their species. Your blood can help! Mmmm, so satisfying. (Just kidding! Even I’m not that magnanimous!)