Tundra’s refinements are designed to last 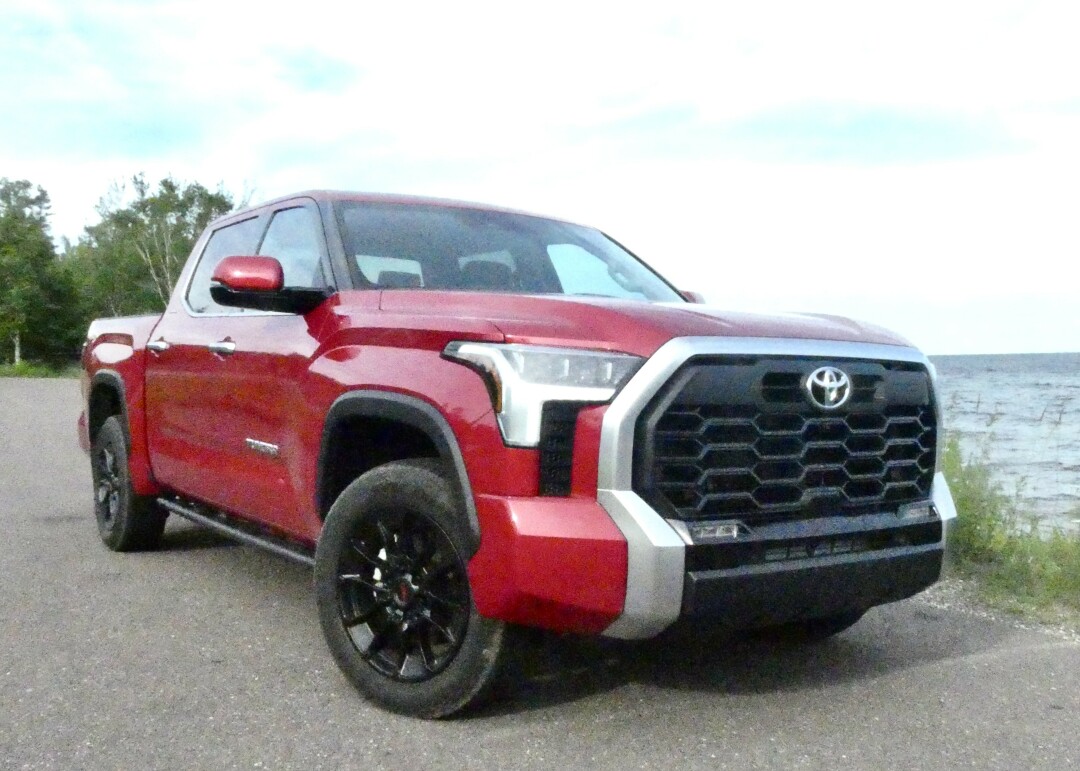 Toyota’s restyled Tundra has a twin-turbo V6, and is strengthened throughout. Photo by John Gilbert.

The Toyota Tundra has become a mainstay in the pickup truck world for being solid, roomy, comfortable, nice inside, with good seats. We jut didn’t know how steady and dependable and trouble-free the Tundra was until after I had the chance to test drive the new and completely redone 2022 model.

When you say “completely new,” you sort of look forward to a totally new appearance – especially since this was the first Tundra redesign after 15 years of standing pat, I ant.

I anticipated something startling. I mean, Ford, Ram and Chevrolet have redesigned their full-size pickups probably five or six times in the last 15 years.

So I was a little surprised when I first saw the new Tundra. It came in a bright red and was a full crew cab, and at first glance, the new front end and grille were indeed new and different. The blacked-in grille gives the Tundra a much more macho, rugged appearance and was about what I expected.

But realistically, overall, the new Tundra is a lot like the Tundras have been for the past 15 years. I have criticized Toyota for building a great car, with a great engine, and then spending the next few years refining it to iron out any possible idiosyncrasies and make it as perfect as possible, but maybe yielding the design and technology leadership to competitors.

However, I guess I will stop such criticism after a message I got from Toyota.

A 6-foot-6 fellow named Victor Sheppard bought a 2007 Tundra and drove it for work, and for pretty much everything else, too. He brought it to Toyota’s attention because he found a flaw, after 14 years: The odometer froze when it reached 999,999.

Everything on the Tundra was still working, from the engine, transmission, brakes, lights – everything. The only thing that didn’t make it the full distance was the indentation for the driver’s side sun visor. That, and the odometer, which simply refused to advance to one million miles because it only had six digits.

Toyota chief engineer Mike Sweers didn’t hesitate and started thoroughly going over Sheppard’s well-used truck. It led to a number of changes made to the new Tundra.

Toyota already had executed a plan to strengthen the frame and the bed, going to heavier and stronger materials, such as the composite bed. They also were ditching the traditional leaf springs in the rear, replacing them with coil springs for a considerably more comfortable ride in the rear seats, which also have been rebuilt for  more comfort, with a pliable, rubber-like material on the seat cushions, which flip up to uncover storage bins underneath.

In the pickup segment, Ford and Chevrolet still have leaf springs, while Ram has moved ahead in comfort by going to coil springs several years ago. When you drive them all, the Ram stands out for its comfortable ride.

Inside, the competition for most attractive dashboard continues unabated. The Tundra made a giant stride by offering an optional information scree that measures 14 inches. It almost seems too big, because it stretches across the center of the dash like a picture window.

Toyota also has veered away from its potent but gas-swirling 5.7-liter V8 and supplied a 3.5-liter twin turbocharged V6, which has been beefed up with a wider drive chain among revisions throughout.  Nobody will quarrel with the sweet-running 3.5 V6 – not when it puts out 389 horsepower and 479 foot-pounds of torque. Connected to a smooth-shifting 10-speed automatic, which can be switched into one of its modes for “eco,” getting you shift points at 3,000 RPMs. Otherwise, you can run the revs up to 5,000 and you’ll never notice the shifting.

That’s enough to haul a payload of 1,940 pounds in that composite bed, or tow 12,000 pounds of trailer. All of this for a sticker price of around $56,000 for the loaded Tundra, which includes a mind-blowing audio system and all the connectivity and safety stuff, including lane-departure warning and assist.

In overall size, the Tundra looks bigger and more menacing, but in reality it seems slightly smaller overall than the F150 or Ram or Silverado. Maybe it is more compact because of the rounded off corners that allow you to maneuver in traffic and still see enough over the sloping hood and fenders, or maybe it is a bit smaller.

If it is, check it out. Big pickups have continued to grow in size and girth, and if you have need for every corner and space in those trucks, take your pick. But if you can get along with a slightly more civilized size, with some traditional features – an old style T-shaped shift lever on the console, for example – then check out the smoother, more refined, and more comfortable 2022 Tundra.