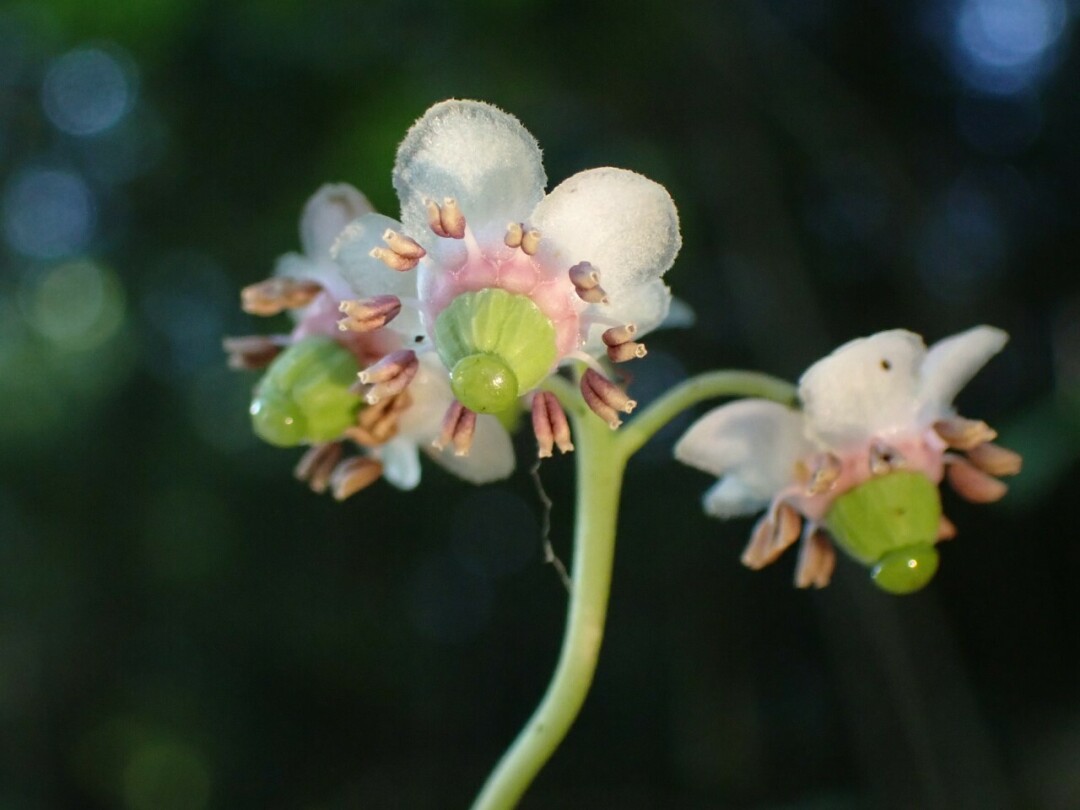 Pipsissewa is a delightful flower of the shady forest. Photo by Emily Stone.

On the first afternoon after the museum’s summer naturalist interns arrived, we took a walk up the driveway. Despite head nets and long sleeves, we slapped continuously at mosquitoes who found slivers of bare skin.

You’ve read about my driveway before – fluorescent moss, wolves on the trail cam, tracks, scat, fungi, oak apple galls and contemplative walks provide inspiration not far from my house. I’m lucky to live where mycologists can spend an entire three-hour program just exploring the few tenths of a mile that lead to the museum’s staff house.

But for all its wonders, there’s one treasure on my driveway that’s been eluding me: pipsissewa.

“There!” we all squinted through bug netting as I pointed out a tiny grove of evergreen plants. While sometimes called Prince’s Pine, the shiny, dark, oblong leaves look nothing like pine needles or like the clubmoss that also bears that whimsical common name.

It’s these evergreen leaves that inspired pipsissewa’s scientific name – Chimaphila  which means “winter-loving” in Greek. It’s also the leaves that have been used for medicine throughout the millennia. Native Americans, colonists, and pioneers all report using this plant to treat rheumatism and kidney issues, among a long list of other ailments. Modern chemistry has demonstrated the potential of chimaphilin to have antifungal and antioxidant effects.

But it’s the flowers I’ve been longing to see. The memory of hot pink petals with a bright green center is emblazoned onto my memory from a July 4 canoe trip in the Boundary Waters in 2007. I dropped my pack beside the portage trail and crouched down to admire the splash of color. Somehow, that’s the only time I’ve managed to catch this beauty in bloom.

On my driveway, one plant, with four whorls of those elegant leaves climbing up its stem, displayed a dry, brown cluster of last year’s seed capsules on the tip of the stalk. Should that make me feel hope or frustration? I obviously missed the flowers last summer – probably while zooming past on my bike.

But those empty seedheads are also confirmation that at least one of these plants is mature and will likely put up a flowering stalk again this year. The question is, will I see it?
“Help me out,” I pleaded with the interns on that walk in early June. “If we all remember to check for flowers once in a while, surely one of us will notice when they bloom!”

Each day as I passed the little grove of pipsissewa in my car or on my bike, I slowed down to look, and the interns did too. “Still not blooming,” we confirmed back at the house. And even when a cluster of pale pink buds appeared at the top of the stalk, they seemed to pause there for ages, sleeping beauties waiting for some cue to open.

For some flowers, the cue seems to be the touch of the sun. But in all the times I paused to check on their status, the plants were never once in direct sunlight. Hemlock boughs formed a lacy ceiling just the same color as pipsissewa’s leaves. How can a plant survive in such darkness? Certainly, the woody stems and leathery leaves that can last four years are part of that. Their durability allows for thriftiness in the face of limited resources. But pipsissewa has another secret.

Down under the ground, attached to pipsissewa’s roots, are the pale, threadlike mycelium of fungi. Those fungi are connected to other roots from other plants within this grove. Like the rest of their cousins in the Health Family – Ericaceae – this diminutive plant is networked into the Wood Wide Web.

About 90% of all plant species have a mycorrhizal relationship with fungi on their roots. The intricate net of fungi is highly efficient at gathering water and nutrients. In return, plants manufacture sugar during photosynthesis and share some with the fungi.

Pipsissewa, a diminutive plant of the deep shade, is a bit of a mooch. Known as a partial myco-heterotroph, they produce some sugars on their own, but also steal some of their energy from other plants, siphoning off sugars from the mycorrhizal network in order to supplement their own photosynthesis.

That energy is essential to construct tiny pink buds and then burst them open into vibrant parasols – which they finally did on July 8. Each nodding flower contained a lime green center pistil shaped like a stocking hat, surrounded by a lovely pink brim, with a fringe of ten pairs of pink anthers, all ringed by five white petals arching gracefully toward the sky. They were just as beautiful as I’d remembered.

It’s hard to begrudge pipsissewa a little bit of extra sugar, when that energy allows their sweet flowers to brighten up their dark forest home.

For more than 50 years, the Cable Natural History Museum has served to connect you to the Northwoods. The Museum is now open with our exciting Growing Up WILD exhibit. Follow us on Facebook, Instagram, YouTube, and cablemuseum.org to see what we are up to.