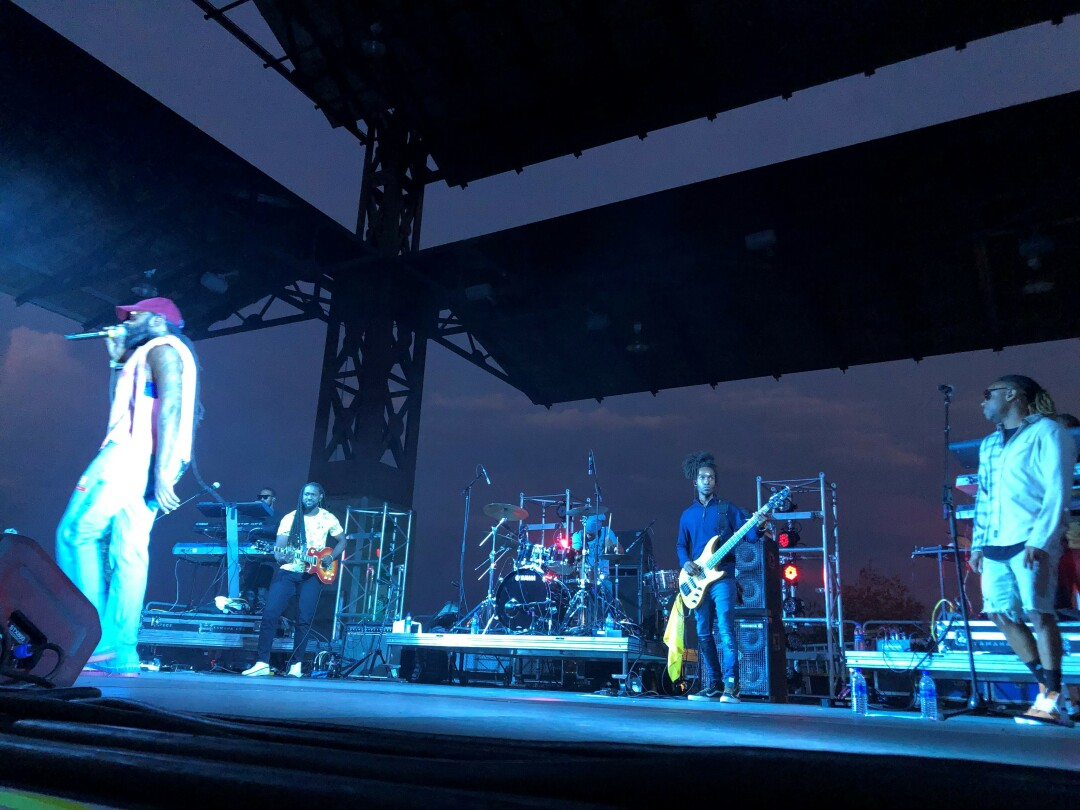 As usual lots of music was happening throughout the Twin Ports this past week, so I had to pick and choose among many interesting offerings.

I have never attended any of Superior’s 8-week “Bayside Sounds Around Town” series nor heard the band, Last Call, that kicked it off on Wednesday, July 13.

Bayside Sounds, unlike Chester Bowl Concerts, moves around to different locations in Superior – this one was at Billings Park. Others will be held at Fairlawn Mansion, Kelly Park, Central Park, Webster Park and Barker’s Island.

The line-up of performers looks enticing; check out the City of Superior’s website or Facebook for details about these events. Note that a “bonus concert” with Big Wave Dave and the Ripples will be at UWS on Sept. 14.

Last Call, comprised of Michael Peters on electric bass, Shawn Hagen on guitar, Matt Johnson on guitar, Wayne Aune on drums and lead vocalist Julie Jacobsma, who also plays keyboards. They are a competent cover band with danceable tunes dating mostly from the 1980s and ’90s, and bands such as Joan Jett and the Blackhearts, Cranberries, Prince and Nirvana.

I couldn’t tell whether the mostly much older crowd that evening dug these tunes. A rather bawdy song, “Hey Mickey” by Toni Basil from 2007, perhaps was a bit edgy for this family-friendly venue. However, Jacobsma’s vocals were strong and key to conveying the emotions behind the few even older tunes such as John Prine’s 1974 tune, “Angel From Montgomery” and Kris Kristofferson’s 1969 “Bobby McGee.” If you are intrigued and like to dance, look up their upcoming gigs on Facebook under LastCallDuluth.

To avoid any conflict of interest, I am not reviewing Reader Fest that was presented by this publication on Friday, July 15, at Bayfront Festival Park as part of its 25th anniversary celebration, which I did attend. I must mention a couple aspects of that day-long festivity though – the clumps of soil from a recent aeriation of the grounds that effectively disguised goose droppings. One really had to watch one’s step!

Also, this was the first time I heard that evening’s headliner, Davina and the Vagabonds, with its hot Dixieland repertoire straight out of New Orleans (though they are based in the Twin Cities). It would account for a sort of musical whiplash I experienced as I immersed myself in reggae the next day at the 16th Annual Bayfront Reggae & World Music Festival. 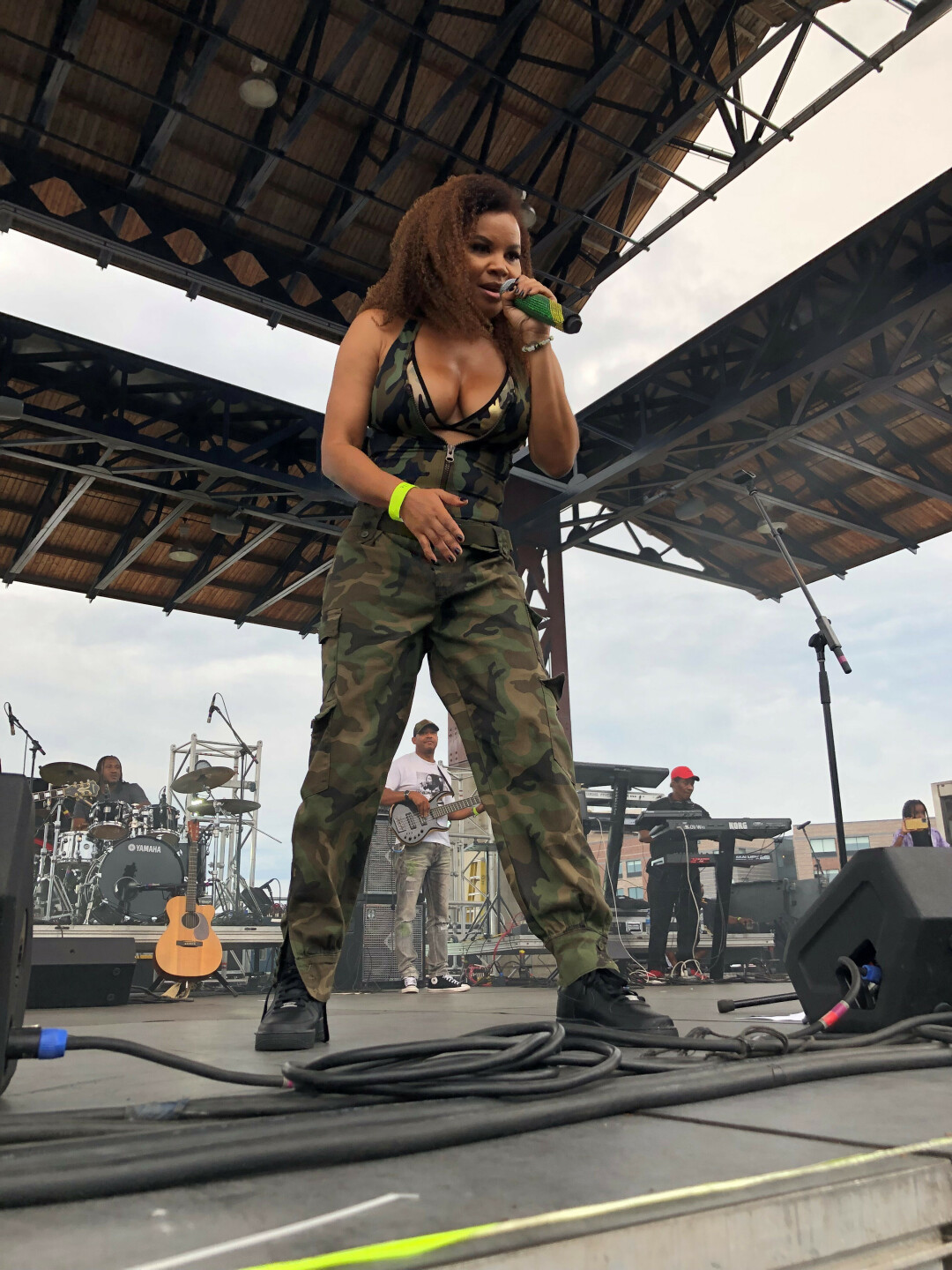 Ce’Cile was quite the showstopper.

At noon Saturday, July 16, Bayfront gates opened for Reggae Fest, allowing me and visiting friends to find a great listening spot (keeping an eye out for those goose droppings!).

We need not have rushed, as the grounds were slow to fill this year. There were technical difficulties that compromised the first two acts, DJ Sound of Fujun and Carolyne Naomi, such that we might well have waited to arrive until later in the afternoon when things got back on track with an impromptu set by the Chicago-based band Indika.

Indika (named for a type of marijuana but spelled differently) was billed as “one of the most innovative and influential reggae bands…and premier backing bands in the Midwest.” Not only did the band get the festival off the ground, finally, but it provided back-up for three of the other acts on the bill: Nerry, Ce’Cile and Gyption. As such Indika was responsible for the overall reggae vibe of the day. Members are Ricardo Phillips, AKA “Champagne,” on the drums; Ryan Coleman and James “Jimmy” Peart, both on keyboards; Cortney Panton on bass guitar; and Vinnie Roof on guitar. 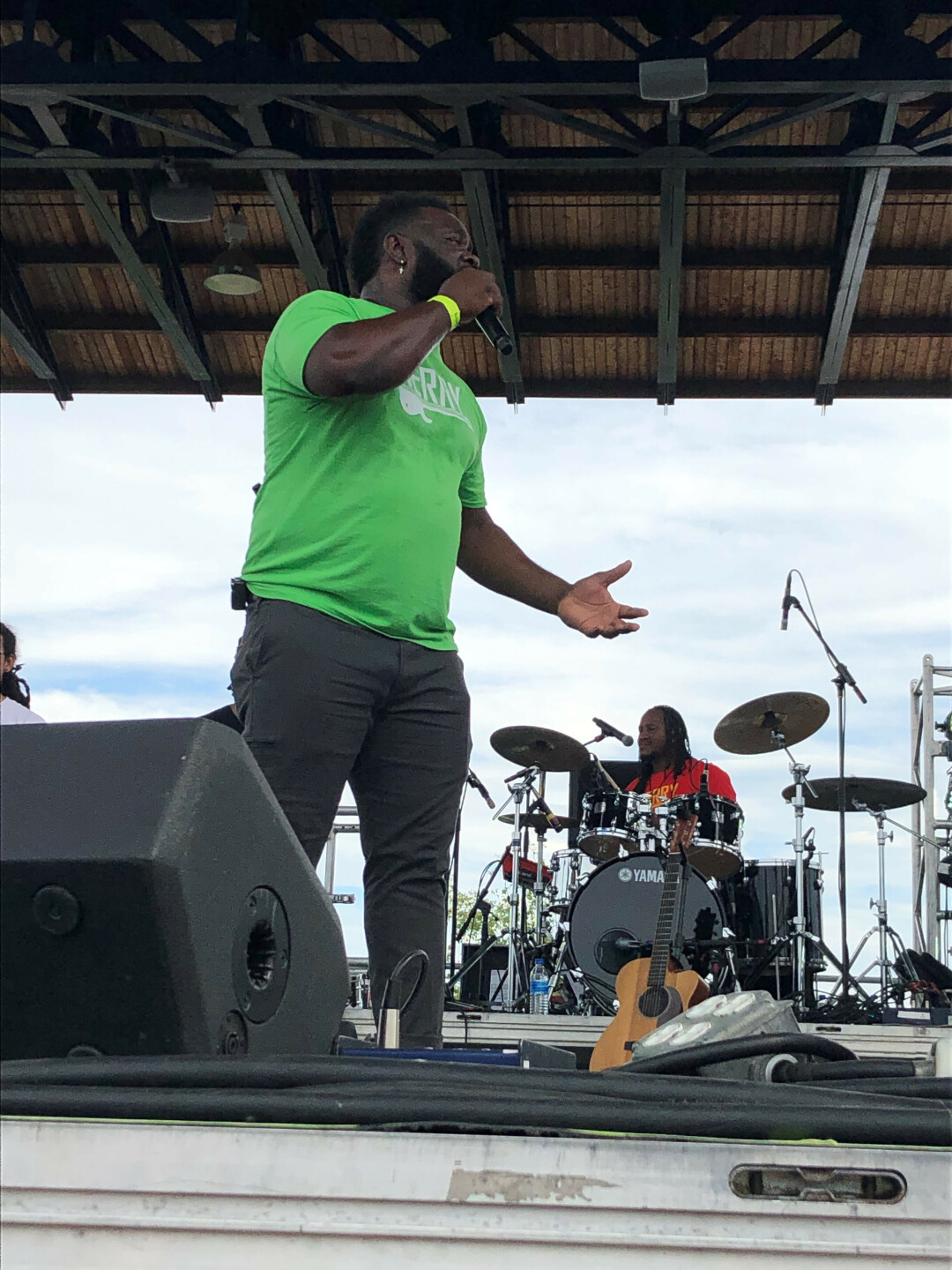 Nerada Birssette, or “Nerry” was the first scheduled performer I got to hear. He was good and had a strong connection with the audience, bringing a young woman up on stage so he could “preach” to her. She could hardly believe her luck. 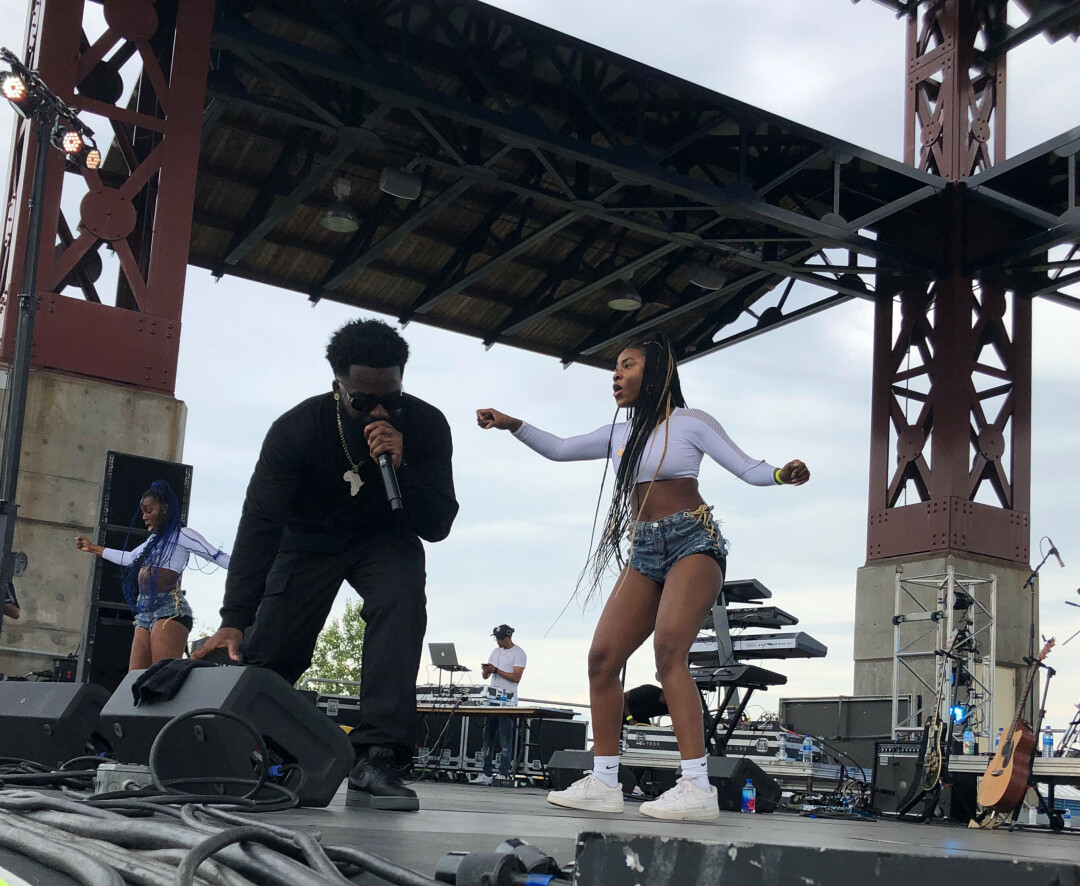 Afro B with two dancers to jazz up his set.

Next up was Afro B, who was basically a DJ, with two scantily clad dancers to jazz up his set.
Ce’Cile was quite the showstopper with her sexy fatigues outfit. You could tell the young guys in the audience ate up those two acts. 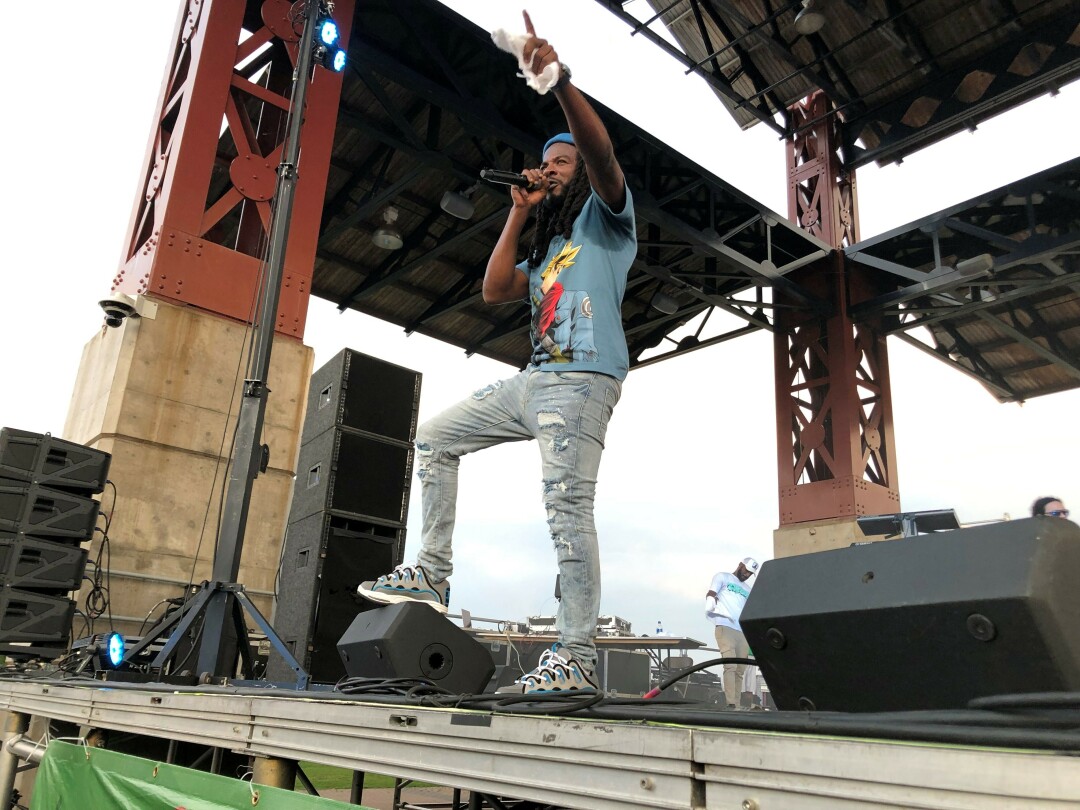 Then there was Gyptian, the band that played songs the audience knew. This was the most magical moment of the entire event, when many attendees sang along with that band’s songs, creating a surround sound.

People watching was amazing, with a limbo contest engaging both flexible and inflexible contenders, risqué dancing and some serious twerking to be seen, I came to realize that the event encapsulated the essence of an entire culture to which I am only an interested bystander.

The mostly Black crowd was a clear and welcome contrast to Duluth’s overwhelmingly white populace, of which I am one.

By the time Tarrus Riley took the stage it was getting late and a lot cooler with a brisk wind off the lake.

This singer had his own 8-piece backup band, including the unlikely addition of a saxophone, signaling the hybrid sound produced. Like the other acts that came before, showmanship was the outstanding aspect of his performance.

The day-long inundation of reggae music had me satiated before the last notes were played. I headed home a wee bit early via Superior Street, wanting to see about the street dance in front of Dubh Linn’s Irish Brew Pub.

With a $5 cover charge and hordes of college-age folks crowding in, I decided my weekend had been sufficiently filled with music. My only wish is that I didn’t have to pass up so many other performances to enjoy a weekend of music festivals.