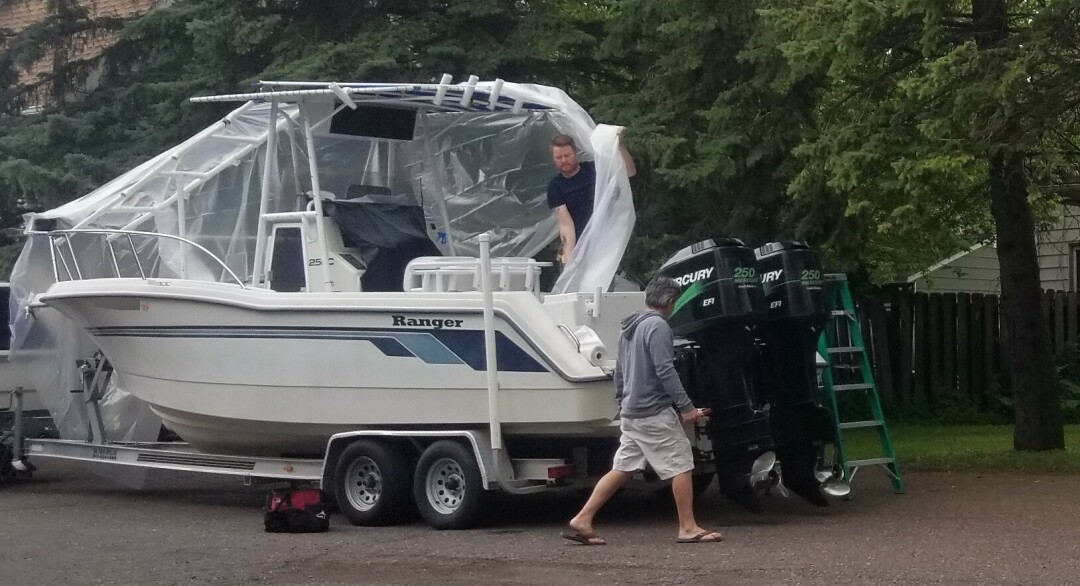 At 611 North Central Avenue, Shipshape measures and makes covers to conform perfectly to the many lines and contours of boats. So, basically they make something to cover a “ship’s shape” at Shipshape. In a sense, this workshop or kind-of mini factory fits well into the feel and history of West Duluth.

I discovered this place when I was helping a friend having his large boat measured for a cover. I don’t know if I was much help, but I got to see the place and my co-reporter/dog Sarg got to sniff some people.
Heading north on Central Avenue to the shop, slightly after passing Grand, on the left is a vacant lot.

This unassuming space was once politically the core of an expanding universe of commerce and a thriving community independent of what we now call “downtown.” Even the name of the street “central” (West Duluth also has a “Main Street”) is evidence this is true.

On this vacant lot was once  the Village of West Duluth’s Hall. It contained a fire station, jail and courts. The village trustees met there before West Duluth was annexed by Duluth in 1894.
If it wasn’t for the proto-great-depression known as the Panic of 1893, the power of this spot might have grown and West Duluth would have continued to house a large number of manufacturers. We can imagine an alternative history where West Duluth became the true giant of the twin-ports.

North of this lot, is the repurposed West Duluth Municipal Building, which was used briefly after the two Duluths merged. Then, are the Memorial Park Apartments and an old Masonic Hall now housing Shipshape Products.

As you would expect for something built by a group named after workers of stone, this building is grand and still has a corner stone commemorating its completion by the Masons. Going north on Central, it is the last commercial building for a while, and has a house right next to its parking lot.

Nowadays, it is a slight curiosity when businesses and even manufacturing are located inside of a residential area. But this fits well with the early history of the area in its early days, with workshops seemingly popping up on every corner. The businesses in this old building are being true to West Duluth’s original aspiration to be a center of manufacturing. 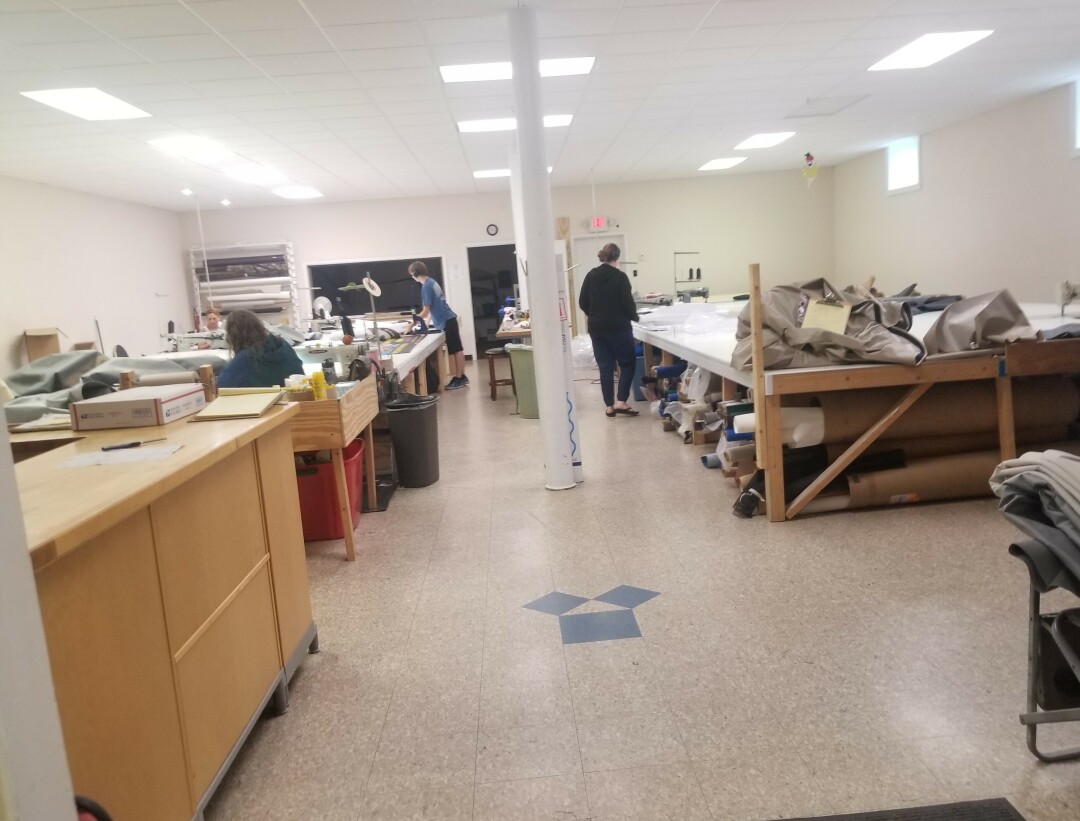 My friend parked the large boat on the parking lot and the friendly staff fitted the boat with a large plastic sheet, which will become the template from which the boat cover will be made from.
Just before it started raining, two experienced men helped guide this beast of a boat out of the parking lot through a small opening into the alley. I contributed by moving the next-door neighbor’s trash can out of the way.

From the outside, you might assume the old building has been divided into many apartments. Once inside, you can see Shipshape has honored the history of this great building by still having lots of wide-open spaces. In the basement, are giant tables with large industrial sewing machines, to fully stretch out the covers being made. Various large rolls of fabric are underneath the tables. A lady who was sewing introduced herself to Sarg.

Upstairs are even more large spaces. A man was working with a large triangular piece of plastic forming the template for some kind of sail cover.

They don’t make sails, but they repair sails. They make strong quality reusable covers to protect northern boats from the brutal winter weather. They sell a lot of covers in the Twin-Ports but also ship covers to all over the Great Lakes region and beyond.

The “reusable” part is key. You might have noticed lots of people at places like Barker’s Island put shrink wrap on their boats. This protects them well but usually the expensive wrap has to be replaced every year. Getting a custom cover should be cheap in the long run and this means less plastic in landfills.

This is good for the environment and is another reason Shipshape is a good fit for West Duluth.