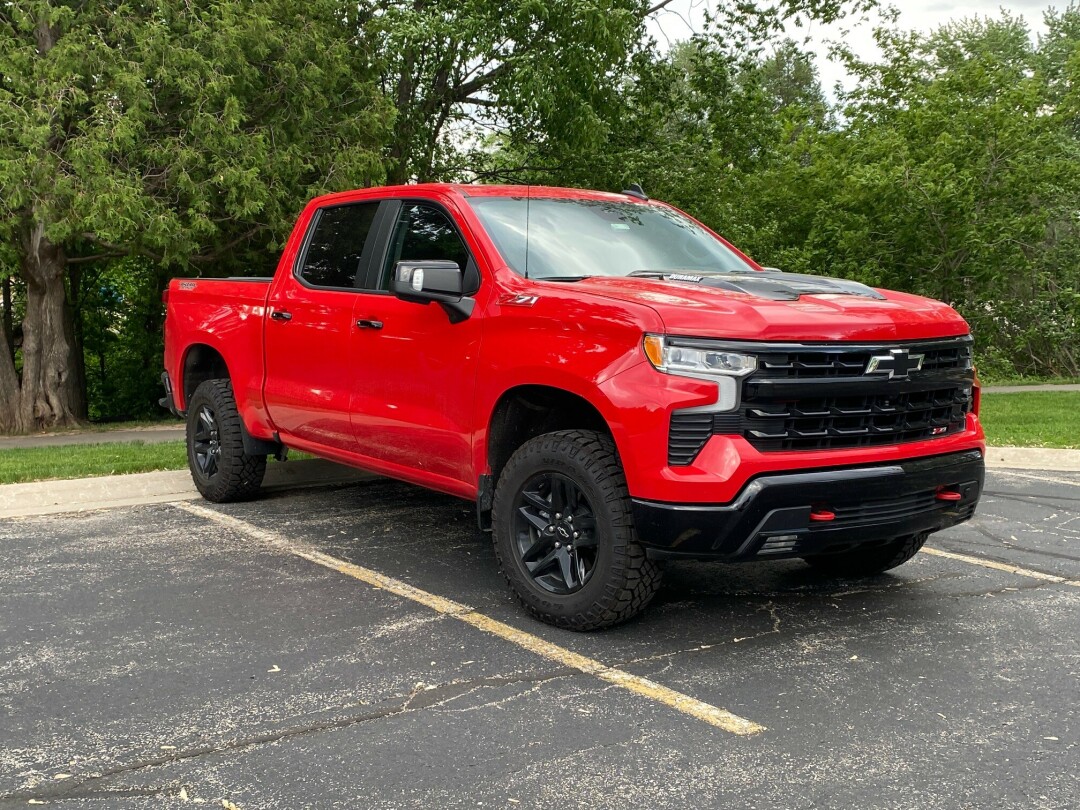 The 2022 Chevrolet Silverado Crew LT Trailboss 4WD pickup that we took to Elkhart Lake, where I had my heart attack. Photo by John Gilbert.

There was no indication my older son Jack and I were headed for anything but the usual year’s driving highlight of trying a dozen or so of the latest vehicle from every manufacturer, on a lap around the fabled 4-mile road racing circuit at Road America in Elkhart Lake.

Along with that highlight, I could gather final information for road-testing the 2022 Chevrolet Silverado Crew LT Trailboss 4WD pickup. I was spending a week getting to know and appreciate the Silverado, which came equipped with a 3-liter turbo-diesel – called “DuraMax” because Chevrolet groups all its diesels under that nickname.

This one was painted “Red-Hot red” with black trim, and had the Trailboss fittings, including 2-inch more ground clearance, the Z71 performance package, skid plates and enormous Goodyear Wrangler tires on black 18-inch alloy wheels for when you want to go off-roading. And all the alerts and warning devices as well as very comfortable bucket seats and interior amenities for when you’d driving on the streets and highways.

We cruised effortlessly down the highways from Duluth to Elkhart Lake, Wis., and appreciated getting up to 26 miles per gallon on a tank that had about 200 miles of range left after we drove the 380 miles down to the Osthoff Resort in Elkhart Lake.

That, however, was where my road-test plans were suddenly and shockingly interrupted. We walked three blocks to the annual pre-Midwest Auto Media Association (MAMA) fish fry dinner Tuesday night, and I had no idea it would be my last dinner for a month. As we walked, I had to stop, once then again to try to catch my breath. What’s with that? I had trouble drawing a deep breath, and we got a ride back in a new Hyundai Genesis sedan afterward.

The annual spring rally works out so that members of MAMA meet up with representatives of any and all manufactures who want to get high-level exposure for their newest vehicles, and this time it was May 23-24, catching up for pandemic interruptions the past year or two, so we hustled over to the track for the Wednesday morning breakfast meeting. It was a miserable day, chilly and wind-blown rain pelting us as we headed for the track to choose our first rides. I wasn’t feeling great, so I rode in the passenger seat while Jack drove us around in a Toyota Supra.

He went to swap cars, and I went to the parked Silverado to grab my rain jacket. As I walked across the paddock, the shortness of breath hit me again, but harder. I stopped and doubled over but it didn’t help. I dropped to one knee, and tried to gasp for air. Now, because media drivers might go off the track, Road America has the high-level emergency crews they might have for an Indy Car race.

As Jack approached, he heard a fellow say, “That guy’s in trouble.” Jack said, “That’s my dad.”

All I remember is that before I could drop my second knee, I was in an ambulance, heading for Fond du Lac, Wis., and the St. Agnes Hospital, part of the statewide SSM Health group. I was unconscious when they rolled me into the emergency room, and a battery of doctors took over.

They found three blockages of arteries and veins requiring stents – particularly the main artery going down the middle, which was 100 percent blocked. They inserted the three stents, and during the procedure, my heart stopped, any they restarted it. Then it stopped a second time, and they restarted it again. When they finished, I was moved into a room in the intensive care area, where Jack waited, having followed the ambulance in the red Silverado.

I was unconscious, with a couple of tubes down my throat, and Jack stayed by my bed until they abruptly asked him to leave. My heart had stopped a third time!

This time they had to do CPR, fracturing a couple ribs as they revived me. I was never sure what the term “cardiac arrest” entailed, but I was in the process of learning it, first-hand.

As a person who had a clean physical checkup a year ago, I also happen to be someone who has never had a drink of beer or wine or any alcoholic beverage, never smoked a cigarette, never taken any drugs. So as I was trying to recover from being unconscious, the concoction of drugs they injected into me produced some incredible hallucinations. I was on the all-time high and never knew it. When I came to a full week later, on the next Wednesday, they finally removed the rude, harsh tubes down my throat and I opened my eyes to see my wife, Joan, Jack and younger son Jeff, who had driven his F-150 39 hours from Bellingham, Wash., to Fond du Lac to get there.

I immediately launched into a very detailed story of what had happened overnight – how I got a one-man helicopter and flew back to the northern suburbs of the Twin Cities, where I “circled Circle Pines,” before landing and going into a bowling alley/bar that I don’t know exists and mingled with the guys in the bar. A couple of the nurses who had tended me in the ER and the ICU were also laughing.

“You were really funny,” said one, named Emily. “We’d have to say you were the most entertaining patient we’ve ever had.”

In my emerging consciousness, I thought it might be the next day; instead it was a full week later. The inside of my mouth and gums and tongue were crusty from being parched dry, and after they tried to get me to eat something, I agreed to chew on ice cube fragments, and that was all I had eaten in a week.

Jack later explained to me how a nurse named Danielle had been with me from ER to ICU, and that a Dr. Santa Cruz had come in from off-duty and was the one who revived me in the ER. I met him, not knowing how grateful I should be, but the entire battery of doctors and nurses I met were fantastic, and worked beyond the call of duty on my behalf.

While flat on my back for a full week and more, during the full three and a half weeks I was there, I lost a lot of weight and strength, which turned my legs into spaghetti noodles. Another roaming nurse, named Adam, filled me in on some of the details and a half-dozen other doctors stopped by my bed.

“I never thought I would see you like this,” said one.

Another doctor asked if I smoked, and I said no, and that I also hadn’t ever taken a drink of beer or alcohol, and I thought those things might someday pay benefits.

“They already have,” the doctor said. “You’re alive. If you had smoked cigarets, you wouldn’t be here.”
The attitude of the whole staff, that I was their miracle patient, boosted my optimism through some basic physical therapy, where A.J. pushed me to try to walk without the walker, which I did, and occupational therapist Caitlyn got me able to make it to the bathroom and dress myself and regain the ability to take care of basic functions.

The only thing that didn’t immediately start working was my kidneys, so they put me on dialysis to try to inspire the kidneys to function. There were signs they were starting to work, and the doctors decided I was capable of being discharged to transfer my own doctor and continued dialysis work in Duluth.

Joan, who had driven the seven hours down and spent a fortune with our sons on hotels and meals, had driven back to Duluth to resume work. Our sons also returned home, although Jeff waited to be sure I was OK and discharged before the long drive back to Bellingham. Joan drove back down, and after a dialysis session Saturday morning, I got things packed up and stretched out in the passenger seat of our Kona while Joan drove all the way back to Duluth.

We arrived at about 9:30 pm on Saturday, June 18, and drove past Bayfront Park to see the rain-soaked remnants of the all-day concert and party following Grandma’s Marathon. Sunday morning happened to be both Father’s Day and Joan’s birthday, and I stretched my endurance for my 100-foot walk, one minute rest, then the next 100 feet until I got out to our rural road. I looked up at the blue sky behind the trees, and at the intense blue of the lupines which have lines our property since my dad threw a handful of seeds into the ditches 70 years ago.

And the idea of this being the greatest Father’s Day of my life hit me squarely between the eyes. Because I was still here to appreciate it.

Joan told me later that after doctors revived me the third time, in the ICU, that each time had weakened my heart significantly, and while they could revive me again if it stopped again, the lack of oxygen might mean brain damage, so she had to decide. If my heart stopped again, would she prefer the risk of getting me back with brain damage, or pull the plug right then.

Fortunately, she didn’t have to face that choice. Doctors found my baby kidneys had led to a buildup of fluids inside me, and drained from 1.5 to 3 liters of fluid out of me at every dialysis session. That’s still happening, at the Fresenius Kidney Care Center in Hermantown, where a nurse named Whitney informed me that the progress of my kidneys functioning had improved to the point I might be able to leave behind the dialysis treatments.

My heart, which was dangerously low, at 25 percent efficiency, had improved to 37 percent and rising, and both my blood pressure and lung capacity have returned to normal.

But my sudden absence from the pages of The Reader have met with a heartwarming amount of well-wishes and support from throughout the Grandma’s Marathon folks, all the hockey and car people I’ve met over the years, and friends and, just plain readers of my auto reviews and sports pieces.

But you can get boosted up and taken down in a matter of seconds. At the St. Luke’s dialysis center, as I was rolled into the room, a woman named Linda supervising the room, greeted me with: “John Gilbert – are you the guy who writes for the Reader? I love the Reader, and I must say you are my favorite writer in the Reader. I enjoy your auto reviews every week, even though I know nothing about cars.”

Then she turned to her associate, Melissa, and asked, “Do you read his stories?"

Melissa said, “No, I never look at the Reader.”

I had to laugh. Fame is fleeting. But I’m glad to be back and after reflecting on how it took an incredible confluence of skill and timing by the emergency crew at Road America, all the doctors in Fond du Lac, the seamless handoff to Duluth care centers, and the continued recovery, now I must try to catch up.