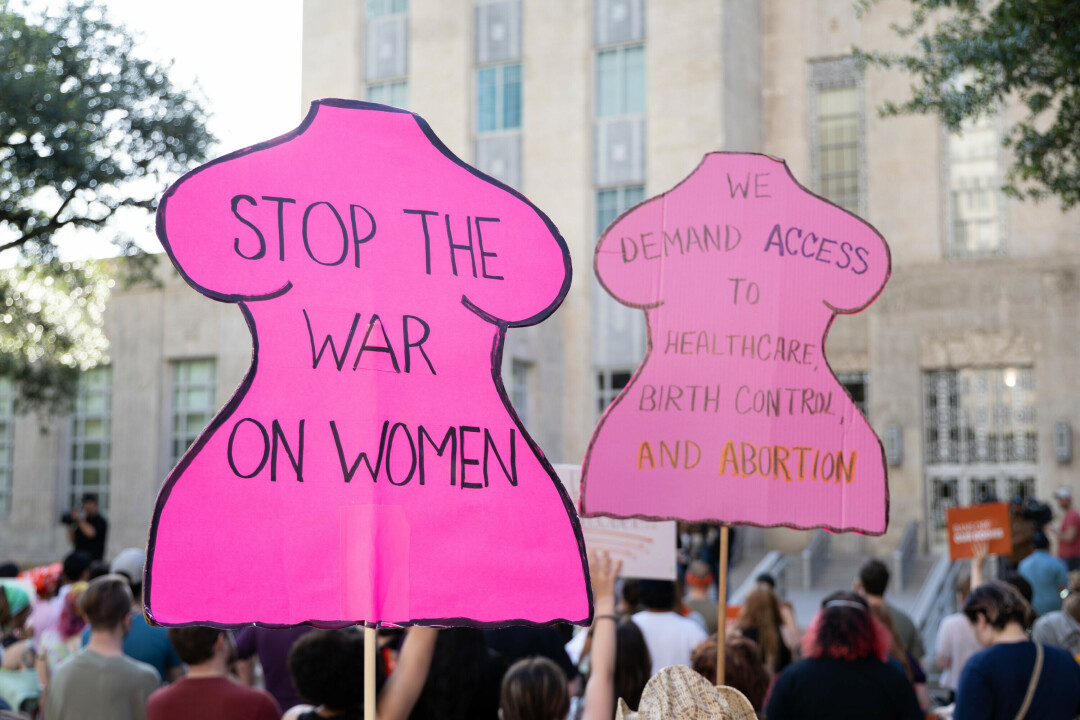 In almost a universe-instant this spring, the Republican Supreme Court has admitted in United States vs. Zubaydah that we approve of torture and the violation of international treaties on human rights, that there are concrete paths between church and state in the Maine and Bremerton, Washington religious freedom cases, that lawyers in Congress know more than climate change scientists in the Environment Protection Agency, that 450 million firearms aren’t enough to protect citizens, and most important, women are not equal to men, and for punishment for having sex, must have their feet nailed to the arms of the Christian cross while the head is on the footrest.

So, with one grand vulturous swoop for the six ideoidiots before they hit the road giving speeches to lobbyists corralled by blundering billionaires running from tax havens to tax heavens, they have destroyed our human rights values in the world, introduced their version of religious freedom by making Catholicism and the “Christian” prosperity gospel Prime Choice, made the world more polluted and heated to intolerable temperatures by castrating the EPA, created a tsunami of guns to increase our yearly 45,000 KIA and 100,000 WIA human sacrifices to the Second Amendment so good gun culture guys can duel in the National OK Corral, and, to top the swoop, made 33 million women of reproductive age second-class citizens by having ignorant politicians force themselves between women, their doctors, and their selection of abortion or pregnancy.

With a president who lives in some bipartisan Neverland with Strom Thurmond, then bargaining with his old friend Mitch McConnell who has turned the Senate from the once “most deliberative body” in the world into the “most useless body,” who wasted precious months with Joe Manchin, another narcissistic politician with only three interests: himself, his personal bank account and TV cameras every day.

He then revealed he was “shocked” by the 311th mass shooting so far this year! Where the hell was he for two years? We shoot 22 kids a day! A politician “shocked” by a shooting? Somehow, we elected a “has been” who was a “Never Trumper” in 2020.

Japan, with a population of 124 million in 2021, had one death by firearms. The court and the gun culture is beyond both stupidity and insanity. We need a new word: perhaps “Insanistupity?”

Is it possible women can save our democracy from the Fourth Reich?
The men of this so-called democracy for 246 years have done such a piss-poor job of retaining even the shards of it, I was going to write about how American women were going to have to go to the 2022 booths in overwhelming numbers to elect a progressive Democratic Congress to conduct a successful restoration.

Women can save us from the horrors of the Fourth Reich. The greatest generation defeated the diabolical forces of Hitler’s Third Reich that ruled Germany from 1933 to 1945.

You see, historically, the First Reich of the White Supremacists was the medieval Holy Roman Empire which lasted until 1806. The Second Reich survived from 1871 to 1918 when White German Aryans tried to rule all of Europe. Then came Hitler’s attempt to create a White Third Reich horror by blaming Jews for Germany’s loss in World War 1.

Then his Brown Shirts and SS used Kristallnacht and gold stars to attempt to eliminate 11 million Jews, countless Roma-gypsies, and millions of the German LBGTQ+ community, ending with a “perfect” Aryan White society called the Third Reich.

Trumplicans and millions of “Christian” White Supremacists have already started the Fourth Reich with the support of greedy capitalistic billionaires and millionaires who think they should rule the United States because they made lots of money. They have bought Congress, the Supreme Court, and dozens of “think” tanks supporting White Nationalist ultra-right forces on Fox News and Steve Bannon on the Internet, and bottle-feed little Trash Limbaughs and Scott Hennens on local radio stations.

After all, a country with a powerful Supreme Court that can make 33 million American women second-class citizens from a Catholic confessional, that can destroy the planet with heat and pollution by negating life-saving EPA regulations, that can turn the entire country into a USA OK Corral with 450 million firearms of every carry-and-conceal description, that puts an arrogant, ignorant and stupid politician between every medical doctor and patient in the land, that destroys the reputation of a nation that once led the world in human values, that only the “Christian” religion is the only “salvation” religion, is a rudderless Titanic headed for a huge iceberg. Can women stop it in time?

In the 13th century Roman Catholic Thomas Aquinas wrote: “Every woman is birth defective, an imperfect male, begotten because her father was ill, weakened or in a state of sin when she was conceived.”

When Roman Catholic Martin Luther pounded on the door of Wittenberg church in the 16th century, he had to believe the following: “If a woman grows weary and at last dies, it matters not. Let her die from bearing, she is there to do it.”

Someone in 1Corinthians 14:34 in the Bible agreed: “Women should remain silent in the churches. They are not allowed to speak, but must be in submission, as the law says.”

Other men in the Bible remind wives where they belong: (Ephesians) “Wives should submit to their husbands in everything”; (Timothy) “It was the woman who became a sinner, but women will be saved through childbearing”; and (Corinthians) “Man did not come from woman, but woman from man.”
Well, I guess that settles that little problem. Pope Francis just announced he is appointing some nuns to Vatican committees. Makes it sound like a big deal. Why does he remind me of Joe Biden?

Why are so many Republican women throwing their panties at Trump?

I think it will take about 40 million poor and lower-class women to move women back to first class. We have lots of rich women in the country who wish to remain so, so they will continue to vote for Trump and throw their panties at him – unless he goes to jail for treason.

Hilda Back of upper-level Woodlands, Texas, left her mansion to go to New York to see Dr. Andrew Jacono, a famous and expensive plastic surgeon, for major repairs to her 63-year-old face.
She wasn’t thinking at all of poor Texans who don’t have a home or enough to eat when she made this comment: “I have a Rolls-Royce, I have three homes, I have everything I could possibly want, but I was still depressed.”

For her medical cure for depression, she had a brow-lift, upper and lower eyelid reconstruction, a face-lift and earlobe and nose reconstruction. For all that nipping and tucking, Hilda’s bill came to $230,000.
I wonder if she can recognize a depressed hungry child back in Texas. Dr. Jacono has months-long waiting lists. I suspect his customers will not vote Democratic. Narcissism is almost an exclusive Trumplican fatal disease – except for “moderate” Democrat Joe Manchin.

Next, we have that famous South Dakota Trumper, Governor Kristi Noem, who gets her panties ready to throw every time King Donald utters psychotic, irrational blivets. Remember: a blivet is two pounds of shit in a one-pound bag. She helped spread COVID around the country with her Sturgis biker rallies of 500,000 transmitters – and is never without a shotgun or semi-automatic rifle in those campaign landscape shots. She keeps her panties at the ready for 2024.

South Dakota is just one of 11 states that have no exception for rape or incest when it comes to pregnancy. In order to get an abortion in Idaho, a “childbearing” child or woman must file a police report about her pregnancy. Will she file one when threatened by a father, uncle, cousin, or the next-door neighbor?

Why would Adam-dominated legislatures pass such cruel laws? It’s to control all those sinful women cavorting in their Gardens of Eden.

Noem is a forced-birth pro-lifer. So, what if a 10-year-old child is pregnant from a rape! She must bear that child. That’s God’s law! What are the odds this is a death sentence for the bearer?
A normal birth by an adult woman is 14 times more dangerous than an abortion. A birth by a poor woman is 30 times more dangerous.

How many ob-gyns would agree a 10-year old is physically and mentally capable of birthing a normal child? The evangelical “Christian” and Pope John Roman Catholic ideological-idiots posing as caring politicians love the fetus and then hate and neglect the child.

What is the ultimate goal of the six ideoidiots on the Supreme Court?

Could it be governing the Divided States of America with the politics of theological Dominionism? This is when “right-thinking” Christians enforce a biblically derived mandate to take control of all aspects of government and society.

All Americans should Google “Dominionism” so they understand the importance of banning abortion, putting millions of firearms in the pockets of grocery shoppers (after all, God gave us the sacrament of the Second Amendment), restoring Christian prayer in schools with Muslim, Jewish, and Great Spaghetti enthusiasts, supporting Catholic schools with federal tax money so they can spread more Vatican bullshit, destroying climate change regulations “because God will never allow the earth to become uninhabitable,” and that torture is fine as long as it’s in God’s hands. This is the Christian Nationalist movement supported by White Supremacists, hundreds of illegal “militias” armed with millions of AR-15s, the nutty QAnons, and the Trump cult.

There is that old expression about “chances are slim to none that we will succeed in this endeavor – and Slim is out of town.” With a president and White House out of town a lot and accomplishing very little while in it, Biden and his “everything is normal” administration is failing to attract a strong majority of the 85 million eligible young voters, particularly women, who did not vote in 2020.

Men and religion have brought us to the point where we are killing each other, starving each other, bankrupting each other, and threatening each other with rape, hanging and burning at the stake. Many men seem to be itching to pull triggers in the civil war. And Slim doesn’t give a damn.

Only the woman vote in 2022 and 2024 can save democracy because they seem to be the only adults left.

P.S. Why don’t we defund the Supreme Court?