An unusual opportunity arose on Tuesday, June 28, when I heard through the grapevine that two acts based in New Orleans were going to play at Cedar Lounge in Superior. Since I am crazy for New Orleans music and culture, I hot-footed it over there.

The local band, Field Birds, was first up but unfortunately I missed it. (I heard them play during Homegrown and they are a great bluegrass act.)

The second act, Tasche de la Rocha & the Psychedelic Roses (actually a duo, rather than the expected larger band), had just begun playing when I arrived. The music produced by Tasche, who sang and played acoustic guitar, and her sidekick, Roy Brenc on standup bass, was intriguing, unique but not conventionally New Orleans in sound.

Original compositions highlighted Tashe’s fulsome, piercing and occasionally gritty voice. They were wonderfully balanced by Brenc’s bass bowings. On other tunes, he plucked out earthy rhythms to undergird her soaring vocals.

Since no tip jar was in evidence, I picked up her CD, Gold Rose. That album is comprised of one cover and 11 originals – all different from those she sang that evening – and have a certain Billie Holiday inflection that I liked, though I am not a huge fan of that diva. (The many times I have heard David Sedaris’s hilarious imitation of Holiday singing “Silent Night” in his SantaLand Diaries, may be the reason!)

Yes Ma’am was a trio, with Matt Bracken on dobro, Roy Brenc on bass and another player (sorry, I didn’t get his name) on banjo and harmonica. These guys had a far more traditional New Orleans vibe, having started out 10 years ago busking on Bourbon Street. The group electrified Cedar Lounge, conveying what is most exciting about New Orleans music.

Bracken also played a suitcase drum, a tambourine and service bell with his feet to add a catchy rhythm to their songs.

An original tune was “Weight of the Squirrels” – a sad but funny confession of caring for squirrels before devouring them. Brenc strutted his stuff on bass in distinct contrast to his more muted accompaniment to de la Rocha.

The two groups were just ending a grueling month-long, 25-city tour through eastern U.S. and Canada and the Midwest, so they were in tiptop form. It would be worthwhile to track both down in NOLA if you are headed there. Otherwise, check them out on Facebook where there are numerous recordings to enjoy. 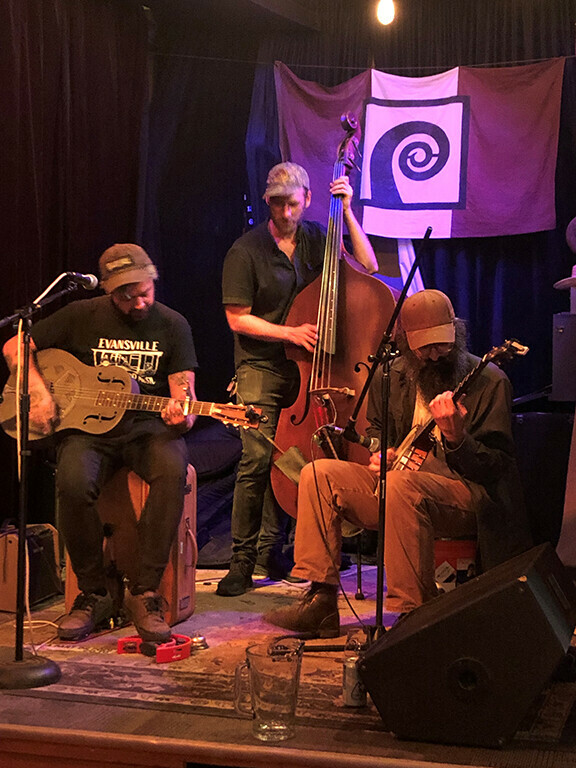 Two evenings later, on Thursday, June 30, I got to bask in the wall of sound produced by Duluth Transit Authority at the West Theater, along with a nearly full house of mostly older folks. We were all transported back to our young adult lives as we reheard and remembered hits by the band, Chicago.

The 12-member DTA (with sometimes rotating horn players) recreated the instrumental makeup of Chicago and blasted out one memorable song after another, including “Feeling Stronger Every Day,” “Does Anybody Really Know What Time It Is?,” “You Can Count On Me,” “We Can Make It Happen,” “Wishing You Were Here,” “Only The Beginning,” “25 or 6 to 4,” etc.

Also, they included what they termed “deep tracks” that only devoted Chicago fans would recall from listening to the band’s albums, for instance, “Mississippi Delta City Blues” and “South California Purple.” And, knowing their audience, the band performed the Blood Sweat & Tears’ hit “Spinning Wheel” from 1968.

Two female vocalists, along with band captains and lead vocalists Paul Lemenager and Greg Moore, were in great form, hitting every note with conviction.

Then there was the incredible, tireless horn section, including the animated trombonist, Will Collins. Joe Anderson wailed on alto and baritone saxophones to great effect. Late in the show he flaunted his abilities in “Color My World” with a sweet flute solo.

DTA’s members range in age from old to young and everything in between. The youngest members were Tommy Kishida, who played the conga, and Manny Eisele on bass guitar. They were every bit as fabulous as all the rest of the players.

One can understand why DTA has a devoted following who filled the theater for a satisfying two hours of musical memories.