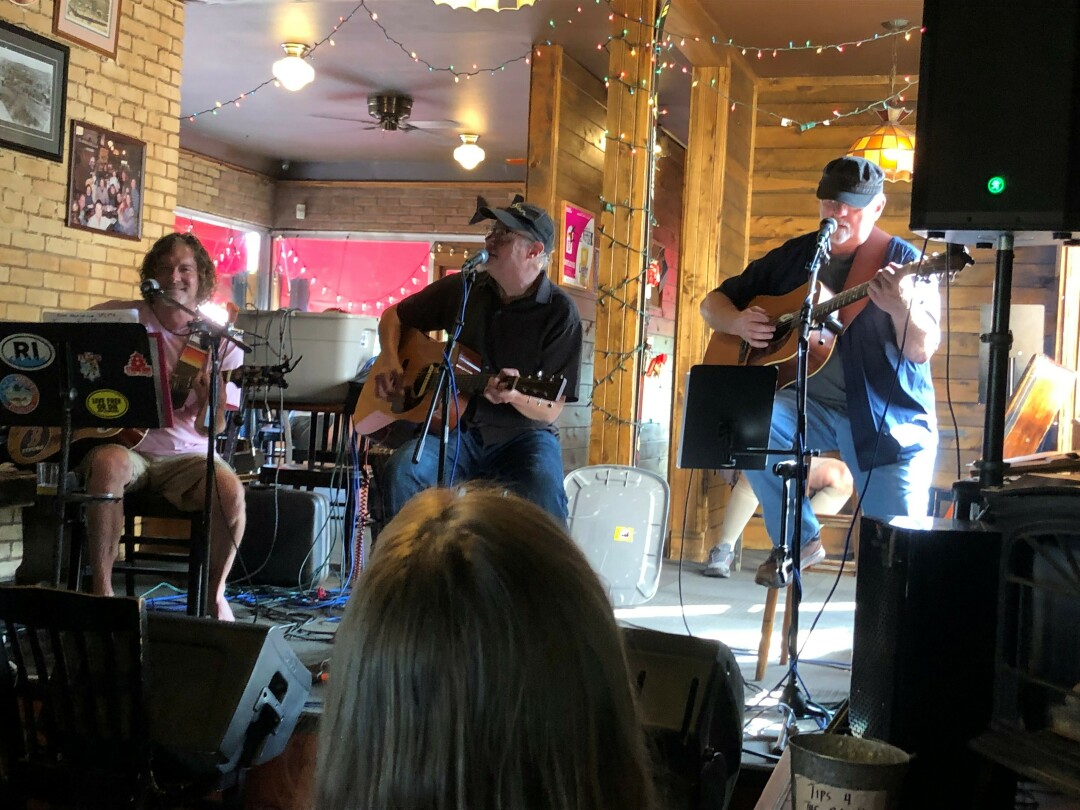 The first week of summer brought a new word into my musical vocabulary: djbembe.

It’s a goblet-shaped drum of West African origin, played masterfully by Rick Bruner as a member of the trio Ten Crow Moon. I was fortunate enough to hear the group this past Wednesday, June 22, at Sir Benedict’s Tavern on the Lake, a venue I generally pass up due to the cramped space, noisy bar crowd and no dance floor.

However, I was pleasantly surprised that this band was able to compete audibly with ambient sounds.
From numerous comments made on stage that evening, I understood this trio hadn’t played together for a couple of years but that they are back in biz.

All three members – Daryl Yankee, Doug Olson and the aforementioned Rick Bruner – play guitars and sing. (Yankee is also a member of Hodag & Hooch and Bruner is also in the band, Boxcar.)

They performed two sets of compelling songs, both covers and originals. The first I heard, “Cain’s Blood,” immediately put me in the mood to hear more. After a song by country artist Chris Stapleton, they switched it up with an interesting interpretation of Dylan’s “Girl From the North Country.”

Bruner sang his 2007 original, “Blue Tile Floor” before playing the djembe for the cover of “Ever Since New York” by Harry Styles. One of the most notable pieces was an original tune by Doug Olson, “Hands on the Wheel,” that was written to promote awareness of wheelchair accessibility issues. Audience participation on the chorus made it particularly memorable.

The energy of this trio was something to behold. Daryl Yankee’s enthusiastic leg thumping to keep time drove the rhythms on many of the songs. Bruner’s drumming on the djembe did so as well.

This is certainly a band to keep tabs on in the weeks ahead as they will be playing throughout the region.
On Friday, June 24, I made it over to Earth Rider to check out Canadian Dave Rave and his Minnesota band, the Governors. It was a brisk evening accounting for the small turnout. They rocked, but one had to feel for them up on the new stage in the breezy chill.

The songs I heard them perform included “In The Passenger Seat,” “Long Way to Go” and “Wake Up.” Next up was Rich Mattson and the Northstars. It was one too many cool evenings for me, thus I was forced to move indoors. I will need to catch them another time. 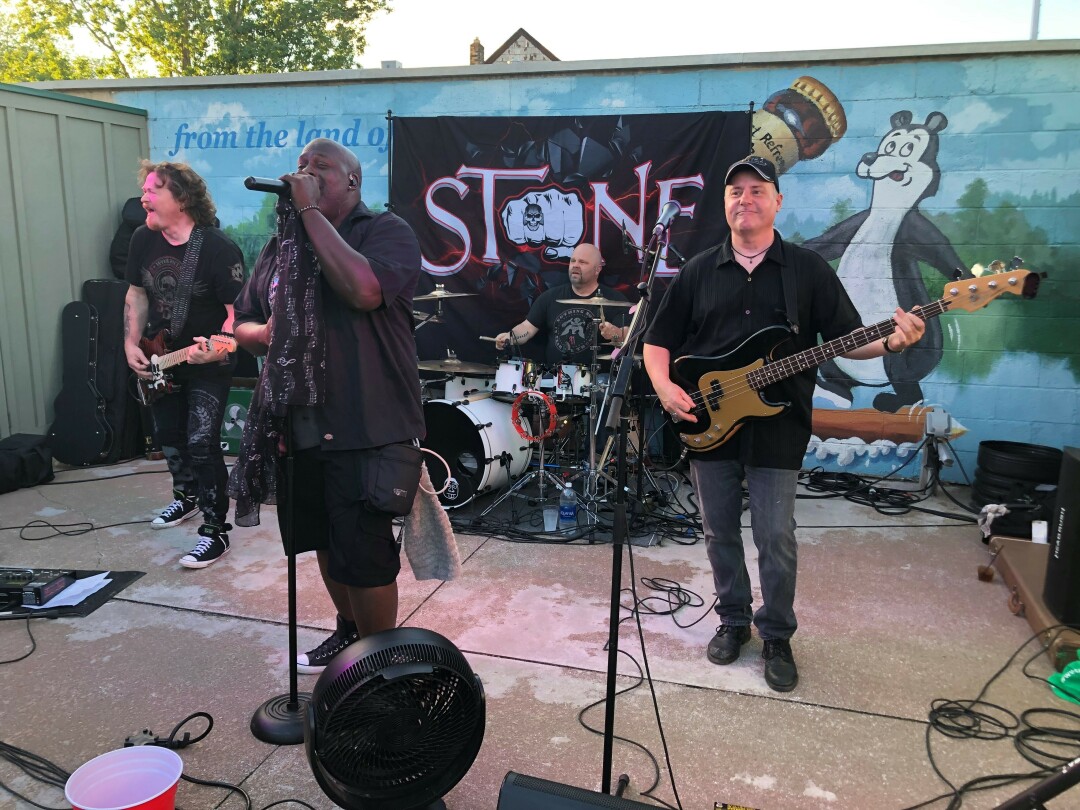 Stone at Jack’s in Superior. Photos by Jillybones.

The next evening was gorgeous with temps in the mid-70s, under a blue sky dappled with clouds reflecting the pink peach glow of the setting sun.

It was the perfect time to check out Jack’s outdoor courtyard in Superior, which was hosting the band Stone, made up of vocalist Ahmad “Red” Williams, David Draper on bass, Roger Moore on guitar and Randy Milinkovich on drums.

What a wild Wisconsin crowd turn-ed out for this heavy metal band – lots of tattoos, bikers, bawdy tee-shirts and middle-aged partiers made for fun people watching. Plenty of folks knew the lyrics to all the songs (unlike me) and filled the dance floor (me included) as the band played “Love Will Find a Way,” “Going Off The Rails,” “We All Die Young” and “I Want To Take You Higher.”

The venue was wonderfully designed to accommodate a band, those wanting to listen, those just wanting to drink and those of us wanting to dance.

Too, the recreated vintage beer-themed murals lining the brick walled enclosure was a visual treat. It’s definitely a venue I will want to revisit this summer.