When classical met the blues 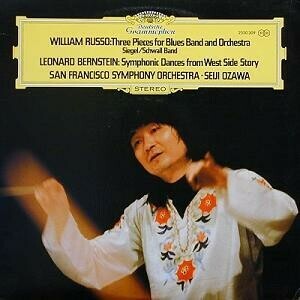 News of the June 19 death of guitarist Jim Schwall, as announced in last week’s Reader, sent me to my vinyl collection, at least the LPs – I still haven’t gotten around to sorting the 45s after the tumultuous move that brought me to Duluth and forced me to keep the records in storage for two years.

Specifically, I wanted to hear what was probably the most unique project Schwall was involved in with the Siegel-Schwall Band, and that was performing and recording the blues alongside the San Francisco Symphony under the direction of Seiji Ozawa.

I’ve got both the 1973 Deutsche Grammophon LP and the 45 single of Three Pieces for Blues Band that was released of this historic pairing (I remember finding the single in a Door County thrift store, but forget where I found the album).

I’ve talked with both Corky Siegel and Jim Schwall many times during my newspaper career, but in 2018 I specifically talked to Corky about teaming up with Ozawa (probably because I had just recently found the single at the thrift store).

There are also extensive liner notes in the album telling the great story of this unique pairing of blues and classical music.

It goes back to the beginning of the Siegel-Schwall Band, formed in 1964 with Schwall on guitar and Siegel on harmonica. They had residencies at a couple of key south side Chicago clubs that helped establish their reputation and where they played with all the greats – Muddy Waters, Little Walter, Howlin’ Wolf, Bo Diddley and many more.

It was while serving as the music director of The Chicago Symphony’s summer Ravina Festival that classical conductor Seiji Ozawa first heard and fell in love with Siegel-Schwall in 1966.

“Seiji was a big fan of Siegel-Schwall and the blues,” Siegel said in that 2018 interview. “I think he was very much influenced by The Beatles, who were doing pretty outrageous collaborations with other forms of music.”

Ozawa’s idea was to pair a blues band with a symphony orchestra. Siegel said in hindsight it was a historic moment, but at the time it was just another gig.

“In retrospect, it was certainly groundbreaking, but I’ve got to tell you, naivete goes a long way,” Siegel said. “We said, OK, and then focused on making it happen. I never thought for a moment that this was historic.”

The summer of 1967 Ozawa conducted the Chicago Symphony in a performance of William Russo’s Symphony No. 2, his Titan Symphony.

Russo, founder of the Chicago Jazz Ensemble and composer of groundbreaking orchestral scores for the Stan Kenton orchestra, was tasked with writing the symphonic score.

Russo was teaching and conducting at Chicago’s Columbia College. When Ozawa attended a concert featuring some of Russo’s jazz pieces, he knew he had his man for a blues concerto.

“The way Russo and I and Seiii approached it was a first because we wanted it to be a collaboration between the symphony and a blues band, not a symphony backing up a blues band,” Siegel said. “We thought of every possible way of making this a collaboration with classical and blues, rather than highlighting the quartet in the piece.The focus was the collaboration. That’s what really made it different.”

Russo later commented and is quoted in the liner notes about his Three Pieces for Blues Band: “All it is is 89 choruses of the blues, and it’s the hardest thing I ever did.”

The first performance was at Ravina on a Sunday afternoon, July 7, 1968. Long-haired fans of Siegel-Schwall mixed with traditional classical ticket holders, and all were “audibly receptive” to the work, according to the album liner notes.

And that same day the band broke up. Siegel and Schwall went their separate ways until reforming again in 1970 with Rollo Radford on bass and Shelly Plotkin on drums.

Siegel said he remembers the very first question about that classical-blues collaboration as if it were yesterday.

“Seiji and Bill Russo turned to me and said, ‘So how are we going to do this?’ Literally, I will never forget, that was the first question they asked. I said, let’s start with Charles Ives and work from there, which means we’ll have classical and blues juxtaposed without any relationship to each other. Charles Ives did a piece called Music for Two Marching Bands, so the concept was let’s have music for symphony and blues band and have them playing totally different things together. If you listen to the first part after the introduction, you’ll hear that’s exactly what’s happening – Siegel-Schwall’s playing a shuffle and the symphony’s doing something else.”

Yes, The first piece especially sometimes sounds as if two very different radio stations are fighting to be heard, and just when everything seems on the brink of apocalyptic collapse, the blues band comes shuffling back in, with Jim Schwall’s bright, liquid guitar notes leading the way.

That piece also begins with Siegel blowing a melancholy harmonica that might have come right out of Ennio Morricone’s soundtrack for Sergio Leone’s Once Upon a Time in the West.

Siegel also recalled that composer, conductor and band plotted out the piece with room for the band to improvise within the agreed-upon structure.

“Let’s have the blues band play an ostinato and the symphony plays what fits on top of that,” he said. “Then let’s have the symphony play an ostinato. Blues is based on ostinato, repeated phrases. You get into a hypnotic sense or trance. Siegel-Schwall would improvise on the symphony’s ostinato. Then we had every mathematical possibility of those two forms and work up from there. It was a very mathematical planning of how we were going to juxtapose blues and classical and highlight each other.”

In 1972 the Siegel-Schwall Band and the San Francisco Symphony with music conductor Seiji Ozawa recorded the piece for the esteemed German classical label, Deutsche Grammophon.

Suddenly, Corky Siegel found himself much in demand with the classical crowd who wanted to appeal to new audiences. Eventually, in the 1980s, it led him to form a new band comprised of himself and classical musicians, dubbing it Corky Siegel’s Chamber Blues.

“I started getting offers all over the place,” he said. “I was approached in 1975 by the San Francisco Symphony, Arthur Fiedler and the City of San Francisco to write some symphonic arrangements of songs for orchestra. I had never written anything in my life before. I wrote a symphonic blues and performed it in 1976. From there, the National Symphony heard it and the Grant Park Symphony of Chicago wanted me to write for them. All of a sudden I found myself in the middle, being a composer in this, with Russo’s mentoring. That’s when Chamber Blues happened. First of all, I fell in love with the concept. It took me over. Then I realized it was hard to get the symphony in a bus. That’s when I started Chamber Blues. I’m a practical person. I stopped playing saxophone because it didn’t fit in my pocket. And I started writing chamber music because the symphony didn’t fit in the bus.”

According to his Chamber Blues website, a new record, MORE Different Voices, is due in September, along with a concert tour.