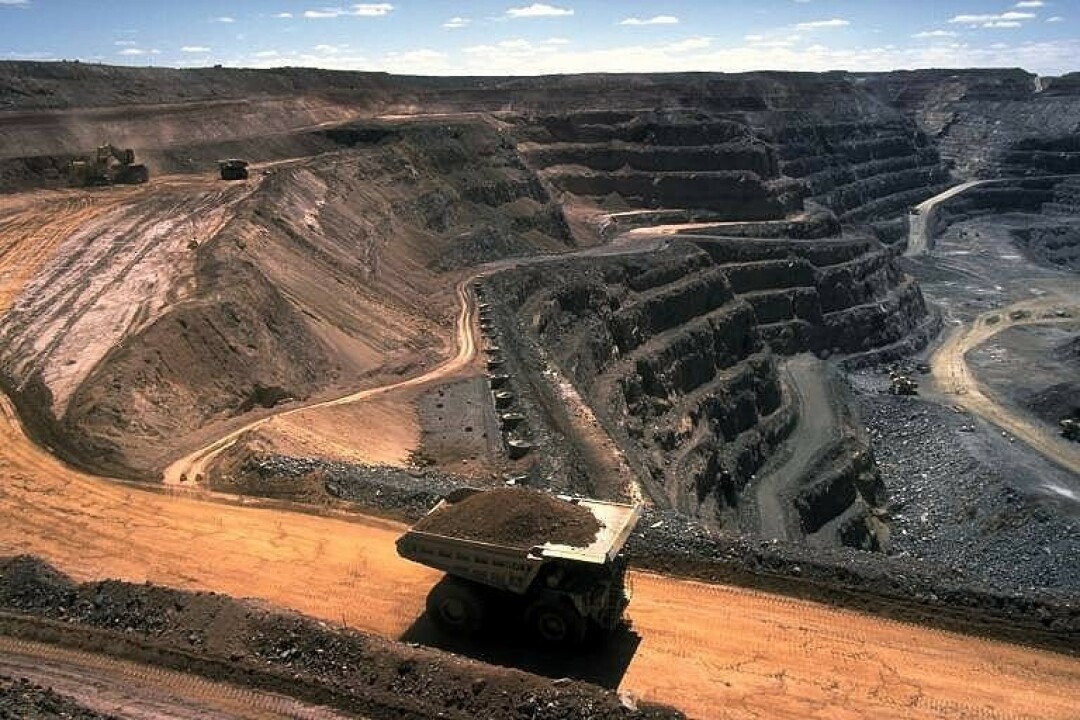 “...the unifying theme of collapsed civilizations is the collective blindness to the depletion of natural resources.” From Magnetic North by Sara Wheeler

“If life is a race to use up everything we have, who exactly will win the race?” Novelist Barbara Kingsolver in Small Wonders

Mining is a very wasteful, destructive, polluting process. As available mineral resources are depleted the waste and destruction intensifies. The easy to extract, high grade ore is gone. We are now reduced to mining the low grade dregs.

In Minnesota the rich iron ore deposits were largely consumed by WW2. Wisconsin doesn’t have much high quality ore of any kind. It has only pockets of low grade ore which are often not profitable to mine.

But hope springs eternal. The gold rush mentality, and the quest for an economic savior for poor northern areas, is strong in both Minnesota and Wisconsin

In Wisconsin a Canadian mining company has an exploratory license and is planning to do drilling for gold and copper in north-central Wisconsin. Green Light Metals believes the Reef deposit in eastern Marathon County and the Bend deposit in Taylor County have “economic interest” that warrant further exploration.

The company says the Bend deposit, located within the Chequamegon-Nicolet National Forest contains 4 million tons of copper and gold. They say the Reef deposit contains about 454,000 tons of gold reserves.

This sounds impressive but it is misleading information. These figures are estimates of the expected available ore and are not the actual amounts of gold and copper that can be realized. Ore is the rocks that contain the minerals from which a metal is extracted by processing.

It is difficult to find accurate, current data on how much metal is possible from mineral deposits in Wisconsin. What information is available suggest it will be much less than the rosy figures the company suggests.

One report on the internet (with no date) was on the Bend deposit and written by geologist Dr. Bill Cordua, University of Wisconsin-River Falls. He says “The deposit’s reserves are estimated at approximately 2.2 million tons yielding 2.77% copper, 0.05 oz of gold and 0.43 oz of silver per ton.”

The Wisconsin Sierra Club agrees. They point out mining involves multiple stages of extracting and purifying the target metals. For some mining operations this produces 99% waste byproduct to gain 1% in usable metal. This waste is usually toxic.

The Sierra Club says these inconvenient facts show mining will not be an economic bonanza for northern Wisconsin. The poor, low grade deposits and fluctuating metal prices will only create boom-and-bust short term jobs. The waste, pollution and damage to other economic activity will not be worth the long term clean up costs.

Copper and gold mining is sulfide mining. The ores contain sulfide, which will result in unavoidable toxic waste and water pollution. When sulfide ores are exposed to oxygen, it produces sulfuric acid and heavy metal-contaminated runoff. This is inherent to mining and essentially impossible, or economically unfeasible to prevent or mitigate.

To date all mining of these ores has created long-lasting pollution. Mining done by the Romans 2,000 years ago is still leaching toxins.

For a good short read on mining in Wisconsin go to The Sierra Club’s article Metallic Sulfide Mining.

Mining advocates claim the Flambeau mine in Wisconsin proves sulfide mining can be done safely. The mine was a 35-acre, open-pit copper, gold and silver mine located near Ladysmith. It operated between 1993 and 1997. The mine produced 181,000 tons of copper, 3.3 million ounces of silver and 334,000 ounces of gold. Although the surface reclamation looks good, environmental groups say surface and ground waters are still being polluted.

In 2014 water samples from the stream did not meet DNR water quality standards. Twenty years after the mine closed there is still heavy metal pollution in ground and surface water.

Wisconsin used to have strong mining laws. Wisconsin had a “prove it first” mining law especially targeted at sulfide mining. The law was passed under Republican Governor Thompson in 1998 with overwhelming bipartisan support (29-3 in the Senate and 91-6 in the Assembly).

The law required mining companies to prove that a sulfide mine had operated for 10 years (and closed for 10 years) without polluting groundwater and surface waters with acid drainage. Wisconsin was the only state with this requirement which shows how Wisconsin used to be a leader.

In 20 years, no mining company was able to provide this proof. This “conservative” (in the true meaning of the word) law errs on the side of protecting Wisconsin’s water. In the absence of proof that mining can be done safely, protecting water must come first. Water is the most important natural resource.

This common sense requirement, however, does not fit the radical Republican ideology. For them the “free market” and profit overrides all other considerations.

In 2017 the Walker administration repealed the “prove it” law. In addition they weakened wetland and groundwater protections, reduced the time DNR regulators had to review mine plans, limited legal challenges to state mining permits, exempted mine companies from fees that cover costs of handling hazardous waste and reduced the financial liability for mining companies for later clean up costs.

We need metals but recycling and mining landfills have more potential than mining low-grade deposits. Our garbage has higher concentrations of metal than many underground ore deposits.

A number of online sources say landfills will be the mines of the future.

Mining our garbage is a good idea, but it is also a warning. Our excessively consumptive, throw-away lifestyles are not sustainable. In our race to consume we should remember, “Only when the last tree has been cut and the last river been poisoned and the last fish been caught will we realize we cannot eat money.”