Democrats can and must win 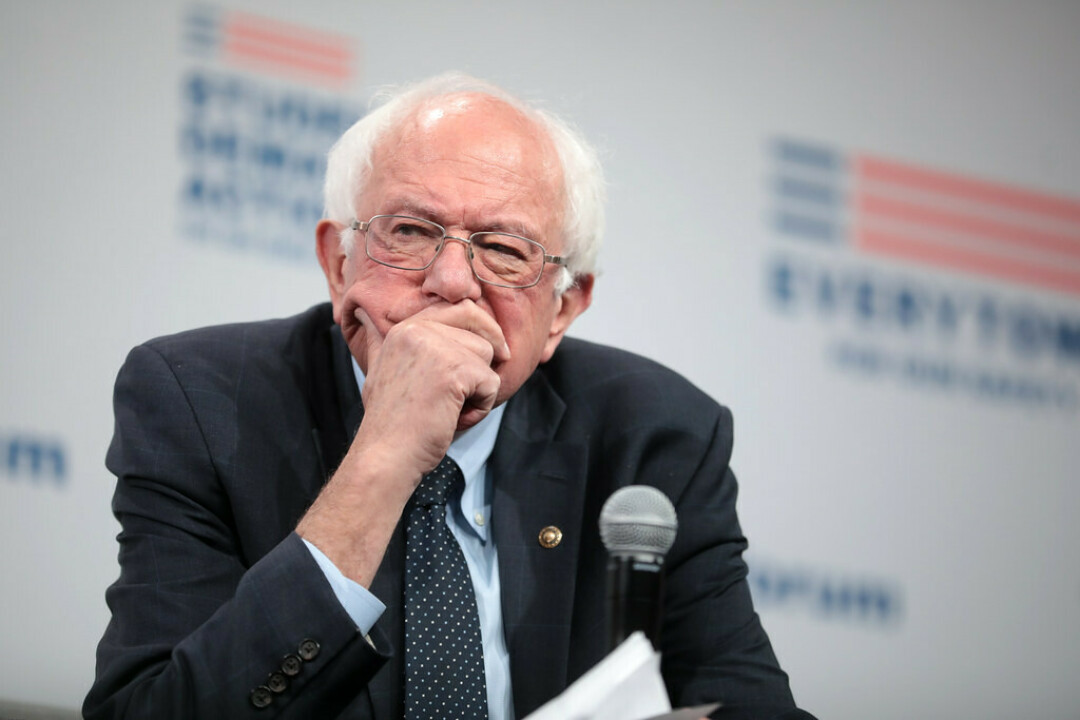 Remember: 85 million eligible voters did not vote in 2020

There’s only one person in Washington who can convince young voters of every color to go the polls in 2022 en masse and vote for Democrats at every level of government – and he’s not even a Democrat.

He is the most popular active politician in America. While Joe Biden falls off bikes at a Delaware beach, this leader constantly does the work necessary to win many votes.

Vermont Senator Bernie Sanders calls himself a Socialist, but he is a combination of Moral Capitalist and Democratic Socialist. He believes the richest country in the world has an economy strong and powerful enough to provide FDR’s Four Freedoms and a productive life for every citizen.

There are only a few countries, mostly Scandinavian and European, that provide freedom from want and fear and freedom of speech and worship.

The United States is not one of them.

Sweden, Norway, Finland and Denmark have been polled the best countries to live in for decades. Our neighbor Canada outranks us on the list.

The Divided States of American is usually about #20. A homeless family in 114-degree Phoenix has a major problem. Senator Bernie Sanders understands that, communicates the problem with empathy, gusto and anger, and attempts to do something about it.

As an example, Social Security, the lifeline for many young and old, will likely be insolvent by 2033. Republicans and Trumplicans have refused to join a bipartisan effort to fund the program adequately. Some have been trying to dump Social Security for a century.

The Biden administration is, as usual, doing nothing about it, so Bernie has put together a Senate bill that will increase payments by $2,400 a year and fully fund the program until 2090! Bernie always does his homework.

Bernie sums up his bill this way: “Our job is not to cut Social Security, is not to raise the retirement age, as many of my Republican colleagues would have us do. Our job is to expand Social Security so that everyone in America can retire with the dignity that he or she deserves and that every person in this country with a disability can retire with the security they need.”

Bernie has a simple solution for funding increases and making the SS fund solvent for 75 more years. Because of the present $147,000 cap, a person making an income of $1 million a year stops paying Social Security taxes at the end of February. A fireman or an elementary school teacher pays 12.2% every month the entire year.

Bernie says the cap is “absurd and grossly unfair.” Of course, it is. Bernie’s bill has the support of all major unions and 50 other organizations that lobby for the poor and middle class.

Now we have a mass Trumpian political hysteria. New York Times writer Charles Blow, in his “Normalizing Mass Hysteria” of June 15, writes about a few of the many mass hysterias Homo sapiens have suffered through since we trudged out of Africa about 300,000 years ago.

He writes about the dancing plague of 1518 in Strasbourg (France) of the Holy Roman Empire where there was an “inexplicable” dancing epidemic where people danced until they fell dead of strokes and heart attacks, a sort of “suicide by dancing” mass plague.

He lists the Salem witch trials of our late 1600s when hundreds of American women were accused of witchcraft which resulted in the hanging of 19 women, the death of several while in prison, and one witch that was crushed to death by piling stones on her chest.

We have had more than our share of cult leaders such as David Koresh of the Waco Branch Davidians who claimed he was the Messiah so he could have sex with all the wives and daughters of his followers. Jim Jones of the Peoples Temple led all of his staunch followers to cyanide-laden deaths in the Guyana jungle.

Genghis Khan was possibly the greatest cult leader of all time, leading his followers to capture much of the civilized world.

In 1962 very funny things happened in Tanzania when hundreds of young school children fell victim to what is known as a laughing epidemic. The children would suddenly burst into hysterical laughter that really didn’t quit. They finally experienced piercing pain, fainting spells and respiratory problems not associated with any kind of humor. Many developed rashes in the hysteria which lasted about a year. Fortunately, no child died directly from these problems although several thousand suffered from this weird hysteria.

We also see hysteria at concerts, protests and celebrations, but we now have millions of Americans victims of a political mass hysteria led by a national leader who endangers the national security of the Divided States of America.

In order to destroy the cult, traitor Trump has to do the perp walk

Donald Trump, driven by the triple demons of malignant narcissism, sociopathy and psychopathy, has displayed the ability to induce millions of his followers to believe his lies. He and his fanatical cult, which used to be a conservative political party instead of a Nazi-inspired radical white supremacist mob, are casting LBGTQ+ supporters as trans people “grooming” children to participate in sexual activity, history teachers that indoctrinate instead of teach critical fact history, and telling millions that COVID “restrictions” such as masks, vaccines and social-spacing regulations are toxic and not necessary.

They vote for him and threaten to kill his enemies such as Republican Rep. Adam Kinzinger, his wife and their five-month-old baby. His accusations have led high school boys and young men to hundreds of mass shootings, many using AR-15s and Glocks with high-capacity magazines filled with military ammunition that shreds and explodes human flesh, destroying organs, bones and skulls.

More than 200 home-grown militias now possess thousands of military rifles with very high muzzle velocities, and buy tactical gear and body armor to ensure that a “tyrannical government” will not put them in concentration camps to “adjust’ their thinking.

Are we lucky he is a complete coward with bone spurs, five deferments, phony letters to his draft board and is even afraid to shake hands from fear of acquiring bacteria? Only time and the voters will tell.

Meanwhile, what is the most popular politician in the U.S. doing?

Senator Bernie Sanders keeps busy trying to convince 85 million eligible voters who did not vote in the 2020 election that the Democratic Party can help make their lives much better in 2022 and 2024 if they vote the straight Democratic ticket.

While President Joe Biden is falling off his bike, giving boring speeches during the day TV schedule, and going back to sunny Delaware on the weekends, Bernie keeps talking straight about what we need to do to have a country which is good for all the people in it.

Here is just some of his Democratic leadership policy positions:

“Corporate greed is destroying this economy. Right now, people all over the country are paying $5, $6 for a gallon of gas. Meanwhile, in the first quarter of this year, oil company profits were $921 billion, and they’re going to spend $88 billion on dividends and stock buybacks for their wealthy stockholders. This is outrageous. Corporate profits soar, working people can’t afford to fill up their gas tank. We need to pass a windfall profits tax now.”

Sleepy Joe murmured a couple of comments about companies making excess profits, but left it at that.
Bernie made very strong comments every day about the attempts of Amazon, Starbucks and Apple employees to unionize those huge companies so they could negotiate better salaries and working conditions.

In 2016 he kept pushing the teacher unions to strike to get better salaries, working conditions and improved funding from the states. Many of those strikes were successful. Sleepy Joe was almost silent about this effort.

Bernie keeps pushing his Medicare-4-All program whenever he takes a podium because a universal health care system, particularly a single-payer plan, would save us billions of dollars a year in cash, and research by the National Academy of Sciences USA just announced that such a program would save 338,000 lives a year.

It would have prevented COVID-19 from killing one million Americans, leading the world in the ratio of virus deaths. The research shows that one out of three deaths would have been prevented if we would have had universal care to start with.

The authors of the study say the research “is a stunning indictment of an inefficient system that leaves millions of Americans uninsured and underinsured each year. Americans spend more money on health care than people living in any other country, but the U.S. has sustained 16% of COVID’s global mortality burden while only representing 4% of the world’s population.”

We spend twice as much as any other country listed in the top 40 of civilized and industrialized countries, yet rank near the bottom, usually about 38th, in all medical results.

Our Alito-Thomas Supreme Court, with decisions on guns and abortions, has just morphed itself into just another political branch of government based in a Washington marble palace, thus committing legal suicide. The six originalists on the Court used the 18th century flintlock musket and rifle as the basis for their 6-3 decision on conceal-carry.

So here’s what actually happened according to six “justices” on Dec. 14, 2012, when 20-year-old Adam Lamsky, fresh from taking a couple of minutes to shoot a flintlock musket ball into his mother’s head, loaded their wheelbarrow with several muskets, at least 250 cartridges he had spent many hours preparing, spare ramrods, several extra flintlocks, extra pounds of 125-grain black powder, tools used to repair weapons in combat, and then entered the door of Sandy Hook Elementary and killed 20 first graders, six adults and then himself, making a total of 28 dead for the day.

According to flintlock musket and rifle experts, it takes two to three minutes for an expert to fire one cartridge and ball – if every weapon works perfectly and the shooter is in excellent physical condition. Lamsky fired 154 musket rounds in his massacre at the school.

If everything worked well, if every cartridge worked, if the right amount of powder had been put in the cartridge, if the flintlock fired perfectly, if the ramrod wasn’t bent, it would have taken him a minimum of about 7.6 hours to kill the 26.

One first grader, according to the coroner, had 11 bullets hit him, so to kill him, it took about a half-hour. In 2012, with a Bushmaster AR-15 and high-capacity magazines, Adam fired 154 military rounds in less than five minutes.